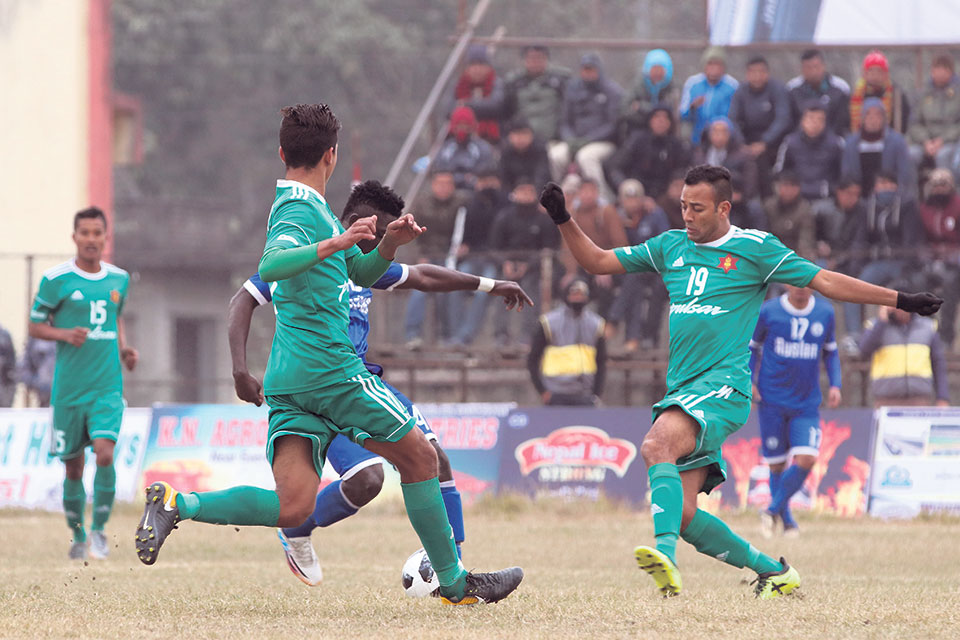 Players of Tribhuvan Army Club (green) and Three Star Club in action during a quarterfinal match of the Far-western Khaptad Gold Cup football tournament at the Dhangadhi Stadium in Dhangadhi on Thursday.

TSC defeated Jhapa XI 3-1 in its first match of the tournament to reach the quarterfinals on Monday, but the first division club could not continue its journey in the tournament after getting beaten 2-1 by TSC at the Dhangadhi Stadium on Thursday.

TSC went ahead, courtesy a goal from Nepal national football team’s striker Nawayug Shrestha in the sixth minute of the match. Suman Aryal extended the departmental side’s lead in the 49th minute. Nirajan Khadka pulled a goal back for TSC in the 53th minute to make the score 2-1.
TSC could not get back in the game as it wasted multiple chances to score. TAC also failed to utilize a lot of goal scoring opportunities.

TAC’s skipper Bharat Khawas was declared the man-of-the-match and was rewarded with Rs 10,000 for his contribution.

Head coach of TSC Megh Raj KC said that his team was pressurized throughout the match.
“We didn’t play bad, but we conceded two early goals in each half due to the mistake of our defense line, which made it difficult for us to make a comeback in the match. We kept the opponent under pressure most of the time in the second half, but unfortunately, we could not score,” said KC.

KC further added, “The result could not be on our side as our opponent scored early goals. This is football and it’s not always possible to win despite playing well.”

TAC’s head coach Nabin Neupane said he was satisfied with his team’s win, but said they could not play to their full potential citing the weather of Dhangadhi.

“We managed to score two early goals in both the halves. We were more focused on the defensive part rather than adding more to the lead after scoring those goals. So, we were kept under pressure in the second half,” said Neupane, “We were unable to play with our regular standard because of the weather. Despite all these things, we reached the semifinals by winning this game and it’s the most important thing, so I’m satisfied.’’

TSC, which had qualified for the second round of the Asian Football Confederation (AFC) Cup after finishing as the group winner in Mongolia in August 2016, had missed the opportunity to take part in the playoffs due to the negligence of Nepal’s football governing body ANFA.

The AFC had decided not to take in TSC for the tournament as ANFA had failed to submit the first division club’s registration on time.

The TSC had decided not to play any football tournament until ANFA gave them Rs 60 million in compensation.

The club had recently settled for a compensation amount of Rs 15 million in a deal with ANFA reached under the aegis of National Sports Council.

Laxmi Hyundai Manang Marshyangdi Club (MMC) will take on Agni Rupandehi XI in the last quarterfinal match on Friday. The winner of the match will play against TAC in the last four on Saturday.

Germany's dramatic win vs. Italy in shootout; advance into semis

BORDEAUX, July 3: Germany ended 54 years of misery against Italy at major tournaments by taking a familiar route to victory: The... Read More...