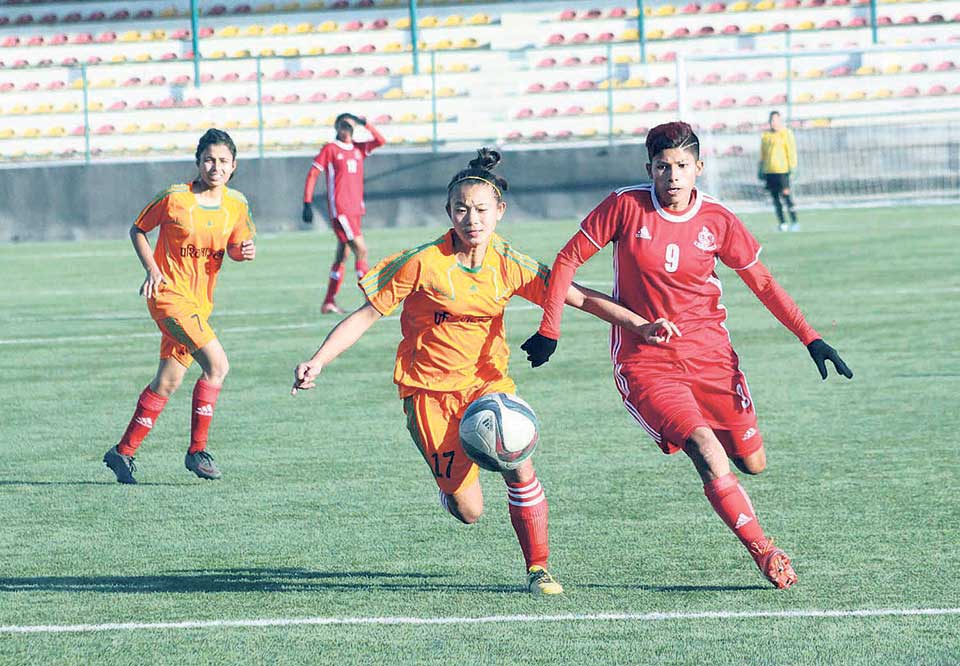 TAC thumped Mid-western Region with a scoreline of 12-0 scoreline with five goals from Sapana Lama and four from Sharmila Thapa at the ANFA Complex in Satdobato, Lalitpur. Deepa Rai scored a brace, while skipper Krishna Khatri added a goal for the departmental side.

Thapa gave the lead to TAC in the fourth minute of the match, while Khatri doubled the scoreline in the 11th minute. Thapa completed her hat-trick scoring in the 26th and 35th minutes. She also scored in the injury time to secure a big-margin win for TAC, which pushed them to the Super League.

Lama opened her account for TAC scoring in the 38th minute of the match, while she scored her second in the 53rd and completed her hat-trick in the 73rd minute. She grabbed her fourth and fifth goals in 80th and 85th minutes of the match.

Rai scored her two goals inside four minutes scoring in the 25th and 29th minutes of the match.

In the another match of the day, Sabitra Bhandari continued her impressive goal scoring record as she scored eight goals for APF as the departmental side beat Western Region 14-0.

Bhandari, who had scored 12 goals against Mid-western Region in the earlier match, opened her account in the sixth minute of the match.

She is now at the top of the goalscoring chart with 20 goals in the tournament.

Rekha Paudel and Anita KC scored two goals each, while Reuka Nagarkoti and Anita Basnet added a goal each for APF.

Paudel scored her goals in the 37th and 40th minutes of the match, while KC bagged her brace within two minutes scoring in the 58th and 59th minutes. Likewise, Nagarkoti scored her only goal in the 65th minute, while Basnet in the 77th minute.

After the win, TAC and APF have reached the Super League accumulating six points each with a game still to play.

Far-western Region will take on Central Region on Thursday, while Nepal Police Club (NPC) will face Eastern Region later on the same day.

A total of eight teams including five regional sides and three departmental teams are taking part in the competition.

‘Prem Geet 3’ to be released in China
3 hours ago