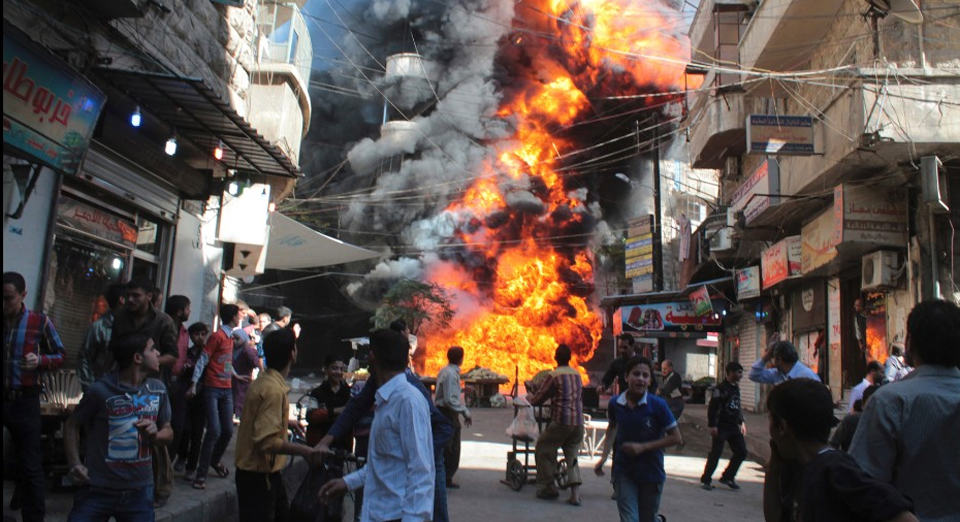 Meanwhile, the International Committee of the Red Cross managed to send a joint relief agencies convoy with aid for thousands of displaced into another part of eastern Ghouta, the town of Douma, the ICRC said.

According to Syrian Civil Defense, also known as White Helmets, the organization’s first responders were unable to reach the wounded in several other towns in eastern Ghouta because of the intensity of the assault. It said one of its rescue workers was killed in an airstrike on the town of Hazeh.

“They are burning Ghouta to the ground,” said Anas al-Dimashqi, a media activist and resident of Kafr Batna, a town also targeted in intense airstrikes Thursday.

Dimashqi, the White Helmets and the Syrian Observatory for Human Rights reported that government and Russian aircraft were using napalm-like incendiary weapons to spread fires in the towns.

Government and Russian forces also targeted a column of civilians trying to flee another town, Hamouria, early Thursday, according to the activists and the Observatory. At least 26 civilians were killed Hamouria on Wednesday, the Observatory said earlier.

The Syrian government, backed by its allies Iran and Russia, is determined to retake control of the once farming region just outside the Damascus, after seven years of war and bloodletting that has killed over 450,000 people and displaced millions.

More than 1,200 people have been killed since pro-government forces launched their assault on eastern Ghouta more than three weeks ago.

Damascus and Moscow have ignored a Feb. 25 U.N. Security Council resolution demanding a cease-fire for the entire country.

The eastern Ghouta region was one of the hubs of the uprising against President Bashar Assad in 2011 and was quickly targeted for a siege, mass arrests, and extrajudicial killings by security forces.

Government forces cleaved the region in two parts earlier this week, and isolated the area’s largest town, Douma, from the rest of the suburbs.

The 25-truck aid convoy organized by the international Red Cross, the Syrian Red Crescent, and the United Nations crossed into eastern Ghouta on Thursday, according to the ICRC, and was expected to deliver aid later in the day.

Damascus routinely blocks the aid agencies from delivering relief to opposition-held areas in the country.

The Russian military, meanwhile, said it had extended a “humanitarian pause” to operations targeting Douma through Thursday and Friday. It claimed the pause has allowed growing numbers of civilians to reach safety.

Maj. Gen. Yuri Yevtushenko was quoted by the Interfax news agency as saying that 131 people left the area through the humanitarian corridor on Wednesday. Maj. Gen. Vladimir Zolotukhin said some 100 people are expected to be evacuated on Thursday.

Pressure mounts to relieve 'hell on earth' in Syria enclave