Synergy between ideology and behavior will safeguard democracy: Leader Gyawali 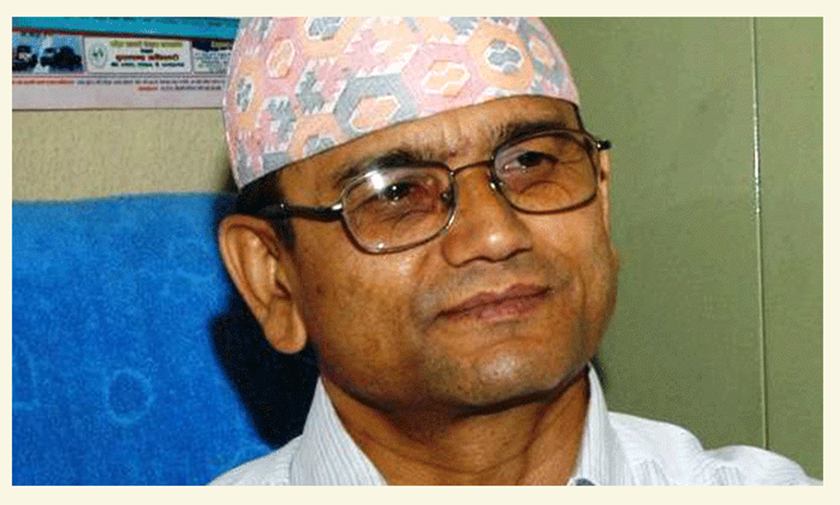 Despite being on the committee to distribute election tickets, CPN-UML’s vice chairman, Yubaraj Gyawali has publicly stated that he couldn’t compete in the elections because of expensive party tickets.  “To operate the party and accumulate election expenses, parties are obliged to be hierodule of the rich,” Gyawali said, “If this is to continue, it won’t take long before politics reaches in the hands of capitalists”.  Here is the full interview of Gyawali based on the conversation with Shree Ram Paudel.

It has been rumored that the Committee checked their blood pressure when giving party tickets?

Yes, it is true. We had to ensure 60-40 proportion and were busy sorting out district’s candidate recommendations till late on November 2. There was stress and we measured our blood pressure. My heart beats were stable because I was neither stressed nor had greed. I am concerned about my country and its citizens, not about party ticket.

How did the idea of measuring blood pressure arise at 11 PM?

It wasn’t a big problem. We just thought of checking blood pressure randomly.

As you said there are leaders including you did not accept expensive tickets. How expensive is it?

As a matter of fact, elections have been very expensive. Middleclass leaders and cadres cannot afford it. This is prevalent in CPN-UML as well as other parties.  It is necessary that all parties pay special concerns and formulate special laws for election. If parties do not take it seriously, the nation will be in grave danger. At present, parties are being trapped at the hands of capitalists who are trying to use the nation at their own vested interest. If this situation continues, the base of democracy will be weak.

Many middle-class representatives haven’t been able to clear their election debts. I have met more than a dozen leaders who couldn’t compete in the elections due to financial constraints; even when they are capable, popular and won elections in the past.

As elections got expensive, the government had proposed One Rupee for One Vote. The issue was discussed when you were in National Assembly as well. How did elections so quickly, become expensive?

Not only in government level, the issue was discussed in the party-level also. When I was the chief of Finance Division in the election of 2054 and 2056, I had proposed a campaign of Rs 10. However, it couldn’t become effective because leaders were accustomed to big money. If you can easily get huge money from a single source, who’d bother to go to each house and seek 10 rupees? However, the provision would have not only served to develop proximity among citizens, it also would have avoided reliance on single contractors.

Capitalists, in recent days, have been giving huge donations to parties and buying tickets. Even businessmen have been affiliated with parties and entered the parliament. Last year, Binod Chaudhary was in your party. This time, he’s entered Nepali Congress. Is it due to economic disagreement?

These things are happening against our will. No matter how much we talk about communism and socialism, it is limited to an ideology. If ideology and righteousness do not form a synergy when practiced, they become limited to speeches and books.  This is recurrent in all political parties. This will affect a country’s path to progress. It is important to manage the conflict between ideology and behavior. Even the 19th General Convention of Chinese Communist Party has said that the party would cease to function in case of conflict between ideology and behavior, and if the party fails, the country suffers. If such a prosperous country is abiding by the ideology, we must strictly enforce such values. If we can’t protect our values and beliefs, Nepal will be in grave danger. Parties must maintain economic transparency. It is difficult to enforce the Election Commission’s code of conduct. Leaders must do it themselves.

Contractors are present in every political party of the district. When the contractors become life systems of leaders, they will use the connection at the right time and enter into politics. Our leaders are being run by contractors. We have to stay away from this system.

These contractors play vital roles while recommending the name of the candidates at the local level and which is approved by the central level without any objection. This trend should be squashed from the politics.

Indian interest plays important role in Nepali politics. However, India is developing rapidly. But, in Nepal, it is not working. The gap between rich and poor is large in India. The rich are becoming richer and poor are poorer. We cannot deny similar situation in Nepal in future as well.

In democracy, everyone should get equal justice. But we cannot find it here. Since years back, those who are under justice, they are getting advantage from the state, for which the democracy might be at risk.

How many leaders have stayed away from the election for being expensive?

There are many who have stayed away from the elections. As I am one of the members of the standing committee, there have been bigger rumors. I know a dozen friends who have stayed away. There also are candidates who weren’t recommended by the district because they couldn’t afford. This is a common agenda for all political parties, and after the election, they must work together address the issue. If this is not done, political parties will become victims of capitalist.

Party office, vehicles, and chairs are also being sponsored?

Yes, this has been happening in a few places and risks are high. This is extremely wrong practice. If corrective measures aren’t taken on time, democracy won’t be alive.

There is a rumor that party unification among the leftists will come into effect before polls, when will be the unification?

First of all, the alliance was formed to bring political stability. To pave Nepal’s development, we are working to unify left parties. Following the unification, we are set to carry the country into modern socialism as per the constitution. This will prove new milestone in global history. After both the elections complete, we will start the process of forming large unified party.