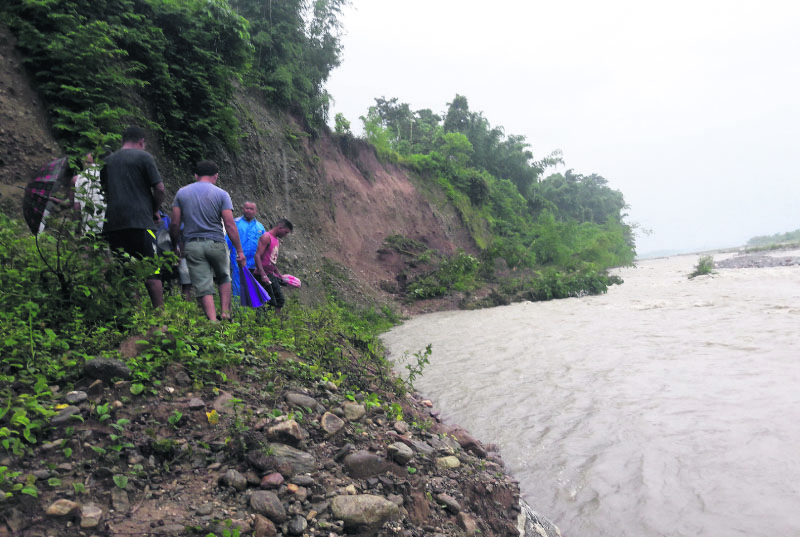 JHAPA, Aug 8: While prolonged dry spell instills fear of famine among farmers, excessive rainfall too has terrified many settlements in the district. Every monsoon, farmers have deep fear that the floods in rivers might sweep away their farms and houses. That very fear has been plaguing farmers of Jhapa district since the start of this monsoon.

Last week, paddy fields belonging to residents of Hokalbadi, Gaurigunj-1 were filled with lush of healthy paddy plants. On Monday evening the village started receiving torrential rainfall and subsided only on Tuesday morning. On Tuesday, most of the locals woke up to find that their farms and its yields have been wiped away by erosion caused by floods in nearby rivers. Following the disaster, the locals are now worried and scared that they might also lose their houses to the erosion.

Barriers and embankments constructed with sands and stones to prevent floodwaters from entering the village are sustaining damages every day. Some portion of the embankment has already been destroyed. “An important section of the embankment seems to be on the verge of collapse. I’m sure it will not last long,” said Sim Lal Rajbanshi of Gaurigunj-1. “If it gets destroyed, the whole village will be in grave danger.”

According to him, erosions have buried paddy fields of many farmers of Sabik Mahabhara areas. Dozens have lost their farms to the flooded rivers. “I myself suffered a heavy loss. There is not a trace of my 15 kattha of farms. The river has completely wiped our paddy yields,” added Rajbanshi.

Most of the farmlands have been inundated by floods. The water level has not receded yet. Farmers are waiting for it so that they can access whether paddy yield can still be saved. “But the hope is very slim,” he said. Farms of about two dozen farmers of a single ward have been affected.

The villages lying in the southern region of Jhapa and bordering with India, including Mahabhara, Korobari Gaurigunj, and Khajurgachi among others, are at the highest risk of floods and erosions and are deeply troubled. Kankai River, Kamal River, Ratuwa River and Kisney River have made them feel like they are waiting for the disaster to strike them.

Likewise, floods from those rivers have also fully inundated areas around the south of under-construction Kankai Bridge along the Hulaki Highway. Danger looms in the nearby settlements as well due to increase in the water level of rivers because of incessant rain.

“Hundreds of bighas of lands in these areas are being inundated by flood depositions and erosions. We expect more harm and damages as Kankai River has continually been hitting hard on the sand embankment that is vital for our safety,” said Kattik Kalan Rajbanshi, ward chairman of Gaurigunj-1. “Hundreds of households in Hokalbadi and other areas will be instantly displaced if the embankment gives in to the ferocity of Kankai River,” he added.

After the commencement of monsoon this year, paddy plantation has not progressed as expected due to excessive rainfall in the district. Monday’s rainfall was so severe that it triggered authorities to ring warnings to locals. According to the Mainachuli Rainfall Station, water level in the Kankai River had increased by 4.1 meters on Tuesday morning. Increment by more than four meters is considered dangerous.

Lok Raj Dhakal, president of the Jhapa chapter of Nepal Red Cross Society, said they have alerted the risky settlements by sounding alarm in those settlements after water level in Kankai River went above the safe level.

“Even at the moment, the process of erosion in farms by the river has not stopped. Erosion is taking place at a fast pace. If the water level in Kankai River keeps increasing at its present pace, there won’t be option other than to relocate families living in the southern region to safer areas,” he added. Dhakal further warned that more than half of the settlements of Shivashati Nagar are also at high risk of being displaced.

The fast pace of erosion along the river’s bank is also spreading fears among the locals of Bhadrapur, Mechinagar and Arjundhara Municipality. Since the start of the ongoing monsoon, many locals said they have been not able to sleep peacefully.

Paddy production is an important source of income for the farmers in the region. And locals of Mechinagar-15 are worried about their sustenance after losing their major source of income to the floods. “We have been waiting for the monsoon rains to come. Though our long wait is finally over, the same monsoon has deprived us of our farms,” said Hamendra Khawa, a local.

Land erosion due to river floods that occurs every year have been washing away around 5,000 hector of arable land in the Jhapa alone. Dozens of families have already been displaced, while many more are at great risk.

Landslides threaten many settlements across Pyuthan

PYUTHAN, Aug 9: Landslides are quite common in Pyuthan. Over the last two and half decades, they have claimed many human... Read More...

DUNAI (Dolpa), Aug 2: The risk of flooding has been a constant nagging problem for Dunai, the headquarters of Dolpa,... Read More...

COP-27: Achievement for Nepal
43 minutes ago