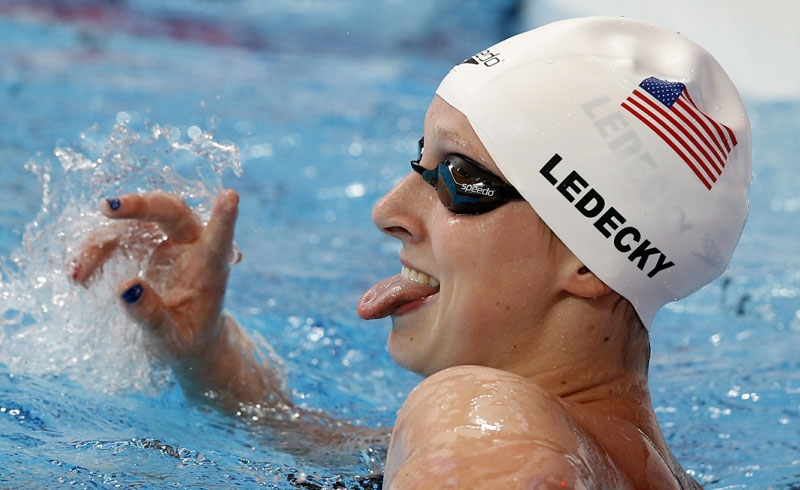 South Asian Games gold medalist in judo, Phupu Lhamu Khatri, will have the rare honor of carrying Nepal’s flag at the opening ceremony of Rio Olympics on August 5th. Khatri will be leading a 27-person Nepali delegation at the 31st Olympiad. The delegation includes two swimmers: Sirish Gurung and the young swimming sensation, Gaurika Singh. I mention swimming because for me the highlight of the Summer Olympics is always pool events: swimming and diving in particular.

Not that I swim. But it is something I hope to learn some day. Not only is it good exercise. I also find a certain degree of grace in the sport: the way human ingenuity has found a way to defy the natural inclination of the corporeal body to sink, to not just stay afloat but also travel great distances on raw strength of their arms.

I also love the way divers balance themselves on the edge of the diving platform, their bodies perfectly poised on nothing more than their toes, followed by their gravity-defying somersaults and the sleek entry into the calm water below.

When I was in school, there was a chapter in our Compulsory English on the legendary American swimmer Mark Spitz, a nine-time Olympics gold medalist. The chapter talked of how Spitz had managed to shatter many world records on his way to a then record seven gold medals at the 1972 Munich Olympics. This was way before I was even born. But reading of the superhero-like abilities of Spitz I used to wonder of how exciting it would have been to see him live.

Come the nineties, we used to have a black-and-white television set and an antenna on the roof that needed constant adjustments. “Ayo?” you asked from up there. “Ako chaina!” came the dismal reply from down in the room.  You then gave the antenna a vigorous twist. “Now?” you ask again. This daily duet was the staple of nearly every household in our Old Baneshwor neighborhood.  For back then we had to completely rely on satellite-fed images of Nepal Television and Doordarshan to carry Olympics footage into our homes.

Every night during the fortnight of the summer games, I would be riveted to the idiot box for the highlight package of the day’s events. I enjoyed the footage of all sports: weight-lifting, track and field, football, table tennis. But most of all I wanted to watch swimming and diving: the likes of Alexander Popov, Jenny Thompson, and Guo Jinging in action.

I remember I could not take my eyes of ace Chinese female divers like Guo Jinging and Fu Mingxia. They would always win. They had this surreal ability to pull off one after another perfect dive, expertly slicing the water upon their final entry, nary a ripple, as if it was a needle that had just entered the water, not a live human being.

I’m once again keenly looking forward to the water-events during the Rio Olympics that start on August 5th. Of course, these days, the events are a lot easier to track. There are plenty of private sports channel that among them cover almost all the Olympic events, live, unlike earlier times when Olympic aficionados like me had to make do with monochromatic NTV highlights.

This year I will greatly savor the exploits of Michael Phelps, Katie Ledecky and my favorite, Wu Minxia, the three-time reigning diving gold medalist from China.

But I must confess that with easy availability of live TV-feed and endless replays online, a bit of the old romance in watching Olympics, the games taking place halfway across the world, is gone. When I watched these expert athletes on our black-and-white TV, for briefest of spells, I could not help wondering about their personal and social backgrounds. In the pre-internet days, it was hard to get reliable information on even the most famous athletes in the world. Nor did we know much about countries like Kazakhstan and Romania except for their colorful flags displayed during the Olympic Games.

Also gone is eager anticipation for the country-wise medal tally at the end of the daily highlight package. Now, download the official Olympic app, and you will be instantly notified every time someone wins a medal in Rio. Sometimes this kind of instant communication makes you feel that the Olympics games are not happening in a far-away land but right next door.

Old habits die hard. The curiosity generated by those flickering black-and-white images all those years ago instilled in me a life-long love for sports. I will be travelling this fortnight, which will make it difficult to keep up with the events in Rio. The huge time difference between South Asia and South America won’t help either. But that does not mean I will spare any opportunity to flick open the television set, wherever I am, to check if there is a live pool event being beamed from Rio. I will also be closely following live Twitter feeds from Brazil.

The romance with Guo Jinging might be dead. The one with Katie Ledecky, the 19-year-old swimming phenom from DC, has barely started.

5 most recommended swimming pools to beat the heat

With the summer heat on the raise, people are beating the heat with relaxing at the pool with friends and... Read More...

Dreams of swimming to the Olympics

Starting young in competitive swimming, Subba learnt the hard way that everything is not rainbows and butterflies even after you’ve... Read More...

Labor Minister’s 100 days of work: Labor permit made paperless, homework on new employment destinations being done (with list)
15 hours ago