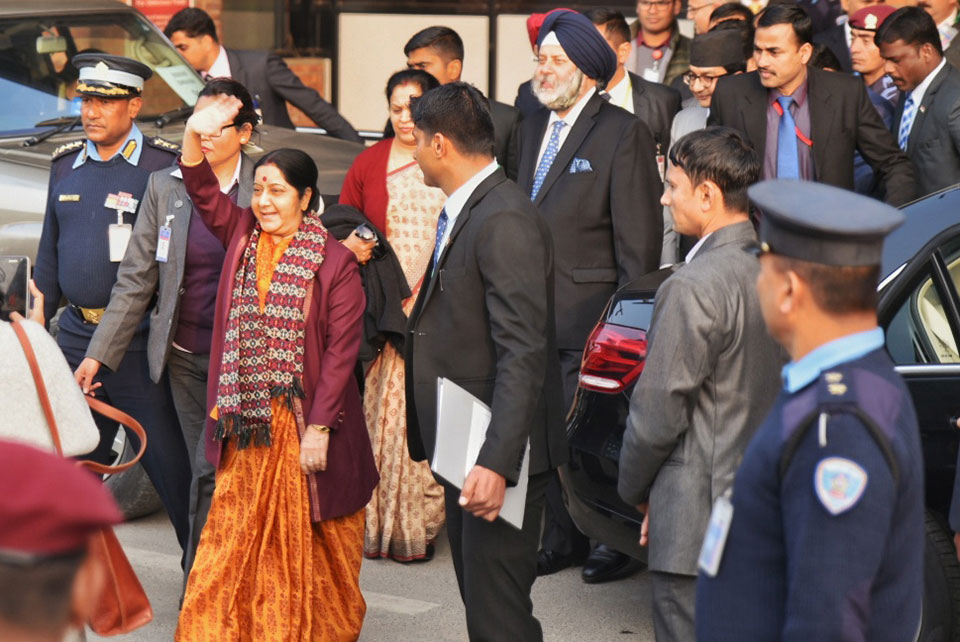 KATHMANDU, Feb 3: Although the Indian side has dubbed External Affairs Minister Sushma Swaraj's trip to Nepal  a goodwill visit in line with the tradition of  high-level political exchanges between the two neighbors, many political leaders in Nepal including former prime minister Baburam Bhattarai have termed the visit as “ill-timed.”

The political leaders have said that the visit by the Indian minister just ahead of the transfer of power from the care-taker government to a new government was inappropriate both politically and diplomatically as the timing allowed little space for meaningful talks.

Addressing a public function in his home district of Gorkha on Saturday, Bhattarai, who is coordinator of the Naya Shakti Party,  described the timing of the Swaraj visit as inappropriate.

“I have no objection to her visiting here. But I must say it would have been better had she visited Nepal after the formation of the new government,” said the Maoist-turned Naya Shakti Party leader.

Bhattarai said that the Swaraj visit just ahead of  new government formation and without any prior schedule has only fuelled unnecessary speculation and it wouldn't do any good for bilateral relations between the two countries.

He, however, stressed the need for strengthening  bilateral relations between Nepal and India.

UCPN (Maoist Center) Spokesperson Pampha Bhusal also termed the Swaraj visit as ill-timed. “As  I understand it, such high-level visits are unusual during a transitional phase as the timing leaves little space for meaningful talks and important agreements with the visiting leader. The visit should have happened after the formation of the new government,” said Bhusal.

“Generally speaking, the timing of Sushma Swaraj's current visit to Nepal is not according to normal practice politically and diplomatically. However, we welcome her and wish and try to make the visit fruitful. But I should again repeat, we must maintain our dignity and focus on the national interest,” he tweeted.

CPN-UML leader Rabindra Adhikari opined that bilateral relations between Nepal and India would strengthen only when the two countries work together and co-operate with each other in economic development.

“Relations among  countries today are based on the economy and business. If the hindrances seen in the export of agricultural and other products from Nepal to India are not eradicated, Nepal-India relations will be confined to talks only.” he tweeted. Adhikari's tweets come in the wake of the Indian side stopping the import Nepali ginger from the eastern part of Nepal for a few weeks. The export of ginger resumed just a day before the Swaraj visit.

There were similar reactions on social media by various political party  leaders  and commentators during the past couple of days. Many of them criticized the visit, alleging that the  ministry of foreign affairs was not consulted  in time and  ministry officials were not included during the meetings.

During her visit, Swaraj  had called on various political leaders and conveyed that India was ready to work with the government under any political configuration in Nepal, allaying apprehensions that India was making efforts to thwart the formation of a government of left political parties.

New Delhi has never in the past taken this kind of initiative just ahead of government formation, said a political commentator requesting anonymity.