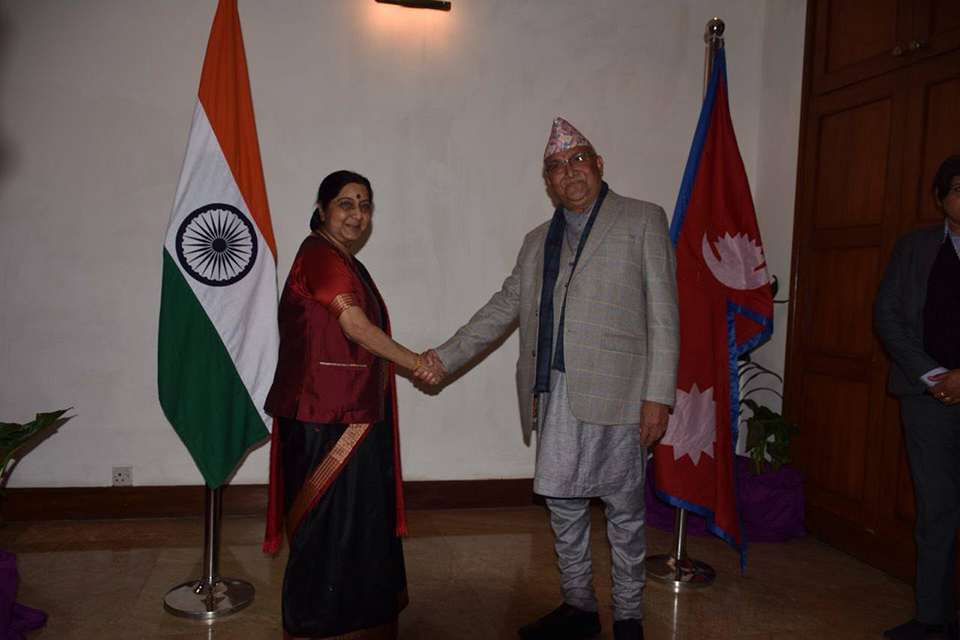 KATHMANDU, Feb 2: Visiting Indian External Affairs Minister Sushma Swaraj, who arrived in Kathmandu on a goodwill visit on Thursday, conveyed the message of Prime Minister Narendra Modi that he is eager to work closely with the CPN UML-led government.

During a one-on-one meeting with UML Chairman K P Sharma Oli and a group meeting held with senior UML leaders on Thursday evening, Minister Swaraj said that Prime Minister Modi was happy over the clear mandate received by the UML-led leftist alliance.

The minister also congratulated the UML for its resounding victory in the recently held parliamentary and provincial assembly polls, according to UML Secretary Pradip Gyawali, who was present at the meeting. She expressed hope that Nepal would see much-awaited political stability and be able to expedite development work under the new government.

Minister Swaraj also expressed satisfaction over the successful conclusion of the decade-long political transition after successfully holding elections in a peaceful and constitutional manner. “Chairman Oli conveyed that he was in favor of working closely with neighbors for peace and prosperity in the country. He also said that he wanted to take everybody along to achieve these ends,” Gyawali told media persons after the dinner meeting.

In her seventh visit here since assuming ministerial portfolio in May 2014, Minister Sushma Swaraj arrived in Kathmandu for a two-day goodwill visit. Talking to media persons upon arrival at Tribhuvan International Airport in the afternoon,  Swaraj said that she has arrived here to meet the leaders of various political parties, but without any specific agenda.

“I am delighted to visit Nepal, India's close friend. Our relationship is of such a nature that we do not need any excuse to visit each other. My visit to Nepal is to meet friends from all political parties and strengthen friendship,” she said.

Minister Swaraj is accompanied by newly-appointed Foreign Secretary Vijay Gokhale, Joint Secretary (North) Sudhakar Dalela and other senior officials of the External Affairs Ministry. She was received by State Minister for Finance Udaya SJB Rana at the airport.
Minister Swaraj went directly to Hotel Soaltee Crown Plaza, where she had a one-on-one meeting with CPN-UML Chairman K P Sharma Oli for over 45 minutes and a 45-minute  group meeting with senior UML leaders.

Minister Swaraj, who is staying at the Soaltee, held a group meeting with presidium members of the Rastriya Janata Party Nepal (RJPN) after the dinner reception.  She is scheduled to hold a meeting with  CPN (Maoist Center) Chairman Pushpa Kamal Dahal and call on Prime Minister Sher Bahadur Deuba and President Bidya Devi Bhandari before flying back home  Friday afternoon.

The visit of Minister Swaraj without any specific agenda this time is widely seen as New Delhi's overtures to improve its difficult relations with the CPN-UML, which is set to form the new government, and to reset ties between the two countries. Relations between Nepal and India reached a new low during the premiership of UML Chairman Oli following the promulgation of the new constitution.

Indian Prime Minister  Modi has already called the UML chief twice on the phone. In his recent phone conversation, Modi reportedly invited Oli to visit India at the latter's convenience. Oli also invited Modi to come to Nepal and visit the holy sites of Janakpur and Muktinath.

India reports daily rise in coronavirus cases of 343,144
40 minutes ago