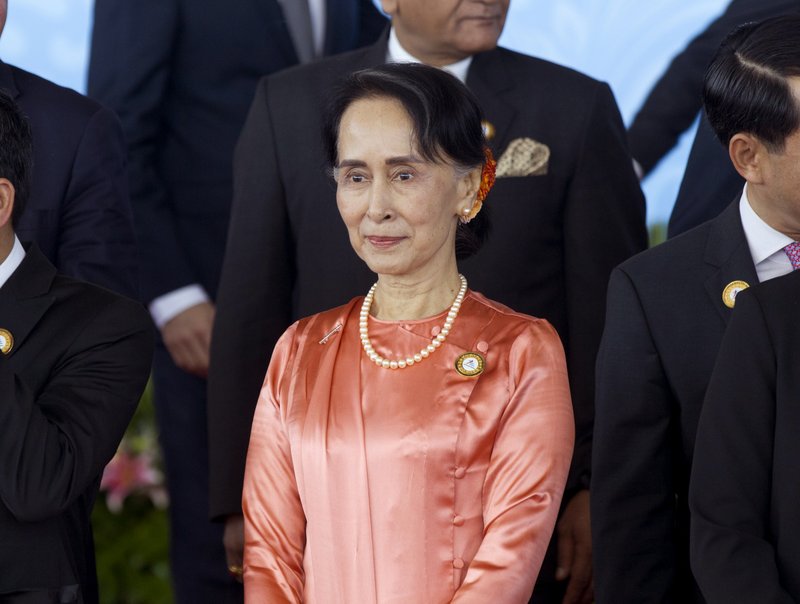 NAYPYITAW, Nov 20: Myanmar leader Aung San Suu Kyi said the world is facing instability and conflict in part because illegal immigration spreads terrorism in a speech Monday that comes as her country is accused of violently pushing out hundreds of thousands of unwanted Rohingya Muslims.

Suu Kyi did not directly mention the refugee exodus as she welcomed European and Asian foreign ministers to Naypyitaw, the capital of Myanmar. But her speech highlighted the views of many in Myanmar who see the Rohingya as illegal immigrants and blame the population for terrorist acts.

The ongoing Rohingya exodus is sure to be raised by the visitors at the meetings held Monday and Tuesday.

The world is in a new period of instability as conflicts around the world give rise to new threats and emergencies, Suu Kyi said, citing “Illegal immigration’s spread of terrorism and violent extremism, social disharmony and even the threat of nuclear war. Conflicts take away peace from societies, leaving behind underdevelopment and poverty, pushing peoples and even countries away from one another.”

Myanmar has been criticized for the military crackdown that has driven more than 620,000 Rohingya to flee Rakhine state into neighboring Bangladesh. The United Nations has said the crackdown appeared to be a campaign of ethnic cleansing, and some have called for re-imposing international sanctions that were lifted as Myanmar transitioned from military rule to elected government.

Foreign ministers and representatives of 51 countries are meeting in Naypyitaw in a forum that aims to further political and economic cooperation but takes place against the backdrop of the ongoing Rohingya refugee crisis.

A flurry of diplomatic activity preceded Monday’s opening, with the foreign ministers of Germany and Sweden joining the EU’s foreign policy chief in a visit to the teeming refugee camps in Bangladesh. China’s Wang Yi was also in Bangladesh and met privately with Suu Kyi on Sunday in Myanmar following that trip.

Suu Kyi is Myanmar’s foreign minister and state councilor, a title created for the country’s once-leading voice for democracy since she is constitutionally banned from the presidency. She does not command the military and cannot direct its operations in northern Rakhine state, but her remarks in seeming support of the brutal crackdown have damaged her global reputation.

In her speech to the visiting foreign ministers, Suu Kyi also cited natural disasters caused by climate change as compounding the world’s problems. She said mutual understanding of problems like terrorism would be crucial for peace and economic development.

“I believe that if policymakers develop a true understanding of each of those constraints and difficulties, the process of addressing global problems will become easier and more effective,” she said. “It is only through mutual understanding that strong bonds of partnership can be forged.”

The European Union’s top diplomat said earlier Monday that she is encouraging Suu Kyi to implement the recommendations of an expert panel on ensuring stability in Rakhine state and work was still needed on that.

The commission, led by former U.N. Secretary-General Kofi Annan, called for promoting investment and community-directed growth to alleviate poverty in Rakhine, which Myanmar officials have supported. But it also called for Myanmar to grant citizenship and ensure other rights to the Rohingya, which are hotly disputed and effectively render most of them stateless.

The commission, established last year at Suu Kyi’s behest, issued its report the day before a Rohingya insurgent group killed dozens of attacks on multiple police posts on Aug. 25. The military’s response has been called disproportionate and a textbook example of ethnic cleansing. Rohingya now in Bangladesh have described indiscriminate shootings, rapes and arsons that wiped out whole villages. Some survivors bear wounds from gunshots and landmines.

“Stopping the violence, stopping the flow of refugees and (guaranteeing) full humanitarian access to Rakhine state and safe, sustainable repatriation of the refugees are going to be needed,” said Federica Mogherini, the high representative for EU foreign policy.

She said the EU was encouraging Bangladesh and Myanmar to work on that issue.

BANGKOK, Sept 13: With Myanmar drawing condemnation for violence that has driven at least 370,000 Rohingya to flee the country, the... Read More...