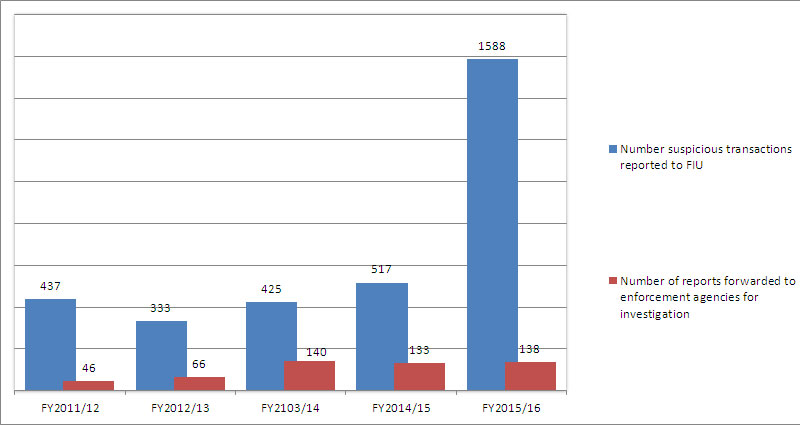 KATHMANDU, April 19: The number of suspicious transaction reports (STRs) by various bank and financial institutions, insurance companies and securities companies, among other entities that deals with cash transactions, more than tripled in the last fiscal year.

This indicating that more suspicious transactions or attempted transactions related to money laundering, terrorist financing or other illegal activities are coming under regulatory radar in recent years.

According to the annual report of the Financial Information Unit (FIU) under the Nepal Rastra Bank (NRB) for Fiscal Year 2015/16, the unit received altogether 1,588 reports of suspicious transactions in last fiscal year, up from 517 reports of similar nature of transactions in FY2014/15.

Data compiled by the FIU -- a financial intelligence unit under the central bank that acts independently in analyzing and disseminating financial information and intelligence on money laundering and terrorist financing activities to other enforcement agencies -- shows that the number of STRs are on a rise.

However, intelligence officials say that all these reports necessarily do not imply that these transactions are generated from money laundering or illegal activities.

According to the officials, these reports are first analyzed by the FIU and then disseminated to enforcement agencies like Department of Anti Money Laundering, Nepal Police, Department of Revenue Investigation and foreign FIUs for investigation and prosecution if the unit’s analysis concludes that such reports have a reasonable grounds to suspect that the money or asset is generated from money laundering, terrorist financing or other illegal means.

The unit forwarded 138 reports out of the total suspected transactions to various domestic enforcement agencies in the last fiscal year. While the number of possible money laundering cases is very low compared to STRs received by the FIU, data collected over the past few years shows that the intelligence officials have been finding more cases where financial system has been abused for money laundering and other illicit transactions.

All  BFIs,  money -changers   and   remitters, cooperatives,  insurance  companies, and securities  business  persons, and  Designated Non Financial Business and Professions  like dealers  of  precious  stones  and  metals,  casinos,  independent  accountants  and  legal professional,  notary public, trust and company service providers,  designated government agencies such as the Office of the Company Registrar, Land Revenue Offices and Department of Customs, among others, are legally obliged to report suspicious transactions to the FIU.

KATHMANDU, Feb 28: The number of suspicious transaction reporting (STR) by financial and other reporting institutions has declined significantly in the... Read More...

BFIs should be more vigilant: NBA

KATHMANDU, Aug 18: Bankers have said that bank and financial institutions (BFIs) should be more vigilant as banking industry has... Read More...