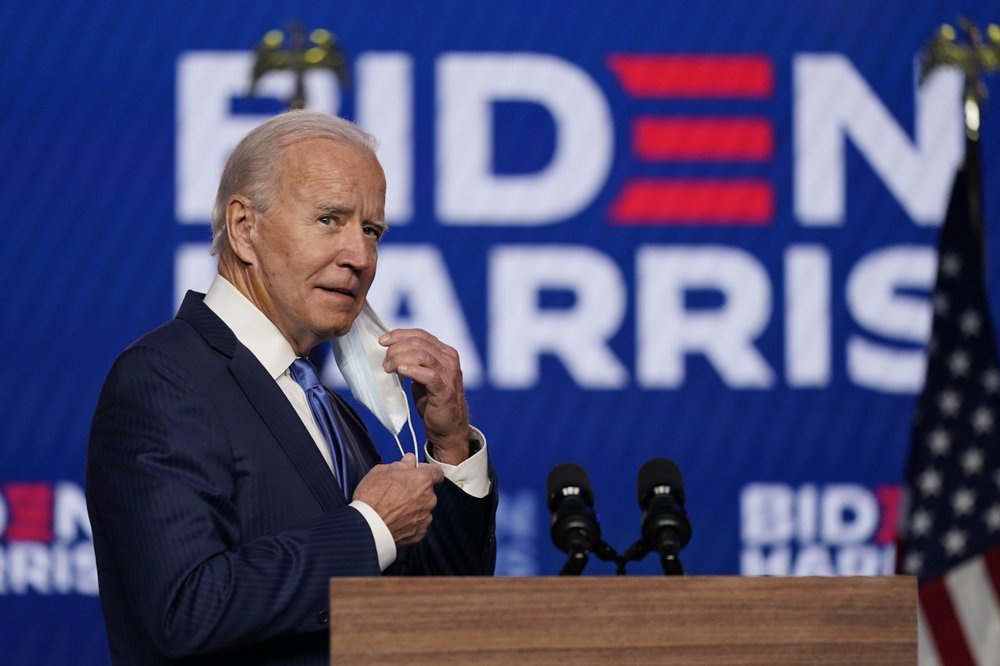 The verdict delay can be attributed to high turnout, a massive number of mail-in ballots and slim margins between the two candidates. But Biden held leads in Pennsylvania, Nevada and Georgia, putting him in an ever-stronger position to capture the 270 Electoral College votes needed to take the White House.

There was intense focus on Pennsylvania, where Biden led Trump by more than 27,000 votes, and Nevada, where the Democrat led by about 22,000. The prolonged wait added to the anxiety of a nation facing historic challenges, including the surging pandemic and deep political polarization.

Biden addressed the nation Friday night near his home in Wilmington, Delaware, and acknowledged the sluggish pace of the count “can be numbing.” But he added: “Never forget the tallies aren’t just numbers: they represent votes and voters.”

He expressed confidence that victory ultimately would be his, saying, “The numbers tell us a clear and convincing story: We’re going to win this race.”

Standing alongside his running mate, Sen. Kamala Harris, and against a backdrop of flags, Biden wasn’t able to give the acceptance speech his aides had hoped. But he hit notes of unity, seemingly aimed at cooling the temperature of a heated, divided nation.

Trump stayed in the White House and out of sight as the results gradually expanded Biden’s lead in must-win Pennsylvania. In the West Wing, televisions had remained tuned to the news amid trappings of normalcy on Friday, as reporters lined up for coronavirus tests and outdoor crews worked on the North Lawn on a mild, muggy fall day.

Trump’s campaign was mostly quiet -- a dramatic difference from earlier in the week, when officials vocally projected confidence and held a flurry of press conferences announcing litigation in key states. But his inner circle was touched once again by the coronavirus pandemic.

White House chief of staff Mark Meadows contracted the virus, according to two senior White House officials who spoke on condition of anonymity because they were not authorized to publicly discuss private matters. Several other members of the White House staff and Trump’s campaign team also tested positive.

Trump’s handling of the pandemic has been the defining issue of the campaign. The president, first lady Melania Trump and several other people in Trump’s orbit have fallen ill.

A handful of states remained in play — Georgia and North Carolina still too early to call along with Pennsylvania and Nevada. In all four states the margins between Trump and Biden were too narrow and the number of ballots left to be counted too great for the AP to declare a victor.

The uncertainty left Americans across the nation glued to their TVs and smartphones, checking for updates to a vote count that, for many, appeared to inch along.

The delays — and the reasons — varied from state to state. In Pennsylvania, officials were not allowed to begin processing mail-in ballots until Election Day under state law. In Nevada, there were a number of provisional ballots cast by voters who registered on Election Day, and officials had to verify their eligibility. And recounts could be triggered in both Pennsylvania and Georgia.

With his pathway to reelection appearing to greatly narrow, Trump was testing how far he could go in using the trappings of presidential power to undermine confidence in the vote.

He took to Twitter late Friday to pledge further legal action, tweeting that “Joe Biden should not wrongfully claim the office of the President. I could make that claim also. Legal proceedings are just now beginning!”

Trump did claim that he won late on Election Night. He also tweeted that he had “such a big lead in all of these states late into election night, only to see the leads miraculously disappear as the days went by,” although it was well known that votes cast before Tuesday were still being legally counted.

The uncertainty carried a hint of danger in some places.

Pro-Trump protesters — some of them openly carrying rifles and handguns — rallied outside vote-tabulation centers in a few cities around the country Friday, responding to Trump’s groundless accusations that the Democrats were trying to steal the White House. Roughly 100 Trump supporters gathered for a third straight day in front of the elections center in Phoenix, where hundreds of workers were processing and counting ballots.

Maryland GOP Gov. Larry Hogan, a potential presidential hopeful who has often criticized Trump, said there “no defense” for Trump comments “undermining our Democratic process. America is counting the votes, and we must respect the results as we always have before.”

But others who are rumored to be considering a White House run of their own in four years aligned themselves with the incumbent, including Sen. Josh Hawley, R-Mo., who tweeted support for Trump’s claims, writing that “If last 24 hours have made anything clear, it’s that we need new election integrity laws NOW.”

Trump’s campaign has engaged in a flurry of legal activity across the battleground states.

On Friday evening, Supreme Court Justice Samuel Alito approved a GOP request ordering county boards to comply with Pennsylvania state guidance to keep the late ballots separate from those received before or on Election Day. However, Alito did not direct election officials to stop counting the ballots, as the Republicans had also sought.

But judges in Michigan, Georgia and Pennsylvania quickly swatted down other legal action. A federal judge who was asked to stop vote counts in Philadelphia instead forced the two sides to reach an agreement without an order over the number of observers allowed.

This year a record 103 million Americans voted early, opting to avoid waiting in long lines at polling locations during a pandemic. With counting still continuing in some states, Biden had already received more than 74 million votes, more than any presidential candidate before him. More than 236,000 Americans have died during the coronavirus pandemic, nearly 10 million have been infected and millions of jobs have been lost.

Biden pushes closer to victory in race for the White House

Biden rebuilding ‘blue wall’ in race for the White House

Why Biden is better than Trump for the economy

Joe Biden has a better chance than anyone of rebuilding the Democratic coalition and winning back the support of disaffected,... Read More...