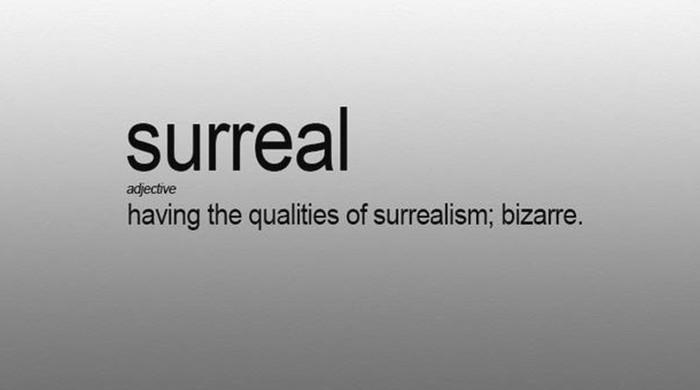 Surreal, meaning “marked by the intense irrational reality of a dream” was looked up so much by online users that Merriam-Webster on Monday dubbed it the 2016 word of the year.

Surreal joined the Oxford English Dictionary’s “post-truth” and Dictionary.com’s “xenophobia” as top words of the year.

“Our word of the year is one that people came back to over and over again in response to several events, and it gives us a look at 2016, according to what sent us to the dictionary,” Merriam-Webster editor-at-large Peter Sokolowski said in a video posted by the company on its website.

Merriam-Webster began tracking dictionary lookup trends in 1996, the same year the dictionary first landed online. The publisher said it ranks the word based on two criteria: a significant year-over-year increase in lookups online, and a high volume of lookups.

“Surreal” had its most significant spike this year following the U.S. presidential election in November, Sokolowski said. Searches for the word first surged after the Brussels attack in March and then again in July after the Bastille Day massacre in Nice, France and a coup attempt in Turkey.

The word was first defined in a Merriam-Webster dictionary in 1967 and derives from the Surrealism artistic movement of the early 1900s.

In recent history, “surreal” rose to the top of searches after the Sept. 11, 2001 attacks on New York and Washington, the Newtown shootings that left 26 children and educators at a Connecticut elementary school dead in 2012, the Boston Marathon bombings in 2013 and comedian Robin Williams’ suicide in 2014, according to Merriam-Webster.

Icon – The spike in lookups came after Prince’s death on April 21, when searchers were also looking up “surreal.”

Bigly – Looked up mostly during the U.S. presidential election after then Republican candidate Donald Trump, using “big league” as an adverb, made it sound like the word “bigly.”

Merriam-Webster’s complete list of notable 2016 words can be found at bit.ly/2gTOClO.

'Post-truth' declared word of the year by Oxford Dictionaries

LONDON, Nov 16:  Oxford Dictionaries chose "post-truth" as its word of the year on Wednesday, saying its use had spiked in... Read More...

BAJURA, April 29: Rajali, the part of Badimalika-3 in Bajura district (Province 7) is to be declared the zone free... Read More...

Village in far-west declared free of menstrual taboo and practise

JUMLA, Dec 11: A rural village in the far-western region has been declared free of a traditional practise related to... Read More...