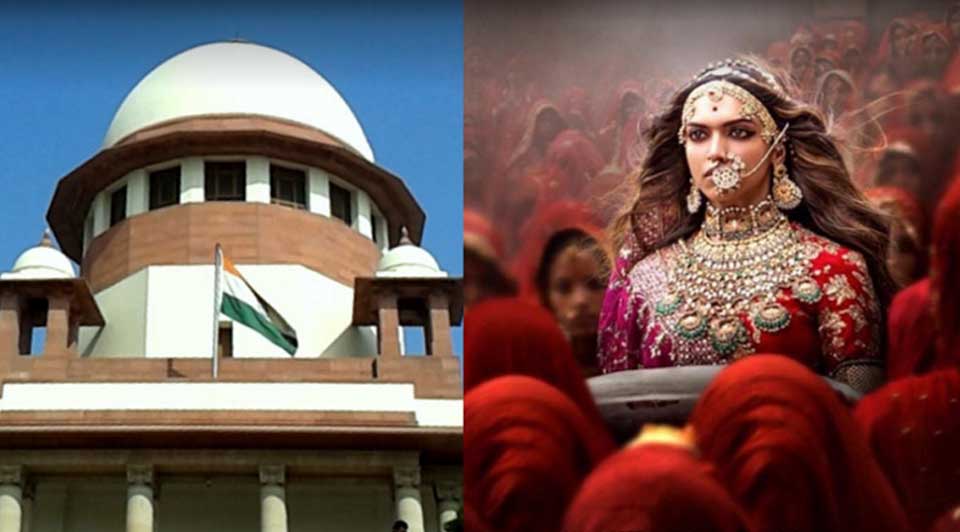 As Supreme Court cleared the path for the release of Padmaavat and stayed the ban on the film imposed by Gujarat, Rajasthan, Haryana and Madhya Pradesh, protests are already being reported from various parts of India.

New Delhi, Jan 18: The Supreme Court on Thursday stayed a ban on Sanjay Leela Bhansali’s Padmaavat imposed by four states, ensuring an all India release of the Sanjay Leela Bhansali film on January 25. The ban was imposed by Gujarat, Rajasthan, Haryana and Madhya Pradesh despite the film being cleared by the Central Board of Film Certification (CBFC). Despite the court order, protests against the film’s theatrical release continued in many states including Rajasthan and Chattisgarh.

A bench headed by Chief Justice Dipak Misra also restrained any other state from issuing such notifications and orders prohibiting exhibition of the movie. The bench, also comprising Justices AM Khanwilkar and DY Chandrachud observed that the states are obliged to maintain law and order.

“We direct that there shall be a stay of operation on the notification and orders issued and we also restrain other states from issuing such notifications or orders in this matter,” the bench said in its interim order.

Senior advocates Harish Salve and Mukul Rohatgi, representing Viacom 18 and other producers of the movie, told the bench that states have no power to issue such notifications banning exhibition of a film when the Central Board of Film Certification (CBFC) has given a certificate of release.

“If states are banning a film, then it is destroying federal structure. It is a serious matter. If somebody has a problem,then he or she can approach appellate tribunal for relief. State can’t touch the content of a film.”

“Request the Central government to pass a direction to the states for a better and an effective step and solution,” he added. The bench has posted the matter for further hearing in March.

The producers had approached the top court challenging the notification and orders issued by four states-- Gujarat Rajasthan, Haryana and Madhya Pradesh-- prohibiting exhibition of the film.

During the hearing today, Additional Solicitor General Tushar Mehta, who was representing Rajasthan, Gujarat and Haryana, informed the bench that notification and order has been issued by states of Gujarat and Rajasthan only.

Governments of Haryana, Gujarat, Madhya Pradesh and Rajasthan had declared that they will not allow screening of the movie. The producers submitted that the movie has undergone changes, including in its title, as suggested by the CBFC.

Asserting that the film has been cleared by the CBFC, the plea has said that the states cannot impose a blanket ban on a film and its screening can be suspended in a particular area or areas on account of threats to law and order, not across the states.

Commenting on Supreme Court judgment, Rajasthan Home Minister Gulab Chand Kataria said, “We got to know about the judgment through TV. We will get the court decision studied by the law department and further steps will be taken after that.”

He added that the state government will abide by court’s decision. “We respect the court’s decision. Everyone in the country abides by the Supreme Court.” However, women from the Jauhar Kshatriya Manch in Rajasthan have threatened to perform "jauhar" or mass self-immolation if the film is released.

"We have been protesting against the release of this film ever since we came to know of it. However, the government did not pay heed to our demands and decided to favour Sanjay Leela Bhansali. Hence, we have decided that some women will perform Jauhar on January 24. We are not afraid of death," the head of the committee told ANI.

In Chattisgarh, members of Rajput community submitted a memorandum to state Home Minister Ramsewak Paikra, demanding a ban on the film. They have even threatened to burn down cinema halls screening the film, reported ANI.

Originally titled Padmavati, the film’s name was changed to Padmaavat as suggested by the CBFC. The board recently cleared the film for release with U/A certificate and a set of five modifications. The movie has been facing violent protests by the fringe group, Shri Rajput Karni Sena who blame the director and lead actors of insulting Rajputs and the community’s honour. Protesters have issued death threats against Bhansali and Padukone while alleging that the queen is shown romancing Muslim emperor Alauddin Khilji in the movie – a charge the filmmakers have denied.

Slated to hit theatres on January 25, Padmaavat is now set for a box office clash with Akshay Kumar’s PadMan.