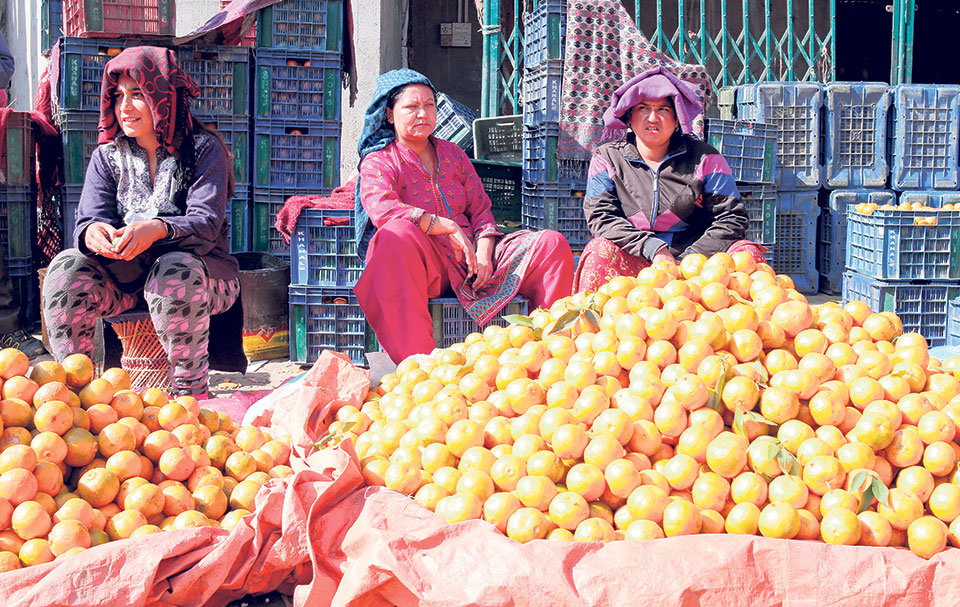 KATHMANDU, Nov 30: Supply of domestic oranges to the Kathmandu Valley has plunged by about a half this year compared to the last year, according to the statistics of Kalimati Fruits and Vegetables Market Development Board (KFVMDB).

The dramatic fall of supply of the seasonal fruit has come as a surprise for the traders in Kalimati, while the authorities have differing views about the reason for the dwindling supply.

Officials of the Ministry of Agricultural Development (MoAD) said that production has not declined, while authorities in Kalimati claimed that the supply has halved due to decrease in production.
Farmers of Gorkha told Republica production had gone down due to lack of irrigation, new pests, and poor quality of available fertilizers.

The supply from the pocket areas of orange like Gorkha, Tanahun, Lamjung, Syangja, Kaski, and Parbat has decreased. According to KFVMDB, only 300 tons of orange from these districts have entered the market while the supply was 660 tons until the end of November last year.

"The supply has dropped by more than 300 tons this year," said Binaya Shrestha, deputy director of KFVMDB. "Western districts supply orange in this early season of orange, but orange production has dropped there as the plants dried due to lack of rain during the budding period in April and May."

Orange traders in Kalimati said that decrease in cultivation area and lack of rain was the main reason behind the supply drop.

"Land suitable for orange cultivation has decreased and people are choosing other professions over orange farming, which has caused the production of orange to decrease for the last few years," said Sahadev Bharati, a fruits wholesaler in the market.

"It did not rain at the time of budding, which caused the buds to catch different diseases," said another wholesaler Yagya Bahadur Timalsina.

Orange farmers of Gorkha said that orange output has decreased, lamenting over the problems of irrigation and pests that caused the decrease in production.

"A large portion of the oranges fell in the field as the bushes dried since there was not enough rain. We don't have other option for irrigation," said Rishi Ale, an orange farmer from Sahid Lakhan Rural Municipality of Gorkha.

"Pests had attacked the bushes and the chemical fertilizers provided through the project also hampered the crop."

Ale further added that production has also decreased due to ageing of the orange bushes.
However, according to the MoAD, decrease in production in the pocket areas was not the reason behind drop in supply to Kathmandu valley.

"There is no considerable decrease in production as far as I know. The supply in Kathmandu has decreased due to local consumption," said Yogendra Kumar Karki, spokesperson for the MoAD. "Local consumption in pocket areas has increased due to increase in awareness about the importance of citrus fruits like orange."

"According to our records, the cultivation area has been increasing in Nepal," added Karki.
The peak season for orange, one of the most popular fruits in the country, is just about to start.

KATHMANDU, Aug 16: Vegetables supply to the Kalimati Vegetables Market, which had dropped after recent floods, is gradually improving. ... Read More...

KATHMANDU, Jan 11: Though a person needs 135 liter of water in a day, daily per capita water supply in Kathmandu... Read More...