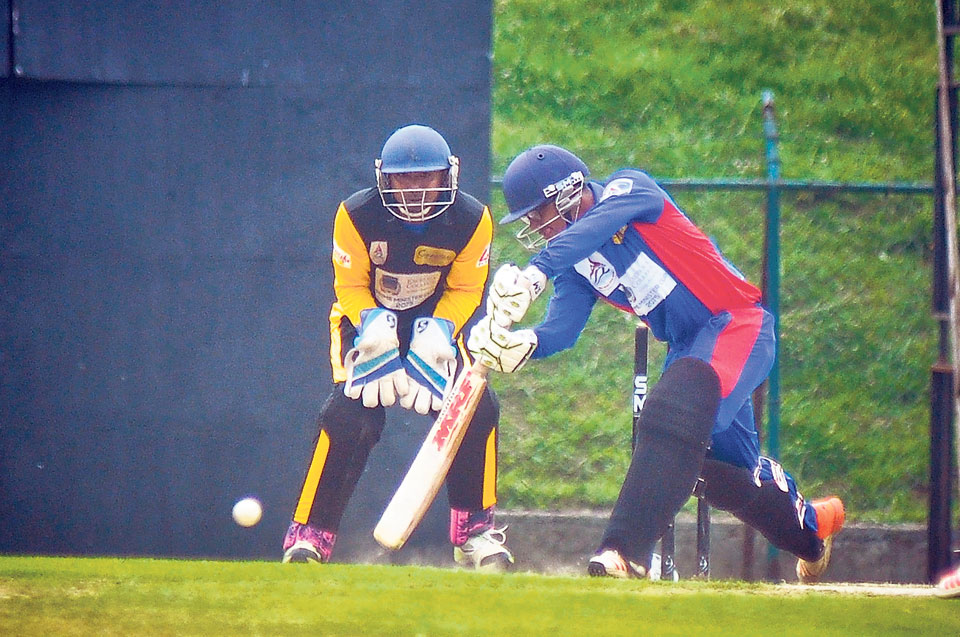 Bijay Gajmer/Republica Rabindra Jung Shahi of Province 6 bats against Province 3 during a match of the Inter-provincial Prime Minister Cup one day cricket tournament at the TU Cricket Ground in Kirtipur on Tuesday.

Against an unbeaten partnership of 56 runs between Rupesh Shrivastava (39) and Kishore Mahato (25), Chandra BC gave his career best six-wicket haul as Province 3 won the match in 36.3 overs chasing a target of 179 runs.

In the Group B match played at the TU Cricket Ground in Kirtipur, Province 6 won the toss and opted to bat first giving a target of 179 runs losing all its wickets in 47.4 overs.

Two Province 6 openers, Prakash Jaisi and Nischal Rawat were sent back to the pavilion earlier on in the game hitting nine and two runs respectively, and the score was 19-2 at the end of the seventh over.

Rabindra Shahi hit the joint-most 52 runs off 79 balls including five fours for the losing team, along with Diwan Pun who also scored 52 runs off 64 balls which included three boundaries. Likewise, Tek Salami, who came to the crease after the seventh over, scored 26 runs off 38 balls with four fours.

In reply, Province 3 started very poorly in the chase as the first three batsmen were out for single digits and the score was 10-3 at the end of the third over. But, Khan came to the crease and scored 31 runs off 46 balls with four boundaries, while he was supported by 20 off 37 including a six and two fours by Sanjay Basnet.

Despite losing the match, Province 6’s Chandra BC picked up six wickets, the most in the tournament so far, giving away 41 runs in the 10 overs he bowled. Likewise, Salami nicked a wicket for the team.

BC was also named the man-of-the-match.

In the other Group B match played on the same day at the Mulpani Cricket Ground, veteran off-spinner Sanjam Regmi starred with the ball bagging a five-wicket haul, and supported by left-arm spinner Samsad Sheikh’s four wickets helped Province 2 defeat Province 4 by 67 runs.

Province 2 won the toss and elected to bat first after being all out for 158 runs for the loss of all its wickets in 44.3 overs. In reply, Regmi and Sheikh’s brilliant bowling performance limited Province 4 to 91 runs all out in 28.5 overs.

Six players got to the double digit score with middle-order batsman Bishal Shusling scoring the highest 26 runs off 69 balls with a four.

Bipin Khatri took the most three wickets giving away 17 runs in the 10 overs he bowled for the losing team, along with another three-wicket haul from Hari Chauhan, who gave away 24 runs in 7.3 overs. Also, Amrit Gurung, Govinda Pradhan and Raju Gurung took a wicket each.

Only two players reached the double digits for Province 4 as Anil Gurung hit 36 runs off 69 balls including three boundaries, while Suman Ghimire scored 32 runs off 36 deliveries with four boundaries.  Regmi took five wickets giving away 16 runs in his spell of 10 overs, while Sheikh picked up four wickets at the expense of 20 runs in the 7.5 overs he bowled. Also, Mehboob Alam pocketed a wicket for the winning team.

Province 4 will play against Province 1 at Kirtipur, while Province 5 will face Province 7 at Mulpani on Wednesday.