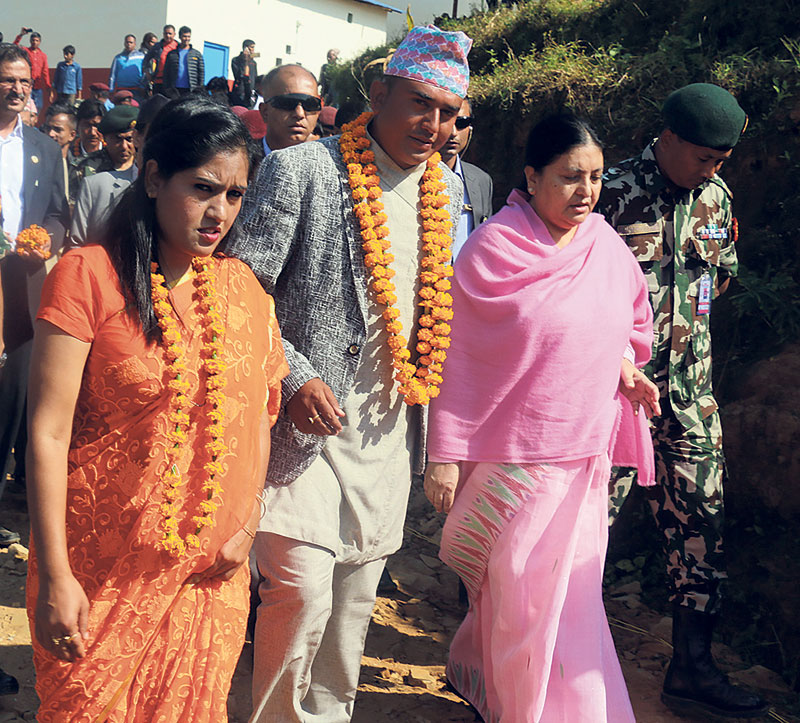 SINDHUPALCHOWK, Oct 28: They could not celebrate Tihar last year as they neither had a proper house to live in or enough food to eat. The devastating earthquake which had rendered them homeless, had robbed them also of hopes and excitement. But this year, it is different. This Tihar has brought home peace and prosperity and above all given them their dream home to live in.

After one and half year of the disaster, 66 families in Giranchaur have been finally able to move into their new residences. Dhurmus - Suntali Foundation, led by comedian duo Kunjana Ghimire (Suntali) and Sitaram Kattel (Dhurmus), had constructed the houses. The foundation handed over the keys to the families on the auspicious day of Kag Tihar (the first day of Tihar, devoted to crow).

The morning in Giranchaur settlement was spectacular. President Bidhya Devi Bhandari, who was there to hand over the houses to the families, was surrounded by them. The families were were beaming with happiness. “Men, women, children and elders, were overwhelmed realizing that they were finally going to get into their house,” said Ram Bahadur Tamang, president of Integrated-community Management Committee of Giranchaur.

“Since they lost their houses to the earthquake, they have gone through tremendous hardships. They shivered in the cold and got drenched during the rainy season inside their tents. But this Tihar their hardships come to an end as they illuminate their new house with lights and happiness.”

A concrete house with all basic facility is indeed a life changing experience for the victims. They are overwhelmed with the selfless service provided by Suntali and Dhurmus, Tamang noted. “This is the first time people saw this level of selfless task with their own eyes. Not only the houses are attractive, but also the management in the community is very apt, we all must be very grateful to Suntali and Dhurmus.”

In her speech, President Bhandari also did not spare any words to recognize the work the foundation had done. “Suntali and Dhurmus Foundation’s performance has challenged the government. It not only outdid the government but also proved that individual organizations can perform well better than the government.”

Bhandari, who had reached Sindhupalchowk in a helicopter, said that Giranchaur settlement is an example which should be replicated in other hilly parts of the country. “I had seen such integrated settlement only in Tarai, but after seeing this coming true here, I’m convinced that we could plan such settlements in other hilly regions as well,” she noted.

The victims had started moving in the new house as soon as Bhandari left for Kathmandu. They were carrying their belongings and moving into their colorful houses.

The settlement is spread in 35 ropanis of land. Five kilometers away from Jirikilo - Melamchi road block, the settlement is thrilling in terms of the scenic beauty and climatic conditions. It is environment friendly, earthquake and landslides resistant. It is powered by solar power. “You could move around, go in houses, in a wheelchair,” Tamang said boasting about the settlements friendliness to people with disabilities.

Elaborating further, he said that the community could be self reliant in economic terms as well. “It can be great attraction for home stay and organic farming, among others. Due to its natural beauty, this community can attract tourists within a short span of time,” he said adding that “we have worked out guidelines in this direction and look forward to ensure that the community becomes self sufficient economically also.”
Giranchaur, a Tamang settlement, was completely destroyed by the earthquake. The very community members have been the recipients of the new houses. Kattel and Ghimire launched initiative to construct a new settlement for them four months back.

According to Kattel, Rs 50.14 million have been invested for constructing the settlement. Over 5000 donors from in and outside the country contributed to the funds. “We have already paid over Rs 40 million of the total cost and look forward for collecting the remainder,” he said.

The foundation had plans to hand over the new houses to the victims during Dashain festival. However, the plan could not materialize. The duo had set up a similar settlement in Kavre also, soon after the earthquake.

Name, capital of Province 2 to be decided through voting
33 minutes ago

Govt not in favor of a complete shutdown: Health Minister Khatiwada
46 minutes ago