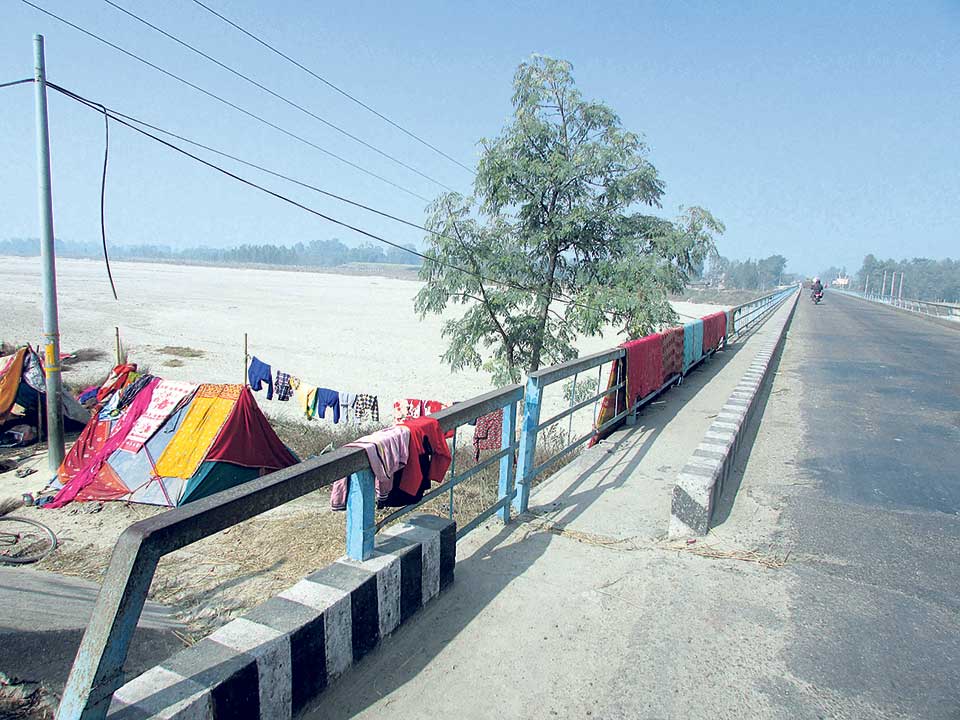 Clothes are seen drying on a bridge in Sarlahi on Tuesday in Sarlahi district.

SARLAHI, Jan 10: Dipping temperature had affected normal life of people across Madhes for the last few days. It had forced them to stay indoors in morning and evening and even during the day, mobility of the public was not as dense as it would otherwise. However, on Monday, they heaved a sigh of relief as the sun was relatively warmer and lasted throughout the day.

“I had not been able to step out of the home due to extreme cold. I even feared getting cold related flu. But today, the god was merciful,” said Ashok Thapa of Hariban. “The warm sun eased elderly people’s life the most. Cold had hit them the most.”

Most parts of the Madhes remained sunny on Monday and Tuesday and this encouraged people to come out of their houses. Most of them even took out their cattle for grazing in the fields after many days.

“The increasing cold had totally disturbed our life. Even the clothes that I had washed four days ago are yet to get dry,” said Puspalata Shrestha of Nawalpur. “But yesterday and today, it felt like everything is normal. It’s warm now due to clear sky and the sun.”

As the weather became warmer, Shrestha said that she was able to move around the house and perform cleaning chores. “Yesterday, it was warm and today it was even better. Therefore, today I finished all the pending household chores. I was able to dry blankets and children’s clothes in the open,” she reported joyfully.

DSP Rajesh Thapa, acting chief of Sarlahi Police Office was elated too. Cold had given hard time to police as well, he said. “Now, we are also feeling much better. It’s easier to do duty when whether is not much harsh,” he stated.

MELAMCHI, Dec 9: With the winter nearing its peak, the survivors of the Gorkha Earthquake in Melamchi of Sindhupalchowk are... Read More...

Nepal extends international flights suspension until May 31
23 hours ago

Only 25% of banks' branches to be opened
9 hours ago

Bodies float down Ganges as nearly 4,000 more die of COVID in India
10 hours ago

35 killed in Gaza, 3 in Israel, as violence escalates
12 hours ago