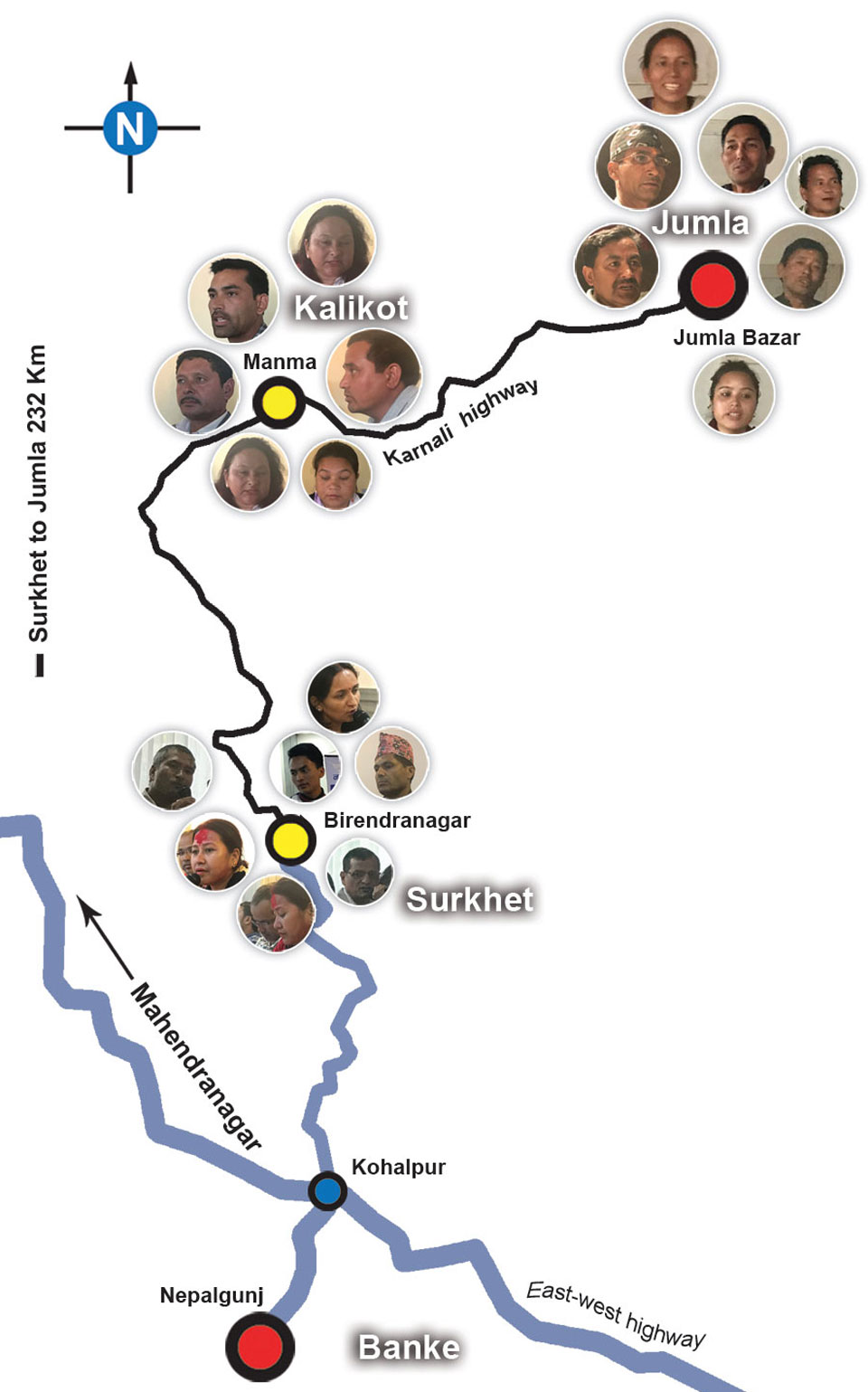 KATHMANDU, June 13: "We used to spend four days inside a bus traveling from Jumla to Nepalgunj," said a group of young people from Jumla during a recent conversation  we had in Jumla Bazar. This was the state of things  before the Karnali Highway was completed.

"We can now sell our famous Jumli marsi rice and beans in Kathmandu," said a middle-aged man.

After decades of promises by politicians, the 232 kilometer-long Karnali Highway (from Surkhet to Jumla) was completed in 2007 and blacktopped in 2015. This has opened up a sense of possibilities for the 1.2 million people living in Province Six. Far-off districts like Surkhet, Dolpa, Humla and Mugu can now hope for life that is a little easier and more accessible.

Jumla's Chandannath Municipality made headlines recently when it  elected women as  mayor and deputy mayor, the only place to do so in the country so far. Deputy mayor Apsara Neupane says her top priority is to clean up the city and explore its potentials. Chandannath temple was also in the  news a few months back, though for all the wrong reasons. A dozen of its centuries old idols were stolen and only one of them has been recovered so far. The locals are waiting eagerly for the police  to bring  back the stolen deity and bring the culprits to justice.

'Missing' anthropologist  Dor Bahadur Bista once wrote of the Khas people of far west Nepal as "a group that fell through the cracks of history." To many Nepalis, Jumla is a far-off  place with no modern facilities. Many of us carry the impression of a "backward-people" with little access to the world and its happenings. One  local said that Jumla learnt of the dawn of democracy in Nepal in 1950 only a year later. But Jumla Bazar is now a vibrant city with reliable road connectivity and replete with modern amenities like electricity, good hotels, wifi, private schools and more.

Karnali Technical School and Karnali Academy of Health Sciences have been instrumental in producing skilled manpower for the region. "Almost 95 percent of our graduates are employed," said Raj Kumar Chaudhary, principal of the technical school. The school has so far graduated more than 3,000 individuals in agriculture, construction and health work.

Similar is the story of Karnali Academy of Health Sciences, which was set up in 2007. Karnali Academy hopes to start a MBBS program in near future and is building  a 100-bed hospital. An ailment that used to cost more than Rs 200,000 to treat in Nepalgunj and Kathmandu can be treated for less than Rs 20,000 at the Karnali Academy. This has been a huge relief for  Karnaliites.

Kalikot is one of the poorest of the 75 districts, according to a 2014 National Planning Commission  report. It ranks 72 (0.432) in the HDI, which measures development status. Many locals still struggle to feed their families. They now have high expectations of their newly elected representatives. The notion of bringing Singha Durbar to their doorsteps has excited the people. They feel they can finally be  masters of their own destiny. Such exuberance and excitement are palpable in Kalikot district headquarters, Manma.

Kalikot's Sunthala airport has remained closed for the last 32 years. And many feel this is due to poor knowledge of the place among the planners in Singha Durbar. "The cost of building a similar capacity hydro project is different in Saptari and Kalikot . We need people from the region at the planning level," said Harsha Bahadur Bam.

"We have waited for 20 years  and now Kalikot will move forward," said Dabal Bogati, a newly elected ward chairperson. He feels the place is ready to take on the challenges of the new times and move forward. Another newly elected war member says  Kalikot has to work hard to make the best use of the powers newly delegated  to the local level.

"We need to focus on changing our mindset from the buyers of rice to exporters of goods," says Bijaya Bista, newly elected deputy mayor of  Khadachaur Municipality in Kalikot. She wants to focus on bringing on board the women, Dalits and other groups that have been left behind for so long.

Kalikotes say they are sleeping with their heads on "golden pillows." Various estimates put the viable hydropower capacity of Kalikot at around 21,000 MW. But thousands of locals are forced to go and work on farms in "Kalapahad",  their name for India. The savings they return with is what  feeds their families, while they talk about the immense potential of their district.

It is in places like Jumla and Kalikot that people's hopes and excitement meet the hard truth. Chandannath Municipality has been allocated Rs 270 million for the fiscal year. But after deducting the salaries of teachers and other government staff, a mere 20 million will be left for  spending on development work. The municipality has extremely limited avenues for generating its own income. It will be a while before most  of the village councils and municipalities realise significant  enough income to support their developmental aspirations.

People have lofty dreams out there, from setting up a world-class high altitude training centre to establishing universities and running a research center to unearth  the mysteries behind the origins  of the Nepali language in Sinja Valley. These aspirations are often stymied by a dearth of resources and  manpower and lack of willingness on the part of  the people and  agencies concerned at different levels of  government to move forward on the issues facing the country since  ages.

The local election in Province Six has sprouted hope. While the mayors and village council chairpersons wait for Kathmandu to send them the details of their work responsibilities and the needed support, the people feel it's their turn to be masters of their destiny. While Jumlis, Kalikotes and Surkhetis complain about Kathmandu's persistent negligent, they also seem to accept the new challenge of building their villages and cities on their own with excitement and a little uncertainty.

Security agencies on the alert for possible clashes

KATHMANDU, Dec 3: Keeping in view of the growing grievances of the public over the constitution amendment bill that might spur... Read More...