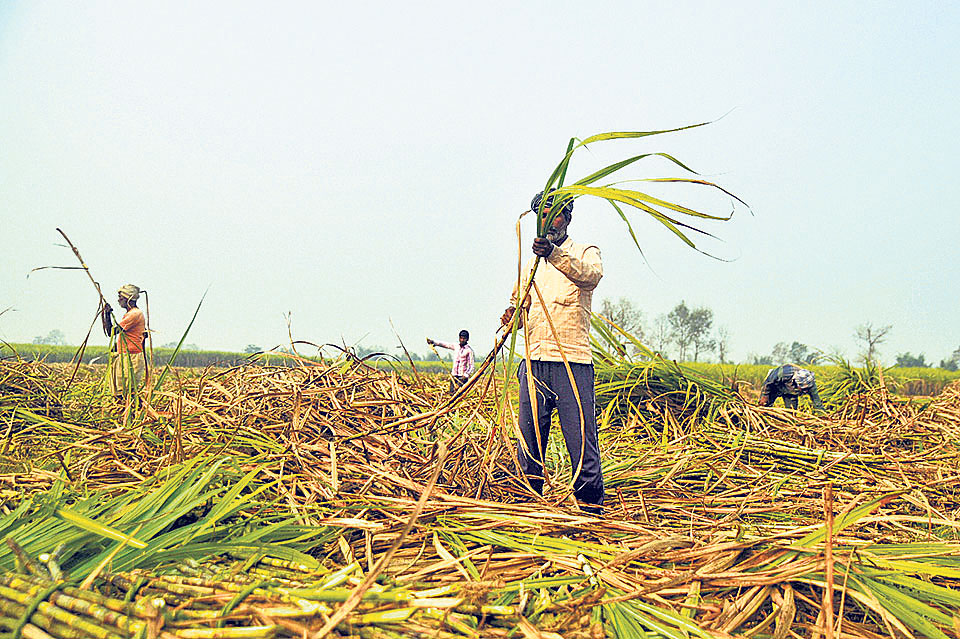 MAHOTTARI, Dec 22: Hiralal Mahato of Bhangaha Municipality-4 in Mahottari district, who used to cultivate sugarcane in three bighas of land, has grown the cash crop only in one bigha of land.

Similarly, Dhaneshi Mahato of the same locality has already switched to another occupation.

Sugarcane which would be cultivated in hundreds of bighas of land has now been limited to some patches in the district. Sugarcane farmers have started quitting their occupation after they faced many problems including payment despite their hard work and huge investment.

Chairperson of Sugarcane Producing Farmers' Association, Mahottari, Naresh Singh Kushwaha said the lack of technical support in preparation of sugarcane farming and concessional loan for its cultivation, obstacles in fixing price and nonpayment are some of the pressing reasons behind quitting sugarcane farming.

Sugarcane, which is a major cash crop, would be cultivated in around 18,000 bighas of land in the district 20 years back but now, it has been reduced to 6,500 bighas of land, added Kushwaha.

Hiralal said, "Sugarcane, which is sweet in taste, is bitter for us. Neither the price of sugarcane is determined nor the payment is made on time. So we have been decreasing its cultivation."

The farmers further said they expect the government to determine an appropriate price of their produce.

Meanwhile, Everest Sugar and Chemical Industries at Gaushala Municipality-1 has started sending approval letters to the farmers for harvesting sugarcane.

The farmers have demanded that the price of sugarcane be determined at Rs 617 per quintal this year. It was Rs 536.56 per quintal last year.

Another sugarcane farmer Kusheshwor Yadav of Bhangaha-4, however, said that there was the possibility of returning to their occupation again if the government created a trustworthy environment for the same.

However, the owners of sugar mills said that they were marred by the farmers and the industry ministry in the name of determining sugarcane price every year. Executive operator of Everest Sugar and Chemical Industries in Mahottari, Suresh Kumar Sarraf said their production had to be stored in go-downs after the government did not stop the import of sugar.

MAHOTTARI, Jan 5 : Farmers in the district have waning interest in cultivating sugarcane owing to hassles they faced with... Read More...

Cabinet will get full shape today: Dahal
10 hours ago
Afghanistan and the United Nations
16 hours ago

UNICEF: Young children’s diets showed no improvement in last decade, ‘could get much worse’ under COVID-19
6 hours ago