Sugarcane farmers in dire straits ahead of festive season 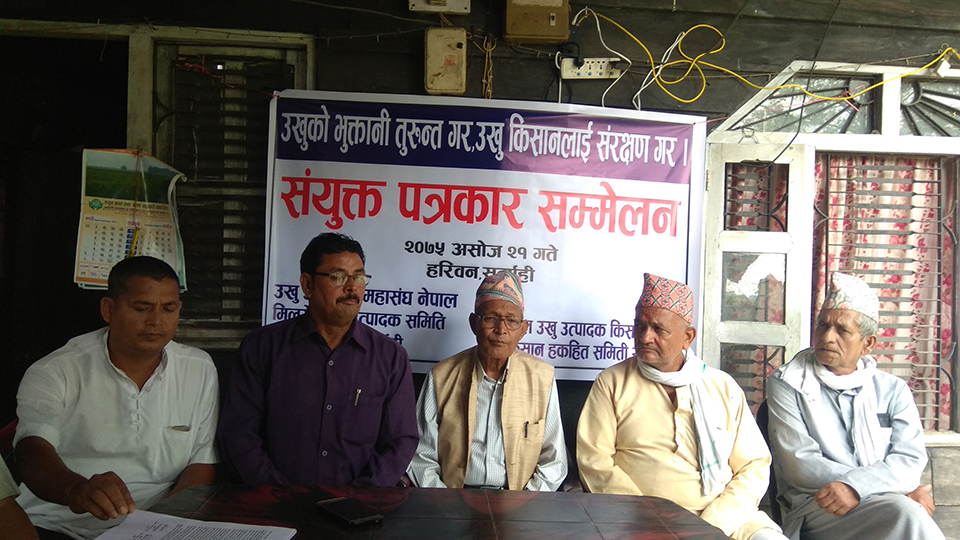 Tanka Chhetri/Republica Representatives of sugarcane farmers at a press meet organized at Hariwan of Sarlahi on Sunday.

SARLAHI, Oct 8: The delay in release of payments by sugar mills have left sugarcane farmers in most of the Tarai districts in dire straits ahead of Dashain, Tihar and Chhath festivals.

Speaking at a press meet in Hariwan of Sarlahi on Sunday, farmers said they are still to receive over Rs 3.28 billion in outstanding payments from sugar mills as well as government subsidy. "It's a double whammy for us. While mill operators are delaying our payment in one pretext or the other, the government is also not releasing subsidies that it has announced," Kapil Muni Mainali, president of Sugarcane Producers Federation Nepal. "Farmers are left to starve ahead of the festive season."

"We may receive bullets, but we will intensify our protest now," he said. "Farmers are already saddled with debt. As there is no certainty of mills releasing payment anytime soon, there is nobody farmers can turn to," Mainali added.

Mainali warned that farmers will halt vehicular movement along East-West Highway if the government failed to release subsidy of Rs 65.28 per quintal before Dashain festival.

"We, however, have not received any such subsidy so far," he added.

Twelve sugar mills across the country had crushed 20.6 million quintals of sugarcane in the previous season.

Speaking on the occasion, Raj Kumar Upreti, president of Nepal Sugarcane Producing Farmers, said representatives of farmers have held talks with finance minister, agriculture minister, industry minister and even the Prime Minister. "Still we are not getting justice," he said, adding, "It seems that the government is favoring industries by sidelining our demand," he added.

Sugarcane farmers also said that if the situation persists further, many farmers will give up farming.

Sugar mills have been maintaining that they have not been able to pay farmers as their production is lying unsold at their warehouse while cheaper imported sugar floods market.

Meanwhile, the government has formed a seven-member task force for the protection of consumers, sugarcane farmers, and sugar mill.

The task force is led by a member of the National Planning Commission Dil Bahadur Gurung. Other members in the taskforce include representatives of sugarcane farmers, sugar producers, consumers' group, and joint secretaries from finance, and industry ministries, according to government's spokesperson Gokul Baskota.

Sugar imports have now come to a halt after traders used up the import quota of 100,000 tons three weeks ago. This has caused price of sugar to spike in the market.

Though the Public Accounts Committee of parliament has asked the government to fix minimum retail price of sugar, the government has been dragging its feet on the matter.

KATHMANDU, Aug 25: President Bidya Devi Bhandari has extended her best wishes to all Nepali sisters and brothers in the... Read More...