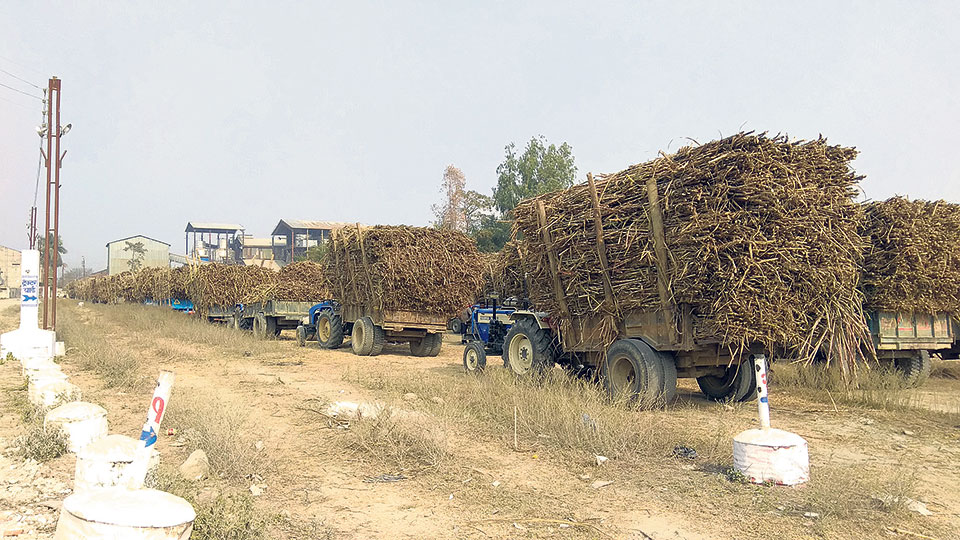 Vehicles loaded with sugarcane are seen on the premises of Indu Shankar Sugar Mill in Sarlahi. Photo: Tanka Chhetri/ Republica

“We started crushing sugar at 2pm Tuesday. Now we are operating the mill in full capacity,” Thakur Nepal, administrative officer of the mill, told Republica. The mill had informed farmers five days ago to bring sugarcane for crushing.

The industry has a target of crushing around four million quintals of sugarcane this season, according to Yog Narayan Rajak, manager of the mill.

The mill had crushed around 3.9 million quintals of sugarcane last year.

With the sugar mill restarting operation, farmers are in hurry to harvest sugarcane as the government’s price decision came late this season.

“This year, the government was late in taking decision on sugarcane price. This has bothered farmers and they are in a hurry to harvest their product,” said Kapil Muni Mainali, president of Nepal Sugarcane Producers Federation.

The government’s decision on sugarcane price was delayed by one and half months this year compared to the previous years, according to Mainali.

However the other sugar mill of the district, Annapurna Sugar Mill based at Dhankaul, is yet to start crushing sugarcane. Officials of the mill have said that it might take some time. This delay has bothered farmers of Dhangadha area.

“The mill has said that it will take 10 to 15 days more to start crushing sugarcane. We are worried about our next crop which we plant only after cutting down the sugarcane plants,” said Laxman Roy, a farmer.

This year, sugarcane was cultivated in around 26,000 hectares of land in the district. Sarlahi is the major sugarcane producing district in the country.

SARLAHI, March 6: Sugarcane farmers in the district are agitated as the government has failed to provide them the promised subsidy,... Read More...

Sugarcane farmers in dire straits ahead of festive season

SARLAHI, Oct 8: The delay in release of payments by sugar mills have left sugarcane farmers in most of the Tarai... Read More...