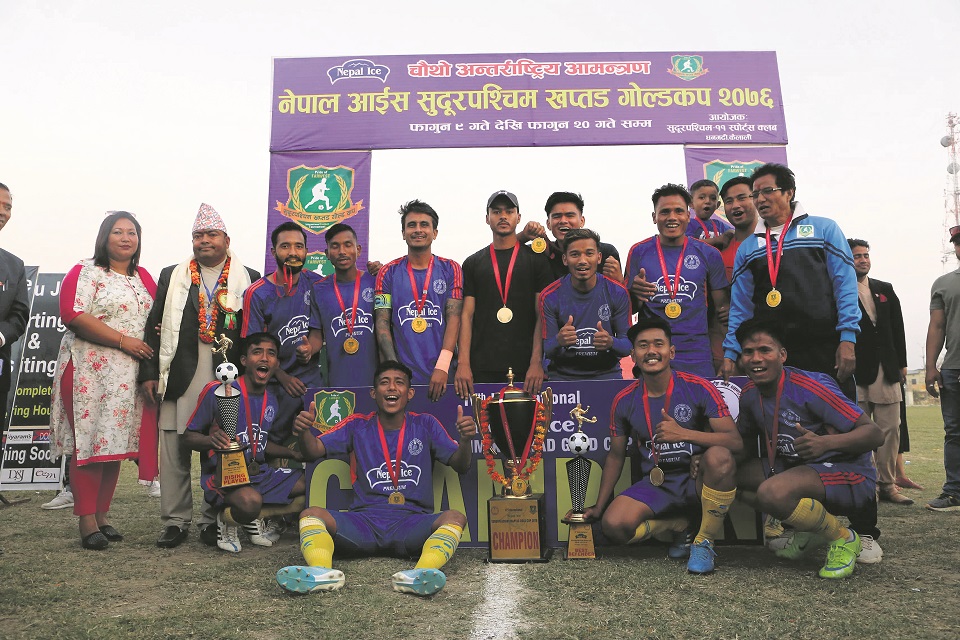 Members of Sudur Paschim XI pose with the trophy after defeating Three Star Club to win their first Khaptad Gold Cup title at the Dhangadhi Stadium in Dhangadhi on Tuesday.

At Dhangadhi Stadium, the in-form striker Bikram Singh Thakuri continued his goal scoring spree to hand SudurPaschim its first ever Khaptad Gold Cup title.  Thakuri took advantage of lapse in concentration of Three Star defenders. A free-kick taken by SudurPaschim was cleared by Ananta Tamang, providing a back-pass to Ashok Khawas. However, Thakuri lashed onto the opportunity, intercepted the pass and sent one through the Three Star goal in the 28th minute to give SudurPaschim the decisive goal.

The experience of a tough semifinal match against APF and executing the prepared tactics against Three Star helped the team win its first trophy, said Rohit Bhandari, the head coach of the winning team SudurPaschim.

“We executed the same tactic against Kanchanjunga FC in the quarterfinal and APF in the semifinal which worked in the final as well.”

“We got the lead in all three matches and the defenders, and midfielders did fantastic job to secure the lead. We had utmost belief in Bikram’s (Singh Thakuri) capabilities and he proved his worth time and again,” added Bhandari. Thakuri won the most valuable player of the tournament award on route to win a motorbike. Thakuri was instrumental in SudurPaschim’s dominance in the league scoring in important semifinal and final matches. Similarly, he also bagged the best forward award for scoring five goals.

Three Star’s Puran Chemjong was declared the best goalkeeper of the tournament while his teammate Sushil Rai and Sudur Paschim’s Dhan Bahadur Thapa won the best midfielder and defender awards respectively. SudurPaschim swept most of the awards as Bishnu Chaudhary was recognized with emerging player of the tournament. Rohit Bhandari was adjudged the best coach for a title-winning campaign with SudurPaschim.

The winner of the league, Sudur, won Rs 2.1 million whereas the runner-up Three Star bagged a cash prize of Rs 1.1 million. A total of 12 teams participated in the knock-out league being held in Dhangdahi.

Gold price drops by Rs 200 per tola
55 minutes ago