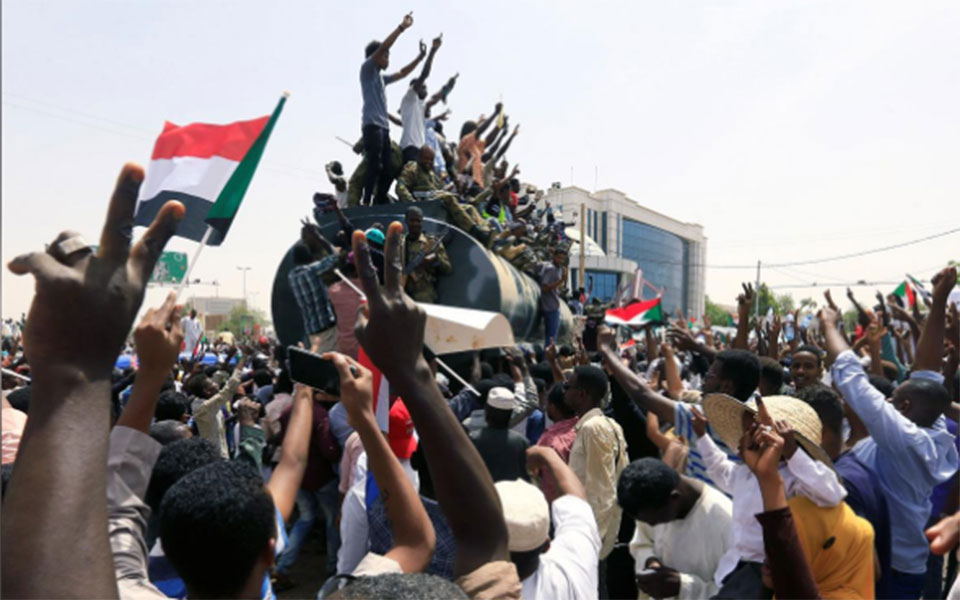 KHARTOUM, April 15: Sudan’s main protest group on Sunday demanded the immediate handover of power to a civilian transitional government, saying it would keep up the street demonstrations which ousted former President Omar al-Bashir last week to achieve its aims.

The Sudanese Professionals’ Association (SPA) called for the establishment of a transitional council which would be protected by the armed forces, adding it would exert “all forms of peaceful pressure to achieve the objectives of the revolution”.

The military council that replaced Bashir, who was ousted on Thursday by the military after three decades in power, announced a raft of new decisions late on Sunday including the retirement of Defence Minister Awad Ibn Auf. Ibn Auf, and his deputy, resigned as head of the transition council after they assumed the positions following Bashir’s ouster.

It did not name a successor to Ibn Auf.

The transitional council spokesman told a news conference in Khartoum on Sunday the military was ready to work with opposition groups to establish a new civilian government.

“The ball is now in the political forces’ court when it comes to the prime minister or a government,” Shams El Din Kabbashi said.

Lieutenant General Omar Zain al-Abideen, another member of the council, said the opposition would have one week to submit their suggestions.

The head of the military council, Lieutenant General Abdel Fattah al-Burhan, had earlier said the council had invited the main opposition parties and protest organizers for a meeting.

But the SPA and other main opposition parties, which together make up a group known as the Forces for Freedom and Change, said they did not attend the meeting.

“We were not invited to this meeting ... we will submit our suggestions for the government to the military council,” a spokesman for SPA told Reuters.

A Reuters witness said the meeting was largely attended by unknown politicians and parliamentarians who are known to be loyal to Bashir’s party.

A sit-in in the Sudanese capital, which began on April 6, was the culmination of a protest movement that began nearly four months ago, triggered by a worsening economic crisis.

Kabbashi said there had been orders by the former regime to disperse the sit-in “at whatever cost,” but the military had refused to do so and will continue to protect protesters.

Several thousand protesters continued a sit-in outside the Defence Ministry and for the first time state television showed footage of people marching and chanting in the streets, while a TV presenter congratulated their “revolution”.

SPA, which had demanded civilians be included on the transitional military council and for Bashir’s close associates to leave, called for the arrest of prominent National Intelligence and Security Service generals, including its former head Salah Gosh, and for the removal of the prosecutor general.

It also called for the arrest of Bashir, whom the army has said it has already detained.

Kabbashi said a committee would be formed to take over the former ruling party’s assets and that Sudan’s ambassadors to Washington, a former intelligence chief, and to Geneva, a former foreign minister, had been sacked.

He also said the military council would release all the army and police officers who participated in demonstrations.

Up to four thousand people were still camped out on Sunday, a Reuters witness said, slightly fewer than on previous days, with some people returning to work for the first time in days.

After deadly clashes at the sit-in last week, the atmosphere was relaxed, with soldiers drinking tea and chatting with protesters.

“We are at our sit-in until we hear the response from the army to the ... demands. We will defend the revolution from hijacking,” Mouawiya Mubarak, a 21-year-old student, said.

“Our demands are clear and have not yet been achieved, why would we go home? Our sit-in is the most powerful weapon in our hands,” the SPA said in a tweet.

KHARTOUM, Sept 14: There have been five confirmed deaths from cholera in Sudan’s Blue Nile state since Aug. 28, the health... Read More...

KHARTOUM, May 31: The satellite news channel Al-Jazeera said Friday that Sudan shut down its bureau, just as the country’s military... Read More...