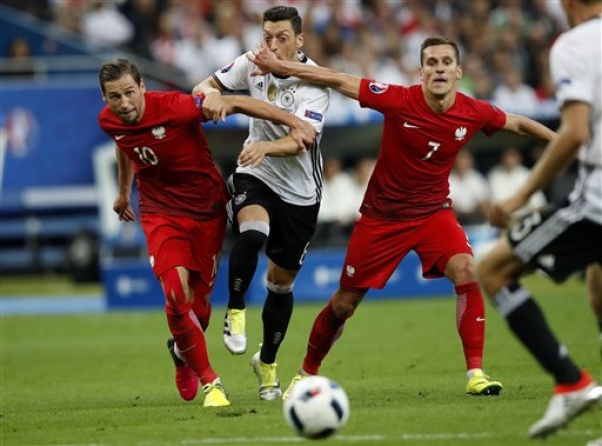 SAINT-DENIS, June 16: Germany and Poland played out the first goalless draw of the European Championship on Thursday in a dour match at the Stade de France.

A glaring miss was fittingly the key moment of a Group C game that led to Ukraine becoming the first team to be eliminated from Euro 2016.
Arkadiusz Milik, who scored Poland's winner against Northern Ireland on Sunday, miscued a header as he fell to his knees in Germany's goalmouth and the ball bounced just wide of Manuel Neuer's right-hand post.

That error, less than 20 seconds into the second half, hinted at better things after a lifeless first period.

However, neither team couldn't sustain any attacking pressure, nor a point suits both after their opening wins. Ukraine will finish last in the group after a pair of 2-0 losses, first to Germany then against Northern Ireland earlier Thursday.

"We created few chances today," Germany coach Joachim Loew said. "We didn't increase the tempo and then nine of 10 Poles were behind the ball."

Poland fans in a crowd of 73,648 cheered loudly at the final whistle, and coach Adam Nawalka turned and applauded to his staff and substitutes in the dugout.

Both teams played as if a draw was a decent night's work, and arguably a product of the newly expanded 24-team format for the championship. Now that most third-place teams advance from the groups, four points will likely ensure a place in the round of 16.
Germany leads the group and, if it finishes top, will be rewarded with playing a third-placed team in the knockout rounds that Loew already seems eager to experience.

"You've seen in other games that the favorites have a problem," Loew said, of "battles of attrition" so far. "In knockout games, they (opponents) will be more open and have to invest more in attacking."

Nawalka said his players were not happy just to have drawn with the 2014 World Cup winner.

"It just shows our ambition," the Poland coach said through a translator. "Every match it looks better and better."