Suarez grabs leveler for Barca after goalline controversy at Betis 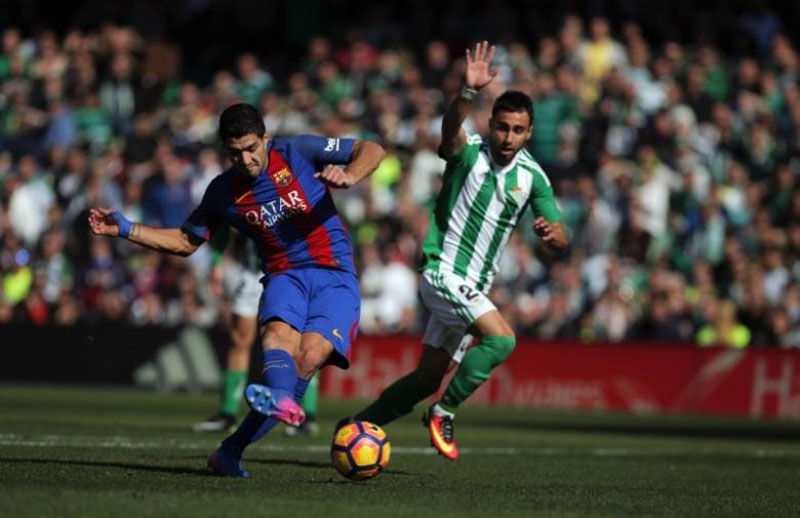 Barcelona's title hopes were dented as they drew 1-1 at Real Betis on Sunday in a game shrouded in controversy after the champions were denied a goal despite the ball clearly crossing the line.

Alex Alegria gave Betis a deserved lead in the 75th minute after the home side had hit the woodwork twice in quick succession although Luis Suarez salvaged a point by arrowing home Lionel Messi's through ball in the 90th.

Before the equalizer Barca were incensed when a cross from Aleix Vidal was deflected towards goal and appeared to cross the line by around a meter before Aissa Mandi scrambled the ball away. Unlike in the Premier League, there is no goalline technology in La Liga.

Vidal also had a shot cleared away in the goalmouth moments later.

Betis striker Ruben Castro missed a gilt-edged chance to seal an unlikely win but failed to beat Marc-Andre ter Stegen after racing through on goal unchallenged.

There was no time after Suarez's leveler for the champions to find a winner, with the draw halting their five-game winning streak in all competitions.

"We did not play well, we made lots of errors in the first half and in the second half they were completely superior to us, we were nowhere near our usual level. The final minutes change our sensations but this feels like a point gained," Luis Enrique told reporters.

"I have nothing to say about the ghost goal, I've seen the pictures. Technology could help, and it's obvious that referees need help."

Barca are second in the standings, one point behind Real Madrid who have two games in hand, and level on points with Sevilla, who can go three clear of Luis Enrique's side when they visit Espanyol later on Sunday.

Real Madrid host Real Sociedad later on Sunday and are looking for a response having been knocked out of the King's Cup by Celta Vigo on Wednesday.

The home side had the better of the first half, with talisman Castro shooting straight at Ter Stegen inside the area, and midfielder Dani Ceballos forcing the German to tip away a shot from distance.

Barca's Neymar was thwarted at the other end by the quick reactions of Betis goalkeeper Antonio Adan.

Betis had Barca on the ropes in an intense spell when Ceballos hit the bar from outside the area and Castro clipped the post with a skidding shot.

The hosts finally found a way through from a corner as Ter Stegen, who had received two knocks to the head in the second half, failed to claim a cross and Alegria turned in the loose ball.

Barca were compelled into action and, after the contentious decision not to award them a goal, Suarez pounced with his 16th league effort of the season, although it could not mask their lackluster performance.

Experts' conclusion: Air accidents increased due to lack of full compliance with ICAO standards
3 minutes ago