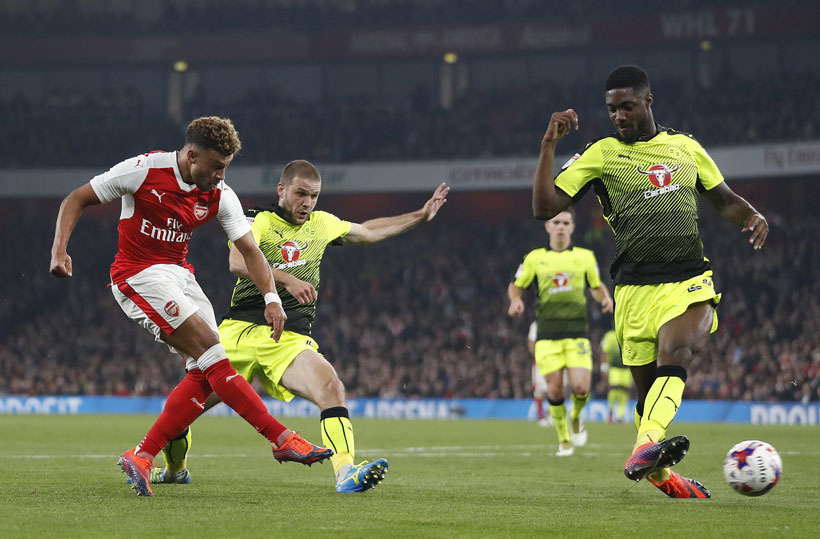 LONDON, Oct 26:  While the English League Cup lacks prestige, it still provides a platform in the early rounds for out-of-favor players or those lacking in confidence to make an impact. Liverpool striker Daniel Sturridge and Arsenal winger Alex Oxlade-Chamberlain did just that on Tuesday.

Both scored twice to secure passage for their youthful teams into the quarterfinals, with Liverpool beating Tottenham 2-1 and Arsenal eliminating second-tier club Reading 2-0.

Sturridge, who has failed to score in seven Premier League matches this season, has only found joy in front of goal in England's second-tier knockout competition when top-flight typically deploy weaker teams. He also scored twice in August in the League Cup — his last Liverpool goals.

The 27-year-old Sturridge has been on the bench for three of his seven league games this season, but he was one of the most experienced Liverpool players to start against Tottenham at Anfield.

After firing into the roof of the net from Marko Grujic's cross in the ninth minute, the England striker tucked the ball under Tottenham goalkeeper Michel Vorm in the second half.

"That is Daniel's talent, his strength," Liverpool manager Juergen Klopp said. "He is a finisher, a really good striker. I have never been in doubt about him, even when he didn't score. He was really good."

Vincent Janssen pulled one back from the penalty spot but Tottenham couldn't force extra time against its Premier League title rival.

"He has acted in front of goal like he didn't deserve to score," Wenger said. "Now he has some belief with his finishing and we hope every time he has the ball something can happen."

Oxlade-Chamberlain poked the ball through defender Tyler Blackett's legs into the corner of the net in the 33rd minute, and netted again with a deflected strike in the second half.

"He has worked a lot mentally to be focused," Wenger said. "It comes out every day in training and it's starting to come out in games."

Premier League side Hull survived a late scare against Bristol City of the League Championship to win 2-1. Harry Maguire and Michael Dawson scored either side of halftime but City forward Lee Tomlin grabbed a goal in the third of seven minutes of stoppage time.

The fourth round will be completed Wednesday with three all-Premier League matches, headlined by United hosting City in the season's second Manchester derby clash between Jose Mourinho and Pep Guardiola. There's also a London derby between West Ham and Chelsea, while Southampton takes on Sunderland.

Hotel industry should be made an industry of national priority thru law: HAN President Rana
27 minutes ago