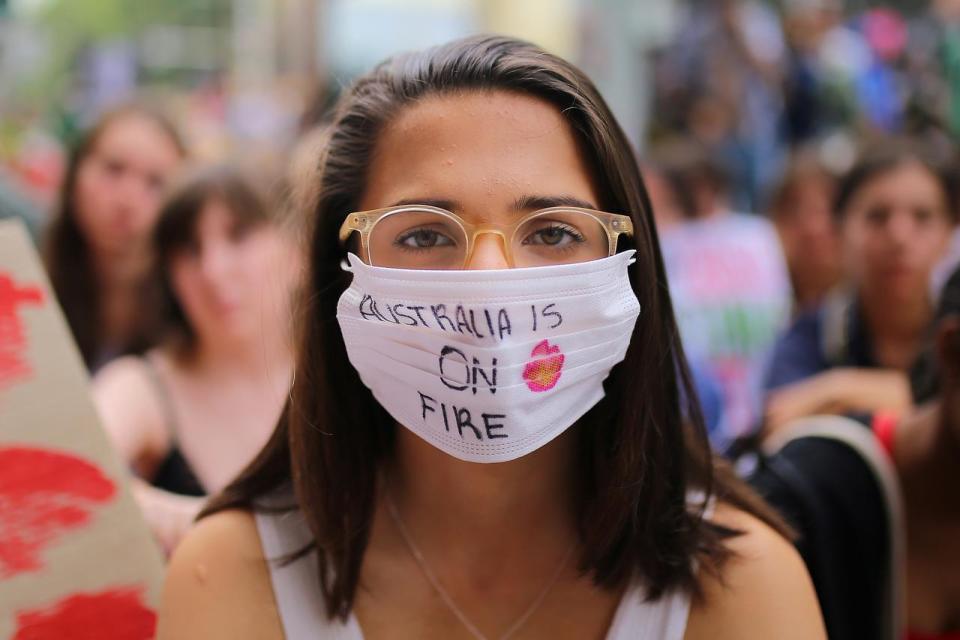 A student activist poses for a portrait during a 'Solidarity Sit-down' outside of the office of the Liberal Party of Australia in Sydney, Australia, November 29, 2019. AAP Image/Steven Saphore/via REUTERS

LISBON/SYDNEY, Nov 29 : Thousands of people in Australia and Europe joined rallies demanding more action on climate change on Friday, aiming to force political leaders to come up with urgent solutions at a United Nations conference next week.

Swedish activist Greta Thunberg had been due to join a student strike in Lisbon, but her environmentally friendly voyage across the Atlantic from New York by sailboat was hit by high winds, delaying her by a few days, she told her social media followers.

Portugal’s student movement still expected thousands to join marches on Friday, building on the celebrity activist’s imminent arrival to mobilise ahead of the United Nations climate summit in Madrid from Dec. 2-13.

“We wish she’d been here, but the movement has to carry on without her. We’ve got to send our message and pressure politicians ahead of the climate summit,” Marianna Louca, 14, told Reuters.

Friday’s climate strike is taking place in 2,300 cities in 153 countries around the world, according to estimates by the climate campaign group Friday For Future.

In Warsaw, activists, some in gas masks, chanted and waved banners saying: “Save our planet”, “Plastics plague our oceans” and “Poland without coal 2030”.

In Berlin, protesters in swimming costumes dived into the chilly waters of the river Spree, holding up a white box in a symbolic attempt to rescue the government’s climate change package.

Activists protested at Amazon (AMZN.O) sites around France, using the annual Black Friday shopping frenzy to denounce what they said was the destructive effect of rampant consumerism, in a backlash against the event driven in part by environmental concerns.

Several dozen protesters staged a dawn sit-in outside an Amazon building in the Clichy district of Paris, holding up a sign saying: “No to Amazon and its world.”

In Australia, students in Sydney and other major cities walked out of class, saying more should be done to combat the country’s bushfire crisis, which many see as a result of climate change.

Australia has for weeks been battling wildfires, which have killed at least four people, burnt about 2.5 million acres (1 million hectares) of farmland and bush and destroyed more than 500 homes.

Holding home-made signs, including “The climate is changing, why aren’t we?”, protesters in Sydney accused the government of inadequate action in addressing the bushfire crisis. Smoke from bushfires in New South Wales state formed a haze overhead.

“Our government’s inaction on the climate crisis has supercharged bushfires,” said 18-year-old Shiann Broderic, one of the event’s organisers, whose home was destroyed in a bushfire.

Australia has pledged to cut carbon emissions by 26% from 2005 levels by 2030, but recent data shows emissions are unchanged.

KHOTANG, March 16: Of the candidates who filled out the exam form of the School Leaving Certificate(SLC) in Khotang district, 383 remained absent. These... Read More...

KATHMANDU, Dec 28: A total of 83,425 Tribhuvan University graduates will celebrate their convocation ceremony on Thursday amidst a grand function... Read More...