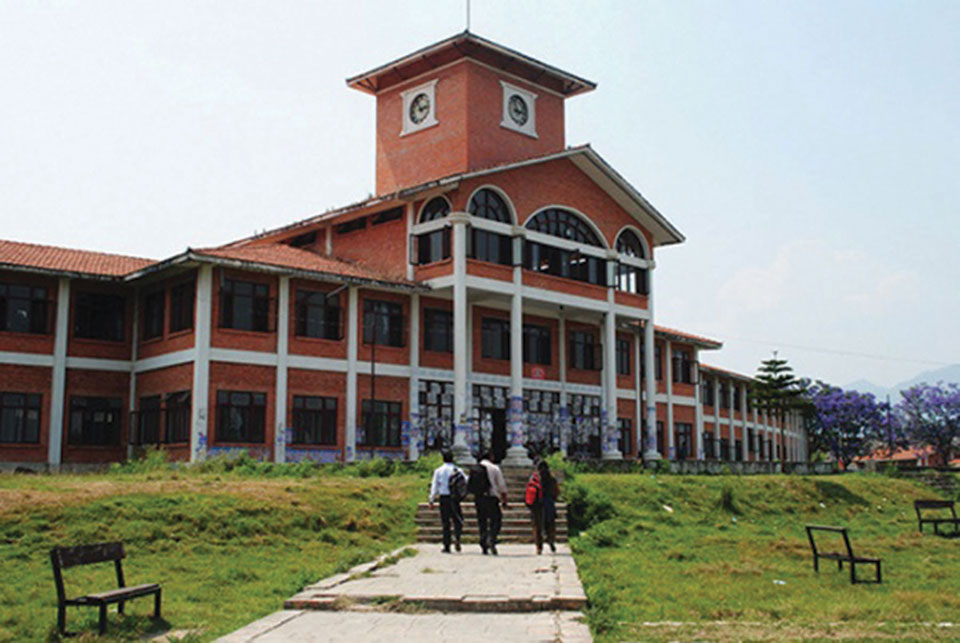 Sunday marked the seventh day of the relay hunger strike being staged by the student unions belonging to Dr Babu Ram Bhattarai's former Nayashakti Party and the Communist Party of Nepal led by Mohan Baidya, according to Bal Bahadur Ramtel, a student leader of Dr Bhattarai's party.

Baidya visited the protesting students on the premises of TU on Sunday. Addressing the students, Baidya demanded that the government scrap the TUSC, which has been "involved in appointing political cadres at the university where ordinary people throng to pursue higher education."

The TUSC has been accused of appointing people close to the ruling Nepal Communist Party (NCP), relatives of TU staffers and opposition party Nepali Congress to permanent posts ranging from driver to deputy administrator. Moreover, the TUSC has also been accused of promoting "the tainted and less-qualified" teachers of the university to professors recently.

Regarding controversial results, appointments and suspected irregularities, cases were recently filed at the CIAA and National Vigilance Center (NVC) against TUSC officials. However, the anti-graft bodies are unaware of these concerns because of influence of the ruling party, said the student leaders of TU. “That's why, we are forced to stage protests,” said Ramtel. “The academic ground of TU has been converted into a place for political recruitment,” he said, adding that they would continue the protests against the anomalies in the university.

Ramtel further blamed the government and TU officials for being indifferent towards a recent controversy over the misuse of USAID funds by the officials of the Central Department of Anthropology, among other several concerns.

The Medical Education Probe Commission (MEPC), headed by former justice Gauri Bahadur Karki, recommended to the then Prime Minister Sher Bahadur Deuba on February 4 to suspend or take action against 43 individuals including officials of Tribhuvan University (TU), Kathmandu University (KU) and Nepal Medical Council (NMC), and experts for their involvement in irregularities while issuing affiliation to medical colleges. The government neither has publicized the report yet nor taken any action against the 43 officials involved in irregularities while issuing affiliation to the controversial Kathmandu National Medical College.

The MEPC, which was formed in April 2017 to investigate irregularities in the medical education sector, submitted its report on Feb 4 to the then prime minister Deuba, recommending various actions against the 43 officials including TU Vice Chancellor Prof Tirtha Raj Khaniya, TU Rector Prof Sudha Tripathi and TU Registrar Dilli Ram Upreti. Prof Khaniya, Prof Tripathi and Upreti, who were appointed from the quota of Nepali Congress, the then CPN (Maoist Center) and the then CPN-UML respectively, were recommended for action after the probe panel found them involved in medical education irregularities including in issuing affiliations to medical colleges.

Two students die after drowning in a river

Not even 'goat sacrifice' could stop students from fainting at school

ROLPA, March 11: The ailing health of the students studying at Pitaraj Basic School (PBS) of Liwang, the district headquarters of... Read More...