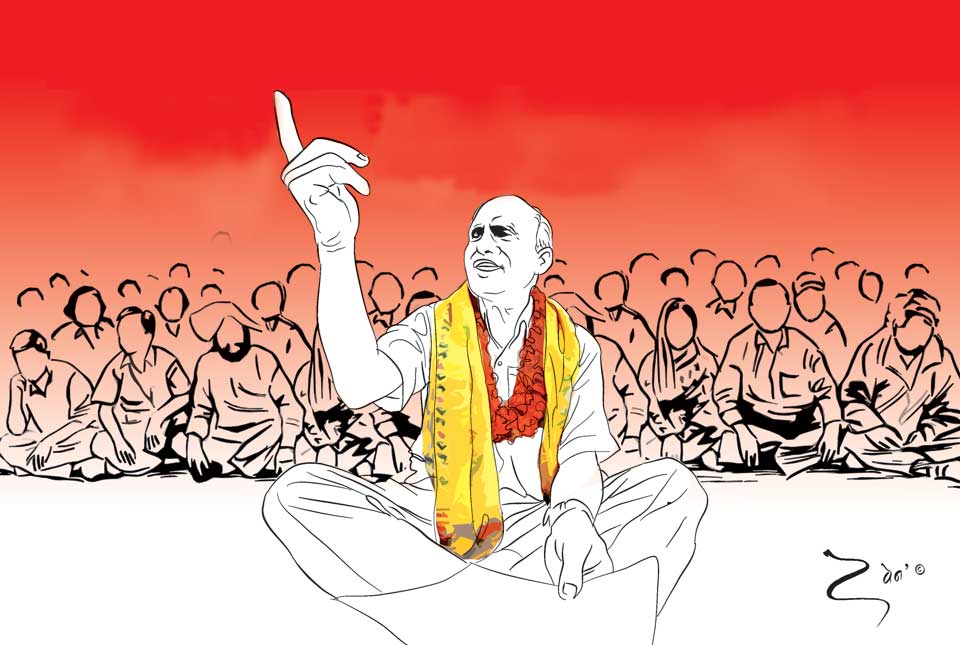 Let us be clear from first. What Dr Govinda KC has been bringing to the fore through his intermittent protests over last one decade is not just a ‘freak’ incident involving one ‘eccentric’ person, as some tend to take it.

It resonates with growing public outrage over institutionalized corruption in Nepal, which has been building up under the cover of constructive political transition.

The chief justice of the Supreme Court may be on the focus at this point given the recent turn of events, but the truth is ordinary Nepalis have lost trust in objectivity of the so-called autonomous institutions including in country’s constitutional bodies. The rot is so pervasive and entrenched that even die-hard supporters of Dr KC would agree that we won’t be able to see light at the end of dark tunnel despite winning one or two moral battles. This is certainly not good for a nascent republic.

Yet, let us not forget that every new republic in the world has undergone this phenomenon at every stage of its formation. Rosa Parks, an ordinary black woman before she became the civil rights activist in the US, had refused to vacate her seat in the ‘colored’ section to the white passenger in 1955 in Alabama, even as the country had become the republic in 1776.

This particular act of Rosa Parks sparked civil rights movement across America. The movement finally resulted in guarantee of voting rights to people of color. Anna Hazare, an ordinary citizen of India born before the country’s independence, has continued his struggle for broader reforms in Indian republic, even after 70 years of its formation.

Nepotism,
favoritism, political appointments
and crony capitalism
are root cause
of institutionalized corruption.

Thus we in Nepal must not lose hope. Democracy offers a chance for self-correction. But for that civil society must remain vigilant all the time. Dr KC is one such member of Nepali civil society who is leading the fight for reforms that other republics of the world have already gone through.

Right to question
The voice for reforms in judiciary that Dr KC is raising would not be construed as contempt of court in any liberal democracy. The court is free to take its own stand on this issue, but in the eyes of average citizens of Nepal, Dr KC certainly is not in contempt. His outbursts have only one larger goal: To reinstate people’s trust in the Supreme Court and to make this highest body of justice system truly honorable.

Let’s examine the term ‘contempt of court’ to understand its origins and applicability. The whole idea of ‘contempt’ is based on the premise that certain part of the society has no right to raise their voice against the ruling elites. The practice originates from the royal and imperial days, when the people were not considered as ‘citizens’ but as ‘subjects’ or ‘slaves’.

People are masters
Tables have turned today. People are sovereign. They are the masters. The first line of our constitution recognizes that. The organs of the state, no matter how significant, and the people in those organs who are carrying out executive, legislative and judiciary functions are mere servants of the people.

Thus in a democracy, people as the masters can hold to account their servants including the prime minister, ministers, civil servants, members of legislative bodies and judges when they feel that they are not working for the greater good of the people and the country. It is, therefore, incumbent upon the state institutions to behave in such ways that people continue to honor them.

That said, we must be cognizant of the fact that we as citizens will have to fight several more battles, preferably peacefully, to make our republic work for common citizens. The struggle starts with weeding out problem of institutionalized corruption from its very root.

Dr KC has brought out the rot in medical education and administration to a public view in a brilliant manner. He has the perseverance and moral strength to fight to uproot these ills. And yet, we must also recognize that institutionalized corruption is not limited to one sector. Nepotism, favoritism, political appointments and crony capitalism are the root cause of institutionalized corruption. We cannot simply fight to remove the symptoms. We must diagnose the disease and root it out. Unless the citizens do that, no constitution could ever deliver on its promise. Prosperity and general wellbeing will remain just a dream. Politicians and demagogues will keep vicious cycle going on forever.

Learn from history
Those who do not know the history’s mistakes are doomed to repeat them, goes the popular saying. Most revolutions for democracy and republican order in Europe and North America met with setbacks in their formative years, some for a long time.

Most republics needed multiple calibrations—many a complete overhaul before they became workable. From 1792 to 1954, France, one of the first republics of the world, had to undergo so many upheavals. The present day France is the fifth version of the republic.

From Weimar Republic in 1919 to United Germany in 1990, Germany too saw several versions of the republic. Only two years after United States brought into force its constitution ten major amendments were introduced in 1791 in order to protect civil rights, popularly named Bill of Rights. The list goes on.

The constitution we have must be implemented in good spirit. The civil society must remain on guard watching if in its current form it can effectively deliver on the aspirations of common citizens. If it cannot, we should all be open for making necessary changes.

Republic of Nepal is sacrosanct, its constitution is not. Civil society and its representatives like Dr Govinda KC have every right to question the efficacy of constitution and its functionaries including the judges. Eternal vigilance is the price of liberty.

The author is the former prime minister and the coordinator of Naya Shakti Party Nepal  Twitter: @brb1954

Life: A game of Adversities

Life is a roller coaster ride. They say. The ride is full of ups and downs, darkness and light. Some... Read More...

KATHMANDU, Feb 5: All three tiers of government can manage the financial resources required to run their administrative set ups in... Read More...