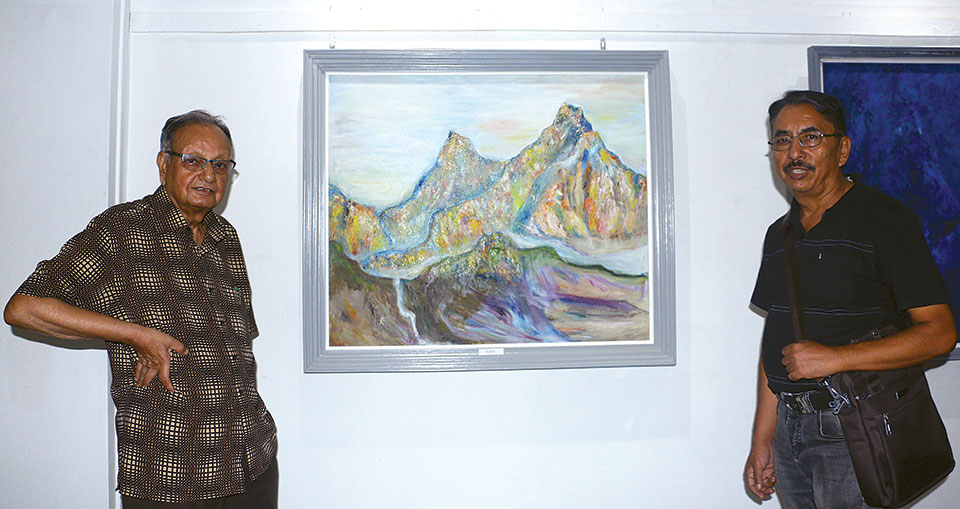 An art exhibition at The Taragaon Museum, located in Bouddha, Kathmandu, sees a turnout of around 250 people a day. However, according to various museum curators, good turnouts like these are limited to either exhibitions of well-known artists or contemporary art showcases in well-known galleries. If these criteria aren’t met, the circumstances paint fairly bleak picture.

Roshan Mishra, director at The Taragaon Museum, says that when it comes to contemporary art, Nepalis do take some time out to come and view it – some out of curiosity while others out of interest. “But the case isn’t the same when an exhibition is a bit more exclusive like, say, conceptual art, minimalistic art or something related to classical architecture,” he says.

Moreover, for anyone working as an artist in Nepal, it takes several years to receive proper recognition and be able to work full-time as an artist. Artists say that it’s even more difficult if you are doing something avant-garde i.e. if your work is something completely new or experimental.

For instance, when Sunny Shakya, a budding photographer based in Kathmandu, first started taking pictures by merging modern toys (like the Hulk or Batman) and traditional Nepali culture and places, people didn’t consider it art. And that disheartened Shakya even though he knew that these images were his efforts to give street photography another dimension. “It was only after I exhibited my work earlier in July that I finally received a sense validation that my work was as meaningful as a landscape painting done by an established artist,” he explains adding that people are a little dubious when someone tries something that isn’t already an established idea.

The case was similar for Kapil Mani Dixit, some 20 years ago, when he first started experimenting with nude paintings. “Nude paintings were considered a taboo and people weren’t that open about viewing them. So I had limited audience,” he says. But when he exhibited his work again after living in the US for over a decade, he was pleasantly surprised to see the change in people’s perspective. “People had become more flexible in their interpretations of art and that I would say is a move forward,” he says.

However, it’s only in the recent years that people have finally started to consider art as not just a hobby but a full-fledged career option. “I’m assuming most people still want their children to be doctors and engineers but there are some who are ready to invest in their child’s interest in photography, etching, painting, sculpting and the likes,” says Dixit.

Manish Lal Shrestha, another veteran in the art scene in Nepal known for his multidimensional visual art, agrees with Dixit’s statement that it was only around the early 2000s that people started taking artists seriously. “All of this skepticism about a career as an artist stems from the pressure to make money. In the past, artists rarely had clients willing to pay good money to buy or sponsor their work,” he says. However, now that artists and art are finally being given its long-due recognition, people have become aware of the wide range of opportunities in art. According to Shrestha, this is evident from the fact that parents have started sending their children to art classes over the weekends. “They have become aware that art is not a waste of time, it’s a medium to channel one’s creativity and expressions,” he says.

However, both artists agree that it’s one thing to pursue art as a way of creative expression and a whole another thing to try and make a career out of it. “This is where young and budding artists go wrong. They expect their works to be sold for thousands of rupees overnight and when that doesn’t happen, they get disheartened,” says Dixit. He also argues that the culture of visiting art exhibitions and collecting art is what needs to grow for artists to be able to fully rely on their passion and career.

For both Dixit and Shrestha, it took years of struggle to become household names even within the art community. Receiving recognition as an artist was another battle. “Rather than hoping to sell their work at their first-ever exhibition, an artist should focus more on getting his work recognized,” says Shrestha adding that an artist’s life is full of strife and that it demands a lot of patience and perseverance.

Sangeeta Thapa, curator of Siddhartha Art Gallery, says that except for a select few established artists, most artists she knows are doing other work on the side to sustain themselves. She adds that though the number of people coming to view an exhibition might have increased over the years, people who buy art are still limited. “It’s great to have people come in and look at your art but for a gallery as well as the artist to sustain themselves, people have to buy the work,” she explains.

Among the many ways that can help artists get recognition, both Thapa and Shakya agree that promotion by the media as well as individuals who come to see the exhibition is the most effective one. “You don’t need a degree in art history to write about a painting that you liked, a few sincere words about how you felt looking at it or how you interpreted it is enough to make anyone curious,” says Thapa adding that a small tweet or a mention in the newspaper can act as a bridge between a potential buyer and the artist. Moreover, she also advises other galleries and museums to keep their shows on for longer (at least three weeks) so people can navigate their schedules and the city traffic to come see the exhibits.