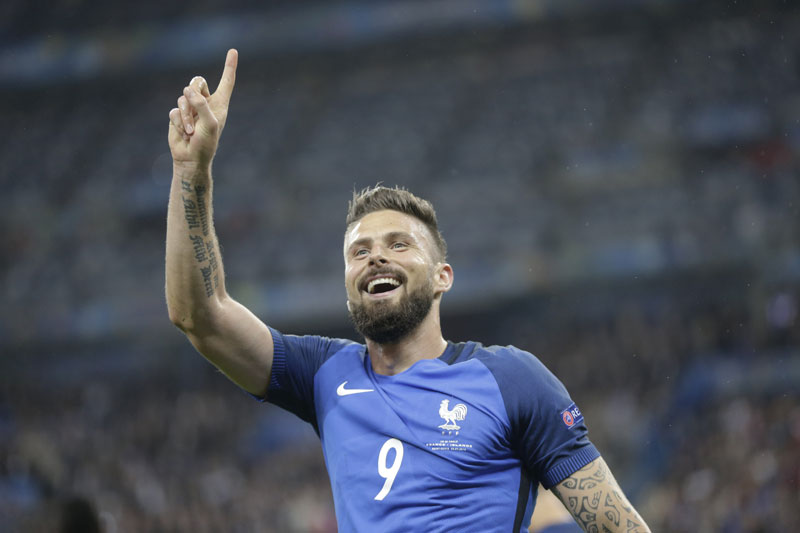 PARIS, July 4: France striker Olivier Giroud said his team is keen for a revenge against rivals Germany after setting up a semi-final clash with the reigning world champions with a thrilling 5-2 victory over Iceland in the European football championship quarter-finals.

Giroud scored a brace as Paul Pogba, Dimitri Payet and Antoine Griezmann also got on the scoresheet, which helped them thrash Iceland and book a place in the semi-finals.

Earlier, Germany defeated France 1-0 in the quarter-finals in 2014 FIFA World Cup. And Giroud admitted the prospect of Germany in the semi-final is a completely different proposition.

"They are the World Champions and they are often in the last four of major tournaments. We have a lot of desire to try and get our own back for what happened in the World Cup," Giroud was quoted as saying by goal.com.

"We beat them here in a friendly (2-0 in November) but it will be completely different. I hope in Marseille the French public are as excitable as they were (in Paris against Iceland) and will support us all the way," he added.

"We are lucky enough to play a semi-final in front of a home crowd. I am very proud of what this side is achieving and I hope that once again we will come up with the right result."

Giroud, who has often being criticised for not being a smooth finisher, has scored three goals in the tournament so far. He rated this performance as best for the national team.

"From my perspective I am pleased, no more than that. I am very happy for the team, my family and the French public as a whole," the 29-year-old said.

"I don't know whether that is my best performance for France, I have had other good games. But out of the 2014 World Cup and Euro 2016 it is probably my best in a major tournament," Giroud, who won man of the match for his display," he added.

"I felt really good physically right from the start of the match. We are used to making bad starts to matches and we changed that. We need to retain that. We were on top form the first minute and we were very clinical."

SAINT-DENIS, France, July 4: The Icelandic thunderclap roar proved no match for the sheer talent of France as the hosts finally showed... Read More...