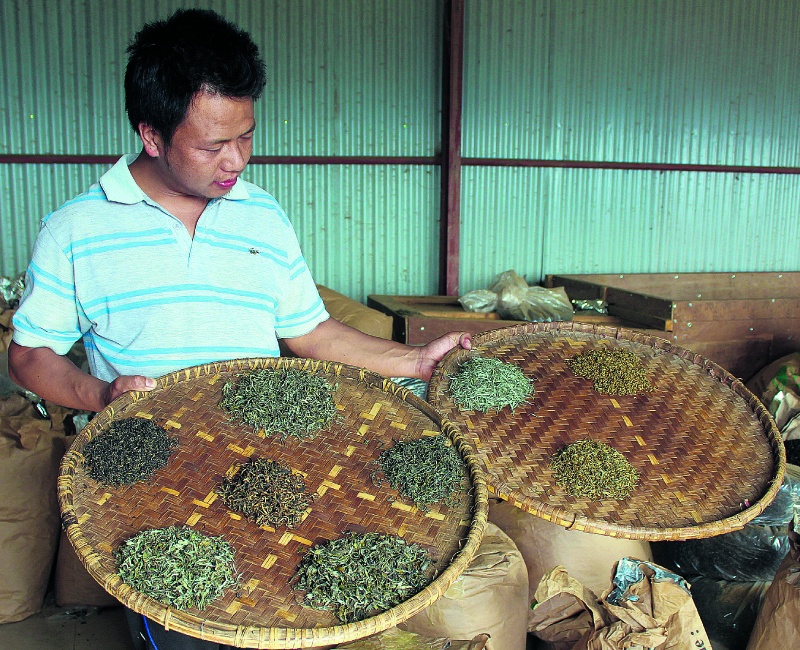 It is important to enable farmers to meet diverse market needs and to tackle changing climates.

Nepal’s farming practices are diverse for two reasons. One, Nepali farmers try to grow all kinds of possible crops to meet their daily needs and two, because of climate variation. We really have a wide range of climates, from tropical to temperate to arctic in Nepal’s hills, Tarai plains and the high mountains. More than 500 species of edible genetic plant resources are available here, of which nearly 200 species are under cultivation.

Lands are mostly flat and fertile in Nepal’s south. Rice, wheat, maize, jowar, bajra and different types of pulses are main crops of this region but cropping is mainly rice-based. Rice, which is planted in July-August and harvested in October-November, needs hot and wet climate. There must be plenty of water during the period of its growth that lasts around five months.

Wheat, grown during winter, is the second main crop of Tarai. It is sown in November or December, after the rice is harvested. The crop becomes ready in five months and harvesting of wheat is generally complete by mid-April. In the Tarai, farmers also grow sugarcane—one of the main industrial crops of Nepal—which matures in around 10 months. When the plants mature, they are cut and sent to the sugar factory for crushing to obtain its juice, which when refined is used to make molasses, chaku and sugar.
Jute, another important crop of Tarai, is mostly grown in Morang and Jhapa districts. Strong fiber can be obtained from the stem of jute plant, which is used to make gunny bags, ropes and a number of other items. But planting jute is a vanishing trend.

There are basically two types of lands—bari and khet—in the hills. The rain-fed upland is called bari and it is unbunded. The khet, usually distributed along the river/stream banks, is bunded for irrigation, as is highly productive, and khet has better cropping potential compared to bari.

Maize is grown on non-irrigated bari; and rice on irrigated khet. Although rice and maize are two major staple crops of the region, wheat, millet, barley, potato, mustard and some other minor crops also make important contribution to hill agriculture.

Horticulture has high potential in the hilly region and hence, horticultural crops, mainly vegetables, are replacing wheat in the rice-based cropping system. Major vegetable crops of mid-hills are cauliflower, cabbage, radish, carrot, leaf mustard and spinach. In many cases, maize fields are also being converted into fruit orchards. The commonly grown fruits of the mid-hills are mandarin orange, sweet orange, lime, lemon, pear, peach, etc.
Tea plants grow well on the slopes of hills where it rains for most of the year. The hilly areas of eastern region are ideal for tea. Similarly, large cardamom is also grown in big areas in the eastern hills. Ginger is grown throughout the mid-hill districts and vegetable seeds and coffee from the region are considered quality products.

Three crops are produced in a year on irrigated khet below 1,000 meters above sea level (masl). At higher altitudes (1,000–1,800masl), a two crop system dominates, while only one crop is grown at above 1,800 masl. The farming system of the hills is still subsistence based. But there has been much effort to introduce modern technologies with improved varieties of crops, and other inputs such as fertilizer, agrochemicals and small irrigation. Intensive utilization of arable land, and proper management and utilization of natural resources has been encouraged in recent times.

Many parts of the mountain region are unsuitable for crop cultivation due to its rocky and uneven lands. Mountains receive little rainfall and soil is generally sandy and dry. But mountain region has vast grassland, which is good for grazing. Therefore livestock is the main source of income in this region. Climate varies from warm temperate to alpine.

Grazing includes migration of ruminant livestock and utilization of vegetation. Herds are made up of yaks, chauri (Himalayan cow), cattle, sheep, and goats. Some parts of this region are suited for different kinds of crops. Naked barley, buckwheat and potatoes are traditional crops of the mountain region. Apart from apples, this region is also known for its medicinal and aromatic plants.

Diversity in farming and livestock is an inherent characteristic of Nepali agriculture. Further cultivating this diversity will enable farmers to successfully meet diversified market needs and to tackle changing climate conditions. International research shows that crop rotation results in high yields, less pests and weeds and less reliance on chemical pesticides, and thus soil fertility is enhanced with this decreased use of synthetic fertilizers.

Such scientific research on long-term productivity, conservation of soil, land, water, and habitat and adaption to climate change is sorely lacking. Farmers are stewards of our land and environment. They need every support of agricultural scientists.