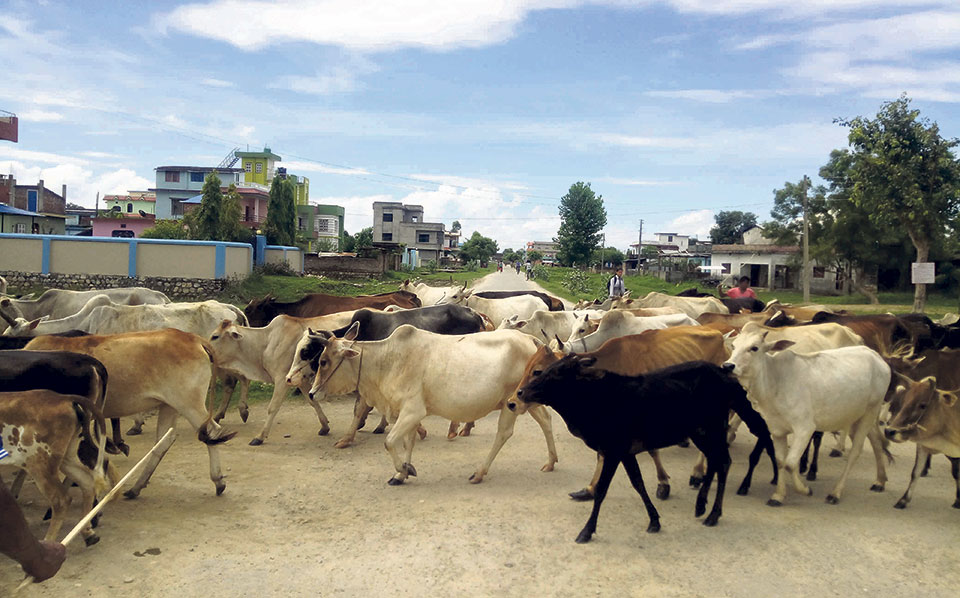 Stray cattle are seen on a road in Tikapur Municipality, Kailali in this recent picture. Photo: Yogesh Rawal/Republica

TIKAPUR, July 29: Dozens of stray cattle, most of them too old to walk, look exhausted and directionless as they crowd the main road of Tikapur these days. They sit on the street in broad daylight and stay around long hours posing a safety threat to drivers, riders and passerby. Hungry, thirsty, and homeless these animals reflect how owners disown cattle after they find them worthless.

It is not that Tikapur Municipality did not try to address the issue. However, the efforts have not been enough to get stray cattle into a safe zone. And this has become a nuisance for locals.

“Cattle have taken away our peace of mind. They are such nuisance,” said a local of Banagaun of Tikapur Municipality – 1, Chamman Chaudhari. “We have to guard our farms against them day and night. Our nights have become sleepless.”

Stray cattle, according to locals, storm into farms at night though at day time they leave the fields. Farmers are irritated and angry that their paddy fields have been ruined by cattle. Chaudhari, who planted paddy in his farms, stated that he has given up hopes of a good harvest this year. “When you let cattle into farms to graze just a few days after paddy plantation, you cannot expect any good return. I am distraught,” he said.

Stray cattle have reportedly been damaging maize as well. Along with them, vegetable farmers are anxious. “If this goes on, we won’t be able to continue farming. We have to look for some other work,” said Chaudhari. “Only a few cattle can  destroy your year’s hard work.”

Even though locals are enraged with stray cattle, they also admit that these cattle are also suffering. Not all of them get to enough fodder to in farms. Many of these abandoned cattle are sick, and some others are injured. In lack of medical intervention, such wounded animals suffer a lot and face an untimely death.

“We had come to put pressure on the municipality. The officials discussed with us, and we jointly worked to chase off stray cattle,” Chaudhari said, while spotted outside the municipality office of Tikapur. “We have left them across the river at the jungle side. But this cannot be a permanent solution,” he added.

Some of these cattle will find their way back to human settlement. They like to live near human settlement, so they often end up in one nearest to them. But like us, others also chase them away.  Thus, stray cattle end up roaming from one to another place.

But from where do they come in the first hand? Who leaves them without care? Farmers themselves leave the cattle helpless. After they are milked until they can be and ‘turn useless’, cows are abandoned. Similarly, oxen are disowned after they are not able to plow the farms.

“Villagers, when they are done with their cattle, leave them near the Tikapur market. Since they have nowhere to go, the cattle wander near the road,” said a local of Tikapur, Deepak Saud. “It is unfortunate.”

Some of the cattle wandering on roads in Tikapur are from nearby Indian towns and villages. In lack of legal hurdles and monitoring, villagers from India find it easy to chase away their unwanted cattle towards Nepal.

According to Ganesh Budha of Lalbhoji of Bhajani Municipality – 5, a considerable number of cattle come from the bordering villages of India. “Let’s not say all the cattle have come from there, but many have come from that side. When they don’t need their cattle anymore, they find it convenient to bring and leave them here,” he said. “If you leave them just near your home, most cattle get back to their old address. So, it is safer for them to chase away their cattle on this side of the border,” he added.

The municipality also has a shed for cattle in which it has been caring for over 400 animals.

“Municipality alone cannot solve this problem. People should stop abandoning their cattle,” said Majhi. “Managing stray animals is a very serious agenda. All the local bodies in the country should own this agenda and work strategically,” he added.

TIKAPUR, August 27: The ward office of Tikapur Municipality-7 has issued a notice and appealed to local residents to remain... Read More...

DHANGADI, June 16: The government on Friday provided hefty compensations to 'victims' of the infamous Tikapur incident of 24 August, 2015... Read More...