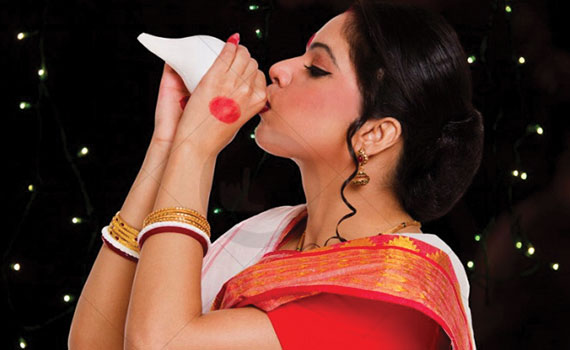 Since water is a fertility symbol, shankha, being an aquatic product, is also considered symbol of female fertility

I just read in the news that a contest was held in Rupendehi regarding who would blow the best shankha, the conch.  Some where in the middle it was mentioned that there were 47 people who participated in the contest and there were three women. This surprised me.  Yes, indeed the art of blowing shankha has almost disappeared in Nepal. Women rarely blow it here.  Whereas in India there are quite a few women who blow shankha. In Bengal women blow shankha during marriage ceremony.  In our culture blowing sankha is a morning ritual for some people after their puja each day. The sound of the shankha symbolizes the sacred Om. Since Vishnu holds the conch he is also known as the god of sound. The shankha Vishnu’s holds in his lower right hand, represents the creative tendency.

Shankha is blown during morning puja and aarti.  The other day shankha naad from my neighbor’s morning puja transported me back to the early 60s in Kolkata.  It reminded me of Bengali girls wearing white sari with red border blowing shankha during marriage ceremonies in Kolkata. At the time I thought shankha was a trumpet.  Then during Durga Puja I saw it in one of the hands of Devi Durga. I was confused. There had to be a reason for Durga to carry it. That is when I wanted to know more about shankha. During sixties there was no internet so the only way to find out about something was looking for the information in books in library.  I know people expect you to know a lot of things by yourself and you feel ashamed of asking about common things at home. Even if you gather all your courage and ask it anyway, you fear ending up with another question, ‘yeti pani jandainau?’ (you don’t know even this?). You might feel humiliated instead of getting answer to your question.

That is usually the case in almost everyone’s home. Your question remains unanswered till you somehow, find out the answer you are looking for, but I was fortunate. I had the privilege of asking my father about shankha.

Symbol of purity
He told me shankha was an object of worship and blown during pujas, sometimes also during aarati. Shankha symbolizes purity and is considered auspicious in both Hinduism and Buddhism. When blown it produces a sound, often associated with OM. The shankha, Krishna used during the battle of Mahabharat is known as Panchajanya.  There is a story related to this shankha.
When Krishna finished his studies, he asked his guru Sandipani what he wanted as guru dakshina. At this Sandipani wanted his son, who had suddenly disappeared, back. Krishna had promised to get his guru’s son back as guru dakshina.  Sandipani’s son had been kidnapped by Shankhasur, an evil sea demon living in the Prabasa Ocean in the form of Shankha. When Krishna found this out, he entered the sea, defeated shankhasur and took the shankha for himself. He also rescued and returned his guru’s son. It was Krishna’s guru Sandipani who named that shankha as Panchjanya.

The other characteristics Panchajanya is that it spirals clockwise, and is said to be a fountain that evolves the five elements: water, fire, air, earth and sky. The ones that spiral counterclockwise are said to defy the “laws of nature,” and belong to Lord Shiva.  Durga, being the avatar of Shakti also carries a Shankha. I am pretty sure you are wondering how sound is produced when Shankha is blown. Well shankha is a wind instrument: we blow into the hole on the tip of it.

Air blown through this hole, travels around the whorls of the shankha, producing a loud, sharp, shrill sound known as shankhanaad. This is the reason shankha was used as a war trumpet. The battle in Mahabharat began and ended each day with the blowing of Panchjanya by Lord Krishna. The respect for the shankhanaad was such that after the shankhanaad, a ceasefire or truce period started, in which each side agreed with the other to suspend aggressive actions and the battle began again the next morning after the shankhanaad.

Shankha is the habitat of large predatory sea snail species, Turbinella pyrum, found in the Indian Ocean and surrounding seas. Surprised? Don’t be, because what I am going to tell you will surprise you even more. I had a very interesting experience in Hawaii.   One of my friends asked me to put the decorative shankha we had just bought as a souvenir, up to my ear. Lo and behold! I heard the roar of the waves rolling onto the shore. No matter how far away from the ocean I stood, I could still hear it.  I know, some of you are saying, ‘how can that be possible?’  I too was puzzled. I thought it was the echoing of my blood rushing through the blood vessels of my ear. Later I learned the wave-like noise is ambient noise from around me. The shell acts as a resonating chamber. When sound from outside enters the shell, it bounces around, creating an audible noise. So, the louder the environment you are in, the louder the ocean-like sound will be.

Shankha is not just used for puja.  It has other significance too. In Bengal, married Bengali women wear bangles made of shankha. These bangles are called shakah.  Shankha due to its aquatic origin and resemblance to the vulva, is also an integral part of the Tantric rites. Since water is a fertility symbol, shankha, being an aquatic product, is also considered symbol of female fertility. In Ayurveda shankha bhasma is used to treat many ailments.

In Buddhism, the shankha has been incorporated as one of the eight auspicious symbols, also called Ashtamangala. The right-turning white shankha, represents the elegant, deep, melodious, interpenetrating and pervasive sound of Buddhism, which awakens disciples from the deep slumber of ignorance and urges them to accomplish their own welfare and the welfare of other. So the next time your children ask you about shankha, you have enough information to enlighten them.  Right parents?

In Nepal, nobody wants to take responsibility for the injustice perpetrated in the name of caste and gender in the... Read More...