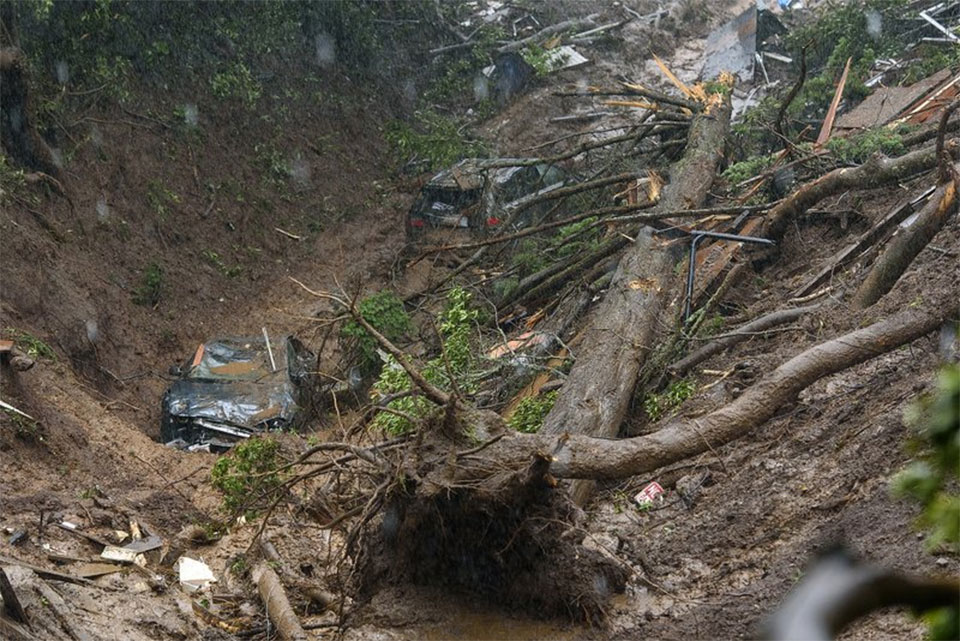 At least two people died as the powerful system swept in from the Pacific Ocean and unleashed damaging rain, snow and wind.

The system was moving across the U.S. West into Wyoming and Colorado after walloping Northern California and southern Oregon a day earlier.

The National Weather Service reported staggering rainfall amounts across California, including more than 9.4 inches (24 centimeters) over 48 hours at one location in the San Bernardino Mountains east of Los Angeles.

A woman pulled from rising water in a low-lying area between those mountains and LA had a heart attack and died at a hospital, said Capt. Ryan Rolston with the Corona Fire Department. The unidentified woman was one of nine people and three dogs rescued in a flood control channel where homeless people camp, Rolston said.

In Escondido, northeast of San Diego, firefighters pulled the body of a man from a concrete-lined waterway. Witnesses told authorities the man had been paddle-boarding in the surging waters.

North of San Francisco, a mudslide barreled over cars, uprooted trees and sent a home sliding down a hill and smashing into another house in Sausalito.

A woman was rescued from the splintered wreckage with only cuts and bruises. Susan Gordon was buried under a tree and mud for two hours while crews dug her out, her son wrote on an online fundraising page.

Chris Parkman said it’s been years since a storm so powerful has hit the hillside community, where at least 50 properties were evacuated.

A deluge southeast of Los Angeles washed away a section of a two-lane mountain highway. Photos by the state Department of Transportation showed about 75 feet (23 meters) of pavement completely collapsed along State Route 243 near the remote community of Idyllwild.

“We’re basically stranded right now,” said resident Gary Agner, adding that several other roads were closed because of flooding and debris. “I’m glad I went to the grocery store yesterday.”

The risk of flooding led officials to order people out of areas burned bare by a summer wildfire in the Santa Ana Mountains, with flash flood warnings blanketing a huge swath east and south of Los Angeles.

Authorities also told parts of artsy Laguna Beach to evacuate, while the desert resort city of Palm Springs urged residents to stay where they were because of flooded streets. Flood advisories extended to Arizona.

Weather was so severe that the Hollywood Walk of Fame had to postpone the dedication of a sidewalk star honoring the band Aerosmith. Knott’s Berry Farm and Six Flags Magic Mountain theme parks closed.

A flooded creek led authorities to urge about 300 residents to leave a community some 20 miles (32 kilometers) west of Paradise, a town destroyed last year by the nation’s deadliest wildfire in a century.

The storm followed more than a week of severe weather in the Pacific Northwest and was the latest in a series of storms that has all but eliminated drought-level dryness in California this winter. It’s fueled by an atmospheric river — a plume of moisture stretching across the Pacific Ocean nearly to Hawaii.

Nearly 37 percent of California had no level of drought or abnormal dryness, the U.S. Drought Monitor reported Thursday. About 10.5 percent of the state was in moderate drought, just over 1.6 percent was in severe drought. The remainder was in the abnormally dry category. The numbers reflect data gathered up to Tuesday.

Atmospheric rivers are long bands of water vapor that form over an ocean and flow through the sky. Formed by winds associated with storms, they occur globally but are especially significant on the West Coast.

Even before the height of the storm, mandatory evacuations were ordered near the wildfire area in the Santa Ana Mountains where officials said there was a high risk of debris flows.

Tim Suber chose not to leave his hillside neighborhood in Lake Elsinore. He said Thursday that he’s lost count of how many times his family has been evacuated between last summer’s devastating wildfire and this winter’s storms.

The rain was so heavy that “it sounds like a hundred bowling balls a minute are going down the creek” behind his house, Suber said. A neighbor had mud in his pool, but so far the area hadn’t lost power and culverts and washes were handling the runoff.

Wintry weather closed Interstate 80 across much of Wyoming and sections of at least four other highways. Multiple avalanches disrupted highway traffic in northwestern Montana near the Idaho border.

A family of 18 says corona is overrated
14 hours ago

800,000 households likely to get electricity for free
8 hours ago

Number of people dying of coronavirus in Nepal rises to eight
8 hours ago
Tax rise on electric vehicles will hit govt plan of making country self-reliant in energy use: Lawmakers
11 hours ago
Supreme Court orders govt to provide goods to needy for preventing COVID-19 pandemic
4 hours ago
Hong Kong to evacuate its 330 people stranded in Nepal on Monday: report
5 hours ago

800,000 households likely to get electricity for free
8 hours ago

'I can't breathe' protests heat up as curfews imposed in several U.S. cities
12 hours ago

A family of 18 says corona is overrated
14 hours ago

LIVE: Meeting of House of Representatives underway
16 hours ago