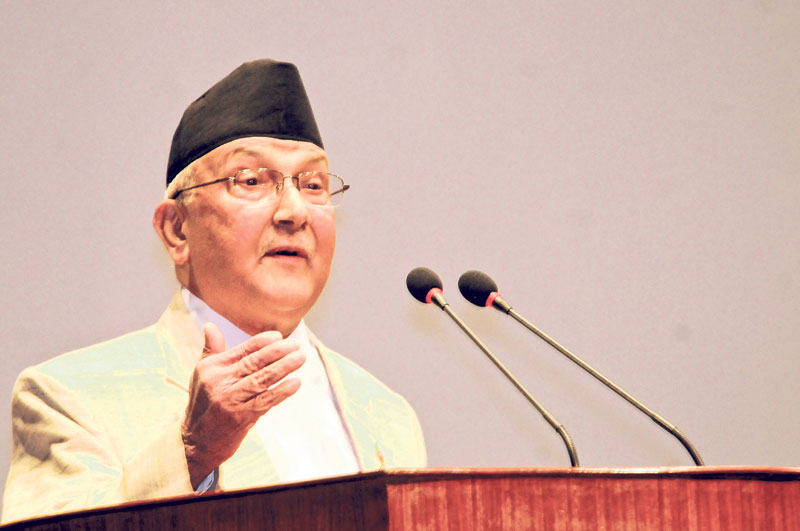 KATHMANDU, July 10: Prime Minister K P Sharma Oli has sought clear answer from its major coalition partner CPN (Maoist Center) whether it wants to give continuity to the present government or quit to form a new coalition.

Irked by recent “anti-government statements” by ruling Maoist leaders, the prime minister urged the latter not to do any activity against the present coalition while remaining in the government.

“We can even part ways under an understanding if you want, but it is clearly against coalition culture for a major ruling partner to criticize the government,” a leader close to the prime minister quoted him as saying at the meeting of leaders from ruling parties held at the prime minister’s official residence at Baluwatar on Sunday evening. “Ruling leaders themselves have been giving statements that have fueled rumors that the government is going to be changed. It has only weakened the government and this is unfortunate.”

Also, some leaders from other small ruling political parties including Deputy Prime Minister Chitra Bahadur KC of Rastriya Janamorcha had reportedly urged Chairman of CPN (Maoist Center) Pushpa Kamal Dahal not to engage themselves in any activities aimed at toppling the government while still remaining a part of the government.

At last, the leaders reached an understanding that the issue should be settled mainly by PM Oli and Dahal. “For that, the two leaders will sit for a talk soon,” Deputy Prime Minister CP Mainali of CPN (ML) told Republica.

Leaders informed that the Maoists had strongly raised the issue of implementing the nine-point agreement and other two-party understandings without any further delay.

CPN (Maoist Center) senior leader Narayankaji Shrestha said that they asked the prime minister to implement the past agreements and discussed about exploring ways on forming a national consensus government.

The prime minister’s press advisor Pramod Dahal, however, said the discussion during the meeting was mainly focused on further strengthening the coalition.

Earlier, a meeting of top leaders from the Maoist Center had decided to find an alternative to the government “if the prime minister continues to ignore implementing the past agreements".

Name, capital of Province 2 to be decided through voting
51 minutes ago