Stocks see strength as Nepse jumps 22 points in the week 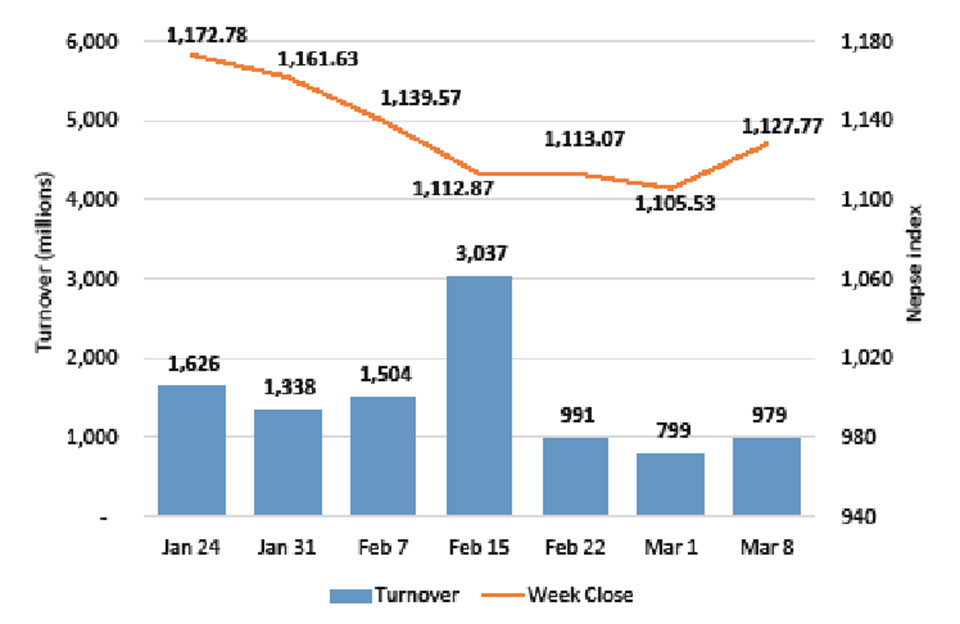 KATHMANDU: Stocks opened the review period on a feeble note as the Nepal Stock Exchange (Nepse) index shed almost 5 points on Sunday to hit a fresh 3 year low at 1,100 points.

Market reopened on Tuesday, after holiday on Monday, where stocks clawed back some of Sunday's losses. Nepse edged 2 percent higher in the session. Nepse extended its advances further on the remaining trading days.

While the bourse saw a gain of over 9 points on Wednesday, Nepse shot up by 16 points on Thursday. Eventually, Nepse closed the week 1,127.77 points – up 22.24 points or 2.01 percent against the week earlier.

Investors have found some respite from the long term downtrend following the weekly gain. Further, investors and traders seemed slightly inclined to take long positions in the exchange as most of the stocks have come down to some of its lowest levels in the current juncture. Market participation also showed some improvement this week as the average daily turnover stood at over Rs 24 million compared to Rs 20 million in the previous week.

Sensitive index, gauging the performance of Class 'A' stocks, moved on par with the broader index. The index closed the week 2.10 percent higher. In terms of sectoral performance, most of the sub-indices closed higher barring Trading and Manufacturing & Processing sub-indices which fell 1.10 percent and 0.49 percent, respectively.

Similarly, Microfinance and Non-Life Insurance scrips also closed on a firmly positive note as the respective sub-indices climbed 2.87 percent and 2.79 percent, respectively. Sub-indices of Hydropower and Hotels segments also registered gains of over 2 percent each, while that of Banking segment went up by 1.75 percent.

In the week, Panchthar Power Company Ltd floated over 1.75 million units Initial Public Offering (IPO) shares to the general public. The issuance, which was oversubscribed by around 2 times, was allotted to public by the issue manager Sanima Capital Ltd on Thursday.

ARKS weekly technical analysis indicates the market forming a bullish candlestick following the surge experienced late in the week. With the weekly gain, Nepse index has recovered all of its previous week's losses and is in the verge of staging a rebound after hitting crucial 1,100 points mark in the week.

Even though weekly Relative Strength Index and Moving Average Convergence Divergence trends in the lower end of the spectrum, with the momentum shifting slightly some gains can be expected in the subsequent weeks. Nonetheless, cautious trading is still suggested as the equity market is yet to exit from the three year long bear market.

KATHMANDU, Sept 7: The stock market witnessed a highly volatile session on the last trading day of the week. The... Read More...