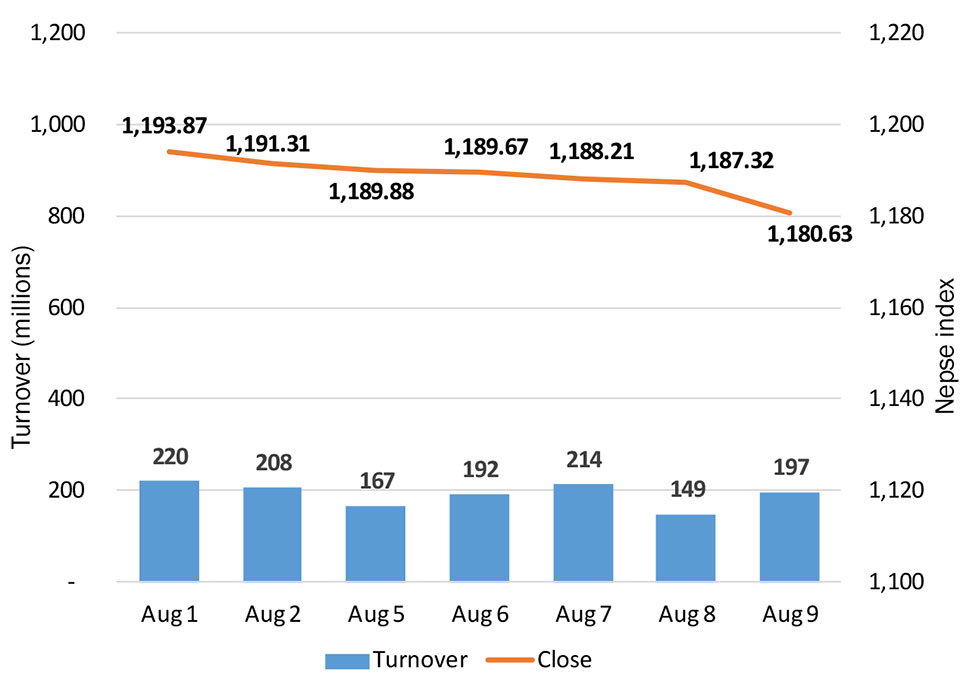 KATHMANDU: The stock market started trading on Thursday on a positive note. Even though the market surged around 2 points initially, the benchmark Nepal Stock Exchange (Nepse) index failed to sustain in the positive side, declining throughout the remaining day. At the end of the week, the index was down by 6.69 points to close at 1,180.63 points.

Shares worth Rs 196 million were traded in the market on Thursday. The total turnover still prevailed below the average mark of Rs 200 million which shows that investors lacks confidence in the equity market due to the absence of any major news to uplift the overall market.

Nepal Life Insurance Company Ltd led the listed companies in terms of transaction amount. Shares worth Rs 31 million of the insurance company were traded in the market on the day. Besides, Support Microfinance Bittiya Sanstha Ltd and Sanima Mai Hydropower Ltd posted turnovers of over Rs 9 million each. Nepal Telecom Ltd, Global IME Bank Ltd and Nepal Investment Bank Ltd were among the active stocks on the day.

As per the ARKS technical analysis, the index which has been posting marginal losses for the past few days, dipped over 6 points on Thursday. However, the downtrend continuation is yet to be confirmed as the index has managed to close exactly above its support of 1,180 points. As a result, a slight correction can be expected on Sunday. However, if the index breaches the support of 1,180 points in the coming session a further slump in the market is likely. Meanwhile, Relative Strength Index (RSI) and Moving Average Convergence/Divergence both indicate the momentum slightly shifting toward negative territory.

KATHMANDU, Sept 23: The Department of Tourism (DoT) has issued climbing permits to a team consisting prince of the Kingdom... Read More...

Nepal’s divorce law is unfair to men
21 hours ago

Dr KC is “emotionally blackmailing” the government: Minister Bhattarai
16 hours ago
Police drag Dr KC out of ambulance, forcibly take him to Trauma Center
18 hours ago