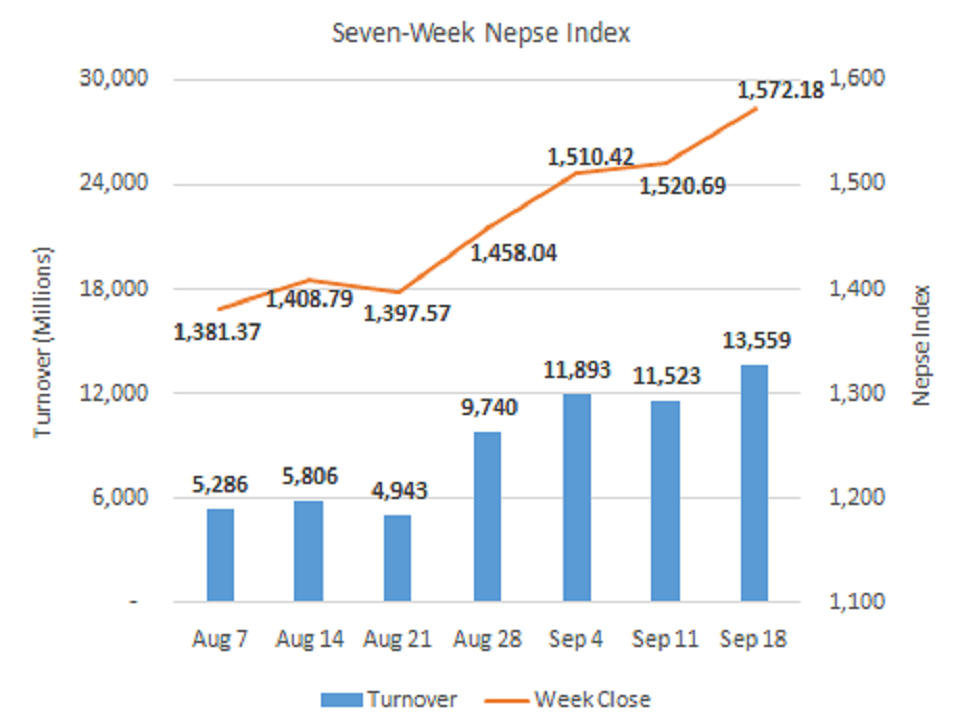 KATHMANDU, Sept 19: The stock market observed a notable strength since the beginning of this week. On Sunday, the benchmark Nepal Stock Exchange (Nepse) index rose 16.56 points, followed by a gain of 3.26 points on Monday. After correcting a modest 4.47 points on Tuesday, the exchange gathered momentum further towards the latter part of the week. The major average added 5.36 points on Wednesday, while the index capped this week’s trading on a firmly positive note with a 30.78 points jump. Consequently, the gain tally for the week stands at 51.49 points or 3.39% with Nepse finishing at 1,572.18.

The week’s gain also saw the index stretch its rally to four weeks inching closer to February’s closing high of 1,632 points. Hence, the sentiment remains highly upbeat in the current juncture with more investments being poured into the equity market. The number of secondary market investors, as reflected in the number of brokerage account numbers, has also seen a massive surge in the past months. With interest rates on deposits being halved by most financial institutions, the secondary market is now seen as a more lucrative option for investment, which is fueling the market’s performance of late. Weekly turnover jumped to over Rs 13 billion, highest since trading resumption after lockdown.

Class ‘A’ stocks, which were underperforming the broader market in the past weeks, also saw remarkable strength. The Sensitive Index jumped 3.69%. Among sectors, Hotels segment rallied sharply and closed the week 23% higher. Hydropower sub-index also rallied almost 17%. Finance and Development Bank sectors also witnessed notable enthusiasm as the respective sub-indices rose 6.65% and 4.31%. Life Insurance and Banking stocks were the other major weekly gainers closing higher by over 3% each. All other segments ended in green, while only Trading, Manufacturing & Processing and Microfinance sectors corrected slightly.

Among actives, Nepal Reinsurance Company Ltd was traded the most in the review period. Over Rs. 824 million worth of its shares changed hands. Nepal Life Insurance Company Ltd followed suit with a turnover of Rs. 531 million. Nepal Bank Ltd and Neco Insurance Company Ltd also saw marked interest with turnovers of Rs. 410 million and Rs 392 million, correspondingly. Citizen Investment Trust, Shivam Cements Ltd and Shikhar Insurance Co. Ltd were the other top turnover stocks in the week on review.

On the weekly timeframe, the index formed a strong bullish candlestick reflecting considerable strength in the equity market. The breach of 1,550 points mark also suggests that bulls have gained firm control in the current juncture. Both Relative Strength Index (RSI) and Moving Average Convergence Divergence (MACD) are trading in positive territory reflecting the upward movement backed by considerable momentum. Towards the upside, the index is likely to test the resistance at 1,632 points in the coming week, whereas support lies at 1,550 and 1,500 psychological marks.

KATHMANDU, Oct 23: The much-anticipated clean feed policy in television systems in Nepal will be implemented from midnight, Oct 23. Read More...