Stealth candidate Theresa May to be Britain's next PM 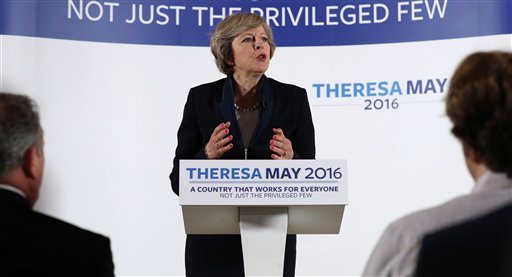 LONDON, July 11: After all of the flamboyant characters and very public backstabbing in the race to become Britain's next prime minister, the winner turned out to be an understated workhorse who maintained a low profile throughout the campaign.

Home Secretary Theresa May, 59 is not well-known internationally, but she has served for six years in one of Britain's toughest jobs, playing an important role in counter-terrorism policy, and now will take charge of delicate negotiations to separate Britain from the European Union.

She was less visible — and less talked about as a likely future prime minister — than Treasury Chief George Osborne and former London Mayor Boris Johnson, but she proved to be the stealth candidate, outmaneuvering both in the intense competition to follow Cameron at 10 Downing Street.

During the EU referendum campaign, Osborne was passionate about remaining in the EU, and lost his leadership hopes when voters turned the other way. Johnson led the campaign to take Britain out of the EU, but never formally entered the leadership race because of dwindling support among his party's lawmakers.

By contrast, May stayed largely out of the referendum fray. She tepidly backed remaining in the EU in a single speech, then remained largely out of sight as the behemoths of the Conservative Party — including Cameron and Justice Secretary Michael Gove — did each other in.

Her triumph is no surprise to colleagues who say she is cool and calm under pressure. She has grown in confidence and stature after six years in the limelight, projecting authority in front of TV cameras that once made her nervous. She is not flashy, does not call attention to herself, and had seemed content with her public role as a loyal Cameron backer.

There is no doubt she has her critics. Conservative Party elder statesman Kenneth Clarke last week called her a "bloody difficult woman" in an unguarded moment when he didn't know he was being filmed.

In her brief, successful leadership campaign, she took a more populist stance somewhat at odds with her "law and order" image. She emphasized the need for more equal opportunity and fairness within Britain.

As home secretary, May has earned a reputation as a reliable, even-tempered minister who capably ran a sprawling department responsible for counter-terrorism policy, policing, immigration, border control and drug policy.

She was criticized at times for problems with border staffing but generally got high marks from politicians and the media while taking a hard line on national security matters and calling for the easier deportation of extremists.

She took steps to limit the "stop and search" powers of police and used her position to criticize police and fire departments for lacking diversity.

May ran a largely scandal-free department and managed to keep her personal life out of the news — the only exception being a slight media fascination with her impressive collection of shoes. She has spoken out at times about living with diabetes and colleagues have said they don't believe the illness will have any impact on her ability to serve as prime minister.

May is a vicar's daughter who came up through Conservative Party ranks, working behind the scenes at her local Conservative Association before becoming a city councilor in a London borough, then entering Parliament in 1997. Her position within the party was helped when she served as its chairwoman in 2002 and 2003.

Like several other top leaders in her party, May was educated at Oxford. She worked at the Bank of England and other financial institutions before entering politics. She has been married since 1980 and has no children — which was briefly a bone of contention during the abbreviated leadership campaign when a rival suggested having children made a person better qualified to serve as prime minister.

Stressing her extensive experience near the top of government, her campaign for the top job was launched with the slogan "Theresa May is ready to be prime minister from Day One."

Day One will be Wednesday, when she is expected to visit Queen Elizabeth II at Buckingham Palace before assuming her formidable new role.

House meeting rescheduled for second time, next meeting at 5 pm

KATHAMANDU, May 23: Following the obstruction by the lawmakers of CPN-UML, the meeting of Legislative-Parliament has been postponed for the... Read More...

British PM David Cameron to resign on Wednesday
6 years ago