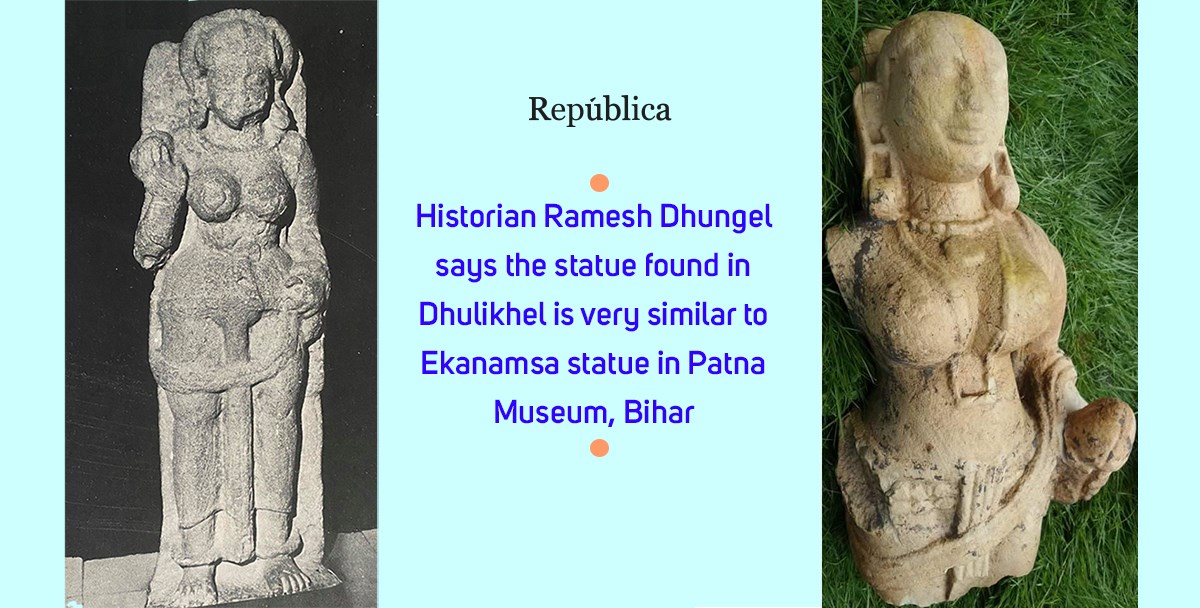 "We had little knowledge about the origin of the statue. However, after some inspection, we found that its origin dates back to the first or second century BC," said Damodar Gautam, the director of DoA.

A statue of a goddess, delicately crafted with jewelries on its outline, was found about 300 meters below the surface on the Araniko Highway, in Dhulikhel Municipality-3 of Kavre, by the locals during road construction. The right hand of the statue is amputated and the statue is only up to its waistline.

The locals initially decided to take it home, but was taken to Dhulikhel Municipality after some local historians delineated its cultural and historical importance.

The statue was under the security of the Department of Archeology, local administration, Dhulikhel Municipality as well as the local stakeholders. "It has been taken to the National Museum following security concerns," said Gautam.

"Due to the lockdown, it is difficult to travel back and forth to Dhulikhel for an investigation. We hope to conduct a thorough investigation soon," added Gautam.

In a previous story run by Republica, there were quotes of some local archaeologists who reported that the idol could be more than 3,000 years old.

However, after studying the features of the statue, experts suggest that it could be around 2,200 years old. "The features seen in the statue convince that its origin ranges from second century BC to the first century. That is approximately 2,200 years old," said Dr. Ramesh Dhungel, an eminent archaeologist and historian.

Director Gautam said that the statue could not be older than 2,500 years.

Moreover, Dhungel said there are staggering similarities between the statue and a first century idol named 'Ekanamsa' from Patna Museum.

"The features of the recently found statue in Dhulikhel coincides with the features of Ekamansa that dates back to the first century. So the statues could be from the same era," he said.

Ekanamsa and the recently found statue in Dhulikhel:

According to Early Sculptures of Nepal, written by prominent art historian Lain Singh Bangdel, Ekanamsa is a female idol whose origin traces back to the first century BC. It is placed in Patna Museum of Bihar, India.

This exquisitely crafted statue of a female deity has jewelries like beautifully designed headgear, earrings and necklace. With a slightly curvy body, wearing a carefully draped skirt, Ekanamsa is a pure representation of an ancient Hindu goddess.

The recently found statue also has similar features. "This idol has fine details of a high-class jewelleries. It has a long earring and double layered necklaces. Although the lower body part is amputated, the skirt is draped perfectly, like in the Ekanamsa statue," said Dhungel.

Dhungel stated that the statue could be of a Hindu deity or a representation of a 'mother goddess'.

He also pointed out that although the statue is thought to be of a Kirati woman, there is not much evidence to support the speculation. "The idol certainly has Mongolian facial features but other details present a contrasting opinion," he added.

Television series “The Crown” might have won millions of fans across the globe with its dramatization of the life and... Read More...

130th birth anniv of historian Acharya to be celebrated