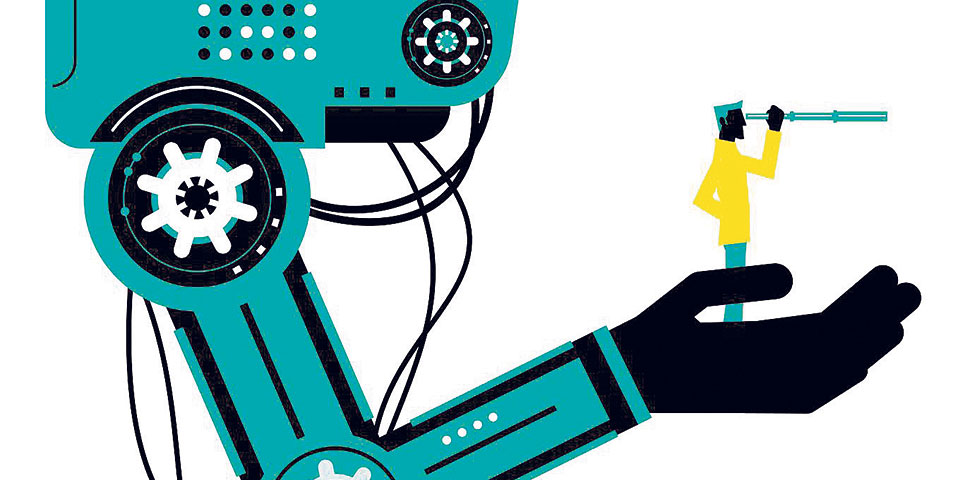 LONDON – The following account should sound familiar. Over the course of decades, feats of innovation re-engineer society, diffuse across countries and regions, and fundamentally alter every facet of life. Politicians, slow to respond to new challenges, centralize power and pursue older, more familiar forms of control, be it traditional statism, aggressive nationalism, or both. But technology continues to force change, and inevitably re-orders the political, economic, and social settlement.

This description applies both to the first Industrial Revolution and to our current moment. One way or another, the wave of technological revolution underway today will require a new theory of state.

In the nineteenth century, a confluence of social, scientific, and economic factors created the conditions for the rise of the modern nation-state. And within a couple of generations, life had changed dramatically, with population growth skyrocketing, incomes rising, and life expectancies increasing substantially. In the United Kingdom, the 1832 Great Reform Act and various innovations in media brought far more people into the political process. Newspapers like The Guardian and The Economist became increasingly influential in shaping public debate. But the reforms of the period were mostly in response to crises, rather than the result of dispassionate analysis and careful deliberation. Having been born of revolution, democratization always threatened revolution anew.

Initially, the Industrial Revolution was met with a policy of extreme laissez-faire, because that was the best way for the land-owning aristocracy to safeguard its privilege. Not until the rise of the Liberal Party, under the guidance of thinkers such as Leonard Hobhouse, did collective action start to yield more positive freedom for average citizens. These progressive forces, including some of the founders of the Labour Party, ushered in an era of radical policymaking that would eventually yield a new social contract.

Like today, this earlier period was marked by political divisions between old and new, tradition and modernity, and open and closed systems. And, like today, the political movements that proved most effective were those that understood the nature of the change that was occurring.

Technology is once again upending longstanding institutions and bypassing traditional gatekeepers. Those who can master the dynamics of the current revolution and offer a new model of state will become the next great force in politics.

At the heart of today’s revolution is the process generally known as globalization. Never before has it been so easy to move people, information, capital, and goods around the world. In the first Industrial Revolution, a new middle class came to be regarded as “social fields for the imported pineapple to conquer.” Today, countless goods are just a click away.

Meanwhile, societies that have opened up their digital borders can now import a vast cornucopia of information. The Internet is an imaginarium facilitating the constant generation of new ideas and enrichment of knowledge. Those who make the best use of it will thrive in the economy of the future.

But, as always, there are tradeoffs. The Internet has also provided a platform for extremists and demagogues to sow discord and polarization. And in closed societies, the digital revolution has become a centralizing force, providing authoritarian regimes with even more powerful methods of social control.

Confronted with rapid technology-driven change, forces on both the political left and right have seized on different forms of discontent. On the right, the dominant response has been nationalist, capitalizing on the sense of security that many people derive from group identity during periods of deep uncertainty and loss of control. On the left, originally the champion of labor during the Industrial Revolution, the focus has been on workers “left behind” by globalization. This reaction has also fallen into a typical pattern, with the proposed solution being to turn back time and give the state greater control, rather than pursue modernizing reforms.

Against this backdrop, very few politicians are talking about how technology can be used to transform society for the better. Debates about whether the state is too large or too small are outdated; the question is whether the modern state is agile enough to foster innovation, competition, and broad-based flourishing in the new economy.

To that end, governments should be reorienting themselves around the new technologies, cultures, and operating models that are already evolving organically on their own. And they should be exploring new avenues of innovation in areas such as education, health care, and climate policy. One way or another, the widespread adoption of artificial intelligence is coming, and policymakers will have to resolve thorny questions about data governance, privacy, and regulation. And beyond taxation, spending, and traditional regulation, existing systems for delivering public services will have to be adapted to changing realities.

This vision reflects not technological utopianism, but conditional optimism. We should maintain faith in the power of human ingenuity to improve society. And we should encourage progressive leaders to put technology at the center of their political programs, to show that they stand for modernization rather than retrenchment or a return to historically exhausted ideas.

The first Industrial Revolution taught us that the power of technology ultimately rests with people, and that the energy it unlocks should not be held back, but guided toward constructive ends. Those who adapt first will be best positioned to shape the future.

Benedict Macon-Cooney, an economist formerly with the UK Treasury and an adviser to Prime Minister Tony Blair, is currently Head of Technology Futures at the Tony Blair Institute
© 2019, Project Syndicate
www.project-syndicate.org

Why AI Will Not Abolish Work

VIENNA – The diffusion of artificial intelligence (AI) across the economy has raised the possibility—and for many, the fear—that machines... Read More...

Fortunately, beauty mavens the world over, have ingenious tricks to considerably shorten that time. We bring you five lazy girl... Read More...

SURUNGA, May 12: Minister for Science, Technology and Education Girirajmani Pokhrel has said the concept of a model school was... Read More...

Refinance loans of Rs 8.99 billion given to pandemic-hit businesses during mid-July and mid-November
31 minutes ago