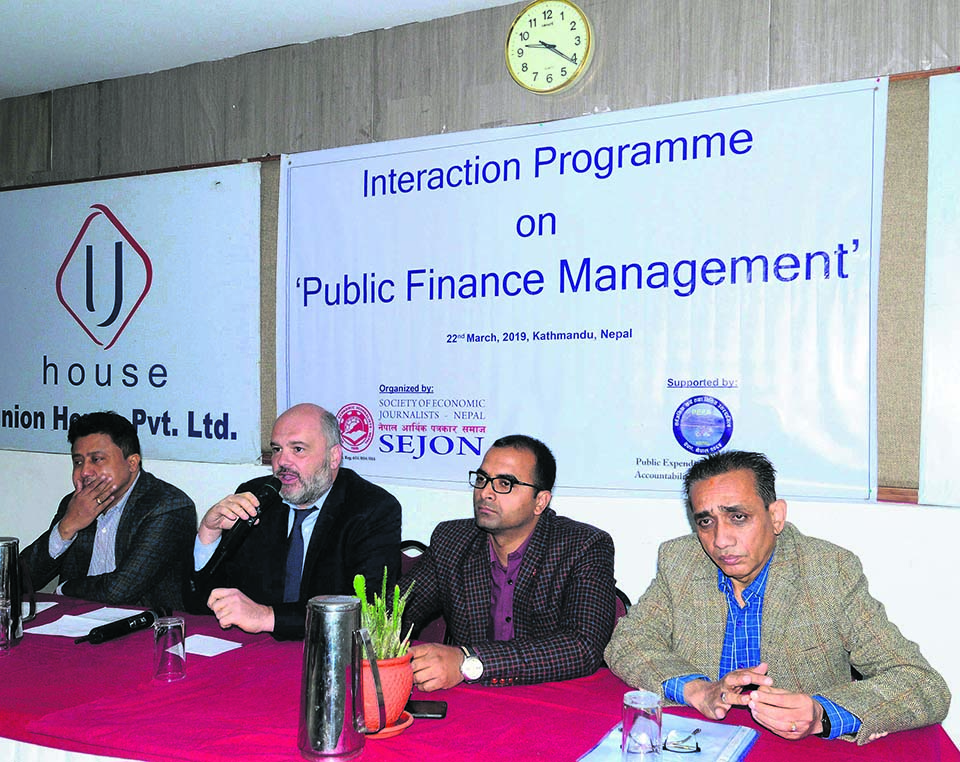 Speaking at a meeting on 'Public Finance Management' organized by Society of Economic Journalists-Nepal (SEJON) with the support of Public Expenditure and Financial Accountability (PEFA) secretariat on Friday, they also pointed out various challenges for effective public finance management in the new federal system of the country.

"As the country is implementing fiscal federalism, there are challenges related to institutional capacity, fiscal capacity, and technical capacity," said Baikuntha Aryal, secretary at National Natural Resources and Fiscal Commission.

"For the allocation efficiency of resources, the capacity of the Ministry of Finance alone is not adequate. All spending agencies should have similar capacities," he added.

Also speaking on the occasion, Hari Saran Pudasaini, joint secretary at the Ministry of Finance, pointed out the problem of lack of database and reporting system at the sub-national level. He also said that the lack of functionaries at the local levels have led to the poor execution of capital budget.

"We have handed over the functions and finances to the local level governments. But, there was delay in sending functionaries, which has led to low spending of the capital budget, particularly that should have been spent through local-level governments," added Pudasaini, who is the chief of Budget and Program Division at the Ministry of Finance.

Sushil Pandey, coordinator at the PEFA Secretariat, said that public finance management in recent years was getting linked with the macro-economy of the country, rather than being limited to the budget cycle.

Franck Bessette, lead financial management specialist at the World Bank Office in Nepal, said public finance management was a core part of democracy. He said that having the right and experienced people able to prepare, discuss and implement the budget and do procurement works at the local levels in the new federal system remained a challenge.

Powerful stories from around the world in Kathmandu

KATHMANDU, Jan 18: In a bid to promote mass transportation in the Kathmandu Valley, the Department of Transport Management (DoTM)... Read More...

KATHMANDU, Nov 6: The intensity of cold has increased across the country as opposed to last year, with the atmosphere... Read More...