Organized jointly by Nepal Tourism Board (NTB) and Pacific Asia Travel Association (PATA) Nepal Chapter, among others, this is the third edition of the annual business-to-business (B2B) program that brings together global buyers and Himalayan sellers as well as other tourism stakeholders from across the globe.

While previous editions strived to promote Nepali tourism scenario in the global market and present Nepal as “Gateway to the Himalayas”, HTM 2019’s focus will primarily be on “Spirit of the Himalayas”, according to the organizers.

Sunil Shakya, chairperson of PATA Nepal Chapter, said that the event will focus on the spiritual aspects of the Himalayas. “Tourism is a dynamic field, and it is necessary to adapt to the changes in the market,” Shakya said in a press meet organized in Kathmandu on Monday. “Keeping in mind the gradual shift of consumers toward spiritualism from materialism, we’ve decided to include yoga packages, meditation schemes and Ayurveda products among our other products as a pledge to promote spiritualism,” he added.

The organizers have also arranged pre-mart tours for hosted buyers as well as journalists and bloggers to acquaint them with Nepal’s tourism products and services.

Also speaking at the press meet, Deepak Raj Joshi, CEO of NTB, hailed the program as an example of a successful private public partnership, saying that the event will play a crucial role in the promotion of ‘Visit Nepal 2020’ campaign in the international market. He also stated that HTM is an ideal summit for many tourism stakeholders as it comprises of insightful conferences, FAM tours, and business sessions for traders.

According to the organizers, HTM 2019 will have sellers from six Asian countries -- Nepal, India, Bhutan, Pakistan, Tibet (China) and Thailand, whereas 58 buyers from 30 different countries, including the US, Russia, Australia and New Zealand are participating in the event.

The event is largely supported by sponsorship deals from private sector and certain assistance from government accounts. According to the organizers, 75% of the total budget of the 2017 edition of the event was reportedly financed by the private sector.

The estimated budget of HTM 2019 is Rs 50-60 million, according to the organizers. 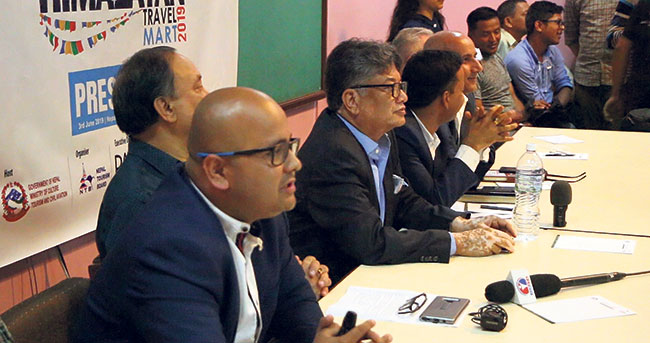 KATHMANDU, May 21: In a bid to compensate the losses incurred by the country’s tourism industry due to COVID-19, Nepal... Read More...

Nepal promotes itself as ‘Lifetime Destination’ in western India

KATHMANDU, Jan 23: Nepal has reached out to promote itself as a 'Lifetime Destination' in western India through a sales... Read More...

More than 50 people missing in Melamchi flood
2 hours ago

Incessant rainfall triggers flood in Manang, most houses in Taalgaon inundated
20 hours ago
Nepal received over Rs 800 billion in remittances in 10 months
21 hours ago

More than 50 people missing in Melamchi flood
2 hours ago