SRH beat RCB by five runs, all but through to play-offs 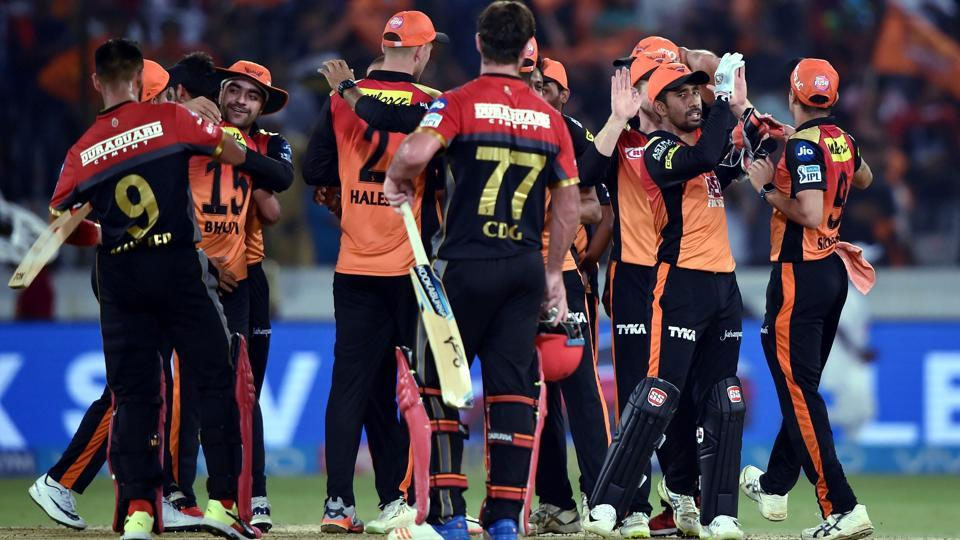 Sunrisers Hyderabad are almost through to the Indian Premier League (IPL) 2018 play-offs after beating Royal Challengers Bangalore on Monday.(PTI)

Sunrisers Hyderabad’s bowling prowess came to the fore yet again as they made short work of Royal Challengers Bangalore in their IPL 2018 match here on Monday. Chasing 147, RCB could manage 141/6 in 20 overs.

After RCB were reduced to 84/5, Mandeep Singh (21*) and Colin de Grandhomme (33) took the team close with 12 needed off the last over by Bhuvneshwar Kumar. But the duo could manage only six runs.

With this win, SRH consolidated their top spot in the table with 16 points from 10 games. On the other hand, RCB, with six points from 10 games, will now have to win all their remaining four matches and hope other results go their way to qualify for playoffs.

There has been nothing beyond Virat Kohli and AB de Villiers in RCB’s batting this IPL. Monday was the same. Kohli came to the crease early after Parthiv Patel departed in the third over. His fluent strokes on a slow pitch were a treat to watch as he went after Shakib Al Hasan and Siddarth Kaul.

Though Manan Vohra departed in the eighth over, RCB stayed on course with Kohli and De Villiers at the crease.

First, Kohli was caught by Yusuf Pathan at short third man. Then, De Villiers was bowled by Rashid while attempting a cut. Moeen Ali followed them in the 12th over as RCB stared at defeat.

There was hope still but Mandeep and de Grandhomme’s 57-run stand was not enough at the end.

Earlier, SRH’s batting was all about captain Kane Williamson (56), as has been the story in most of their matches so far. Except Shakib Al Hasan (35), none of the other batmen crossed 15 as SRH slumped to yet another sub-150 total.

After SRH lost openers Alex Hales (5) and Shikhar Dhawan (13) inside the powerplay, it was time for Williamson to take charge. On a slow wicket with variable bounce, he took his time to settle down as SRH lost their third wicket, of Manish Pandey (5), in the ninth over.

There was a brief lull as Williamson and Shakib concentrated on picking singles and twos. It was only in the 14th over by Umesh that Williamson broke the shackles with a four and six at square leg. He followed it with another one off Chahal at midwicket en route to completing his fifth half-century of IPL 2018.

Williamson and Shakib’s 47-ball 64-run fourth wicket stand ended in the 16th over when he was caught by Mandeep at backward square leg off Umesh while trying to go for a wild heave. Shakib followed soon after as Tim Southee and Mohammed Siraj cleaned up the lower order. SRH became the first team to be all out twice this season.