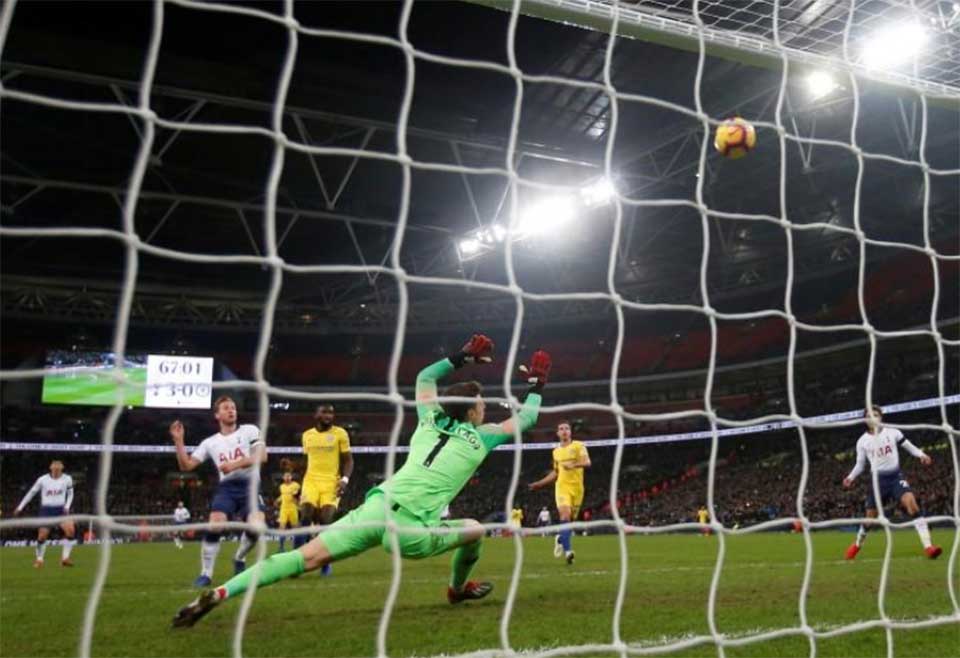 LONDON, Nov 25: Tottenham Hotspur ended Chelsea’s unbeaten start to the Premier League season with a breathtaking display of attacking football at Wembley that saw them seal an emphatic 3-1 win and refresh their title challenge on Saturday.

The win moved Spurs up to third but unbeaten Manchester City still looked in a class of their own at the top as Leroy Sane scored twice in a 4-0 stroll over West Ham United at the London Stadium.

It put City onto 35 points from 13 matches but nearest pursuers Liverpool, also still unbeaten, remained just two points behind the champions, keeping up the pressure with a 3-0 win at Watford.

Much had been made of the unbeaten runs of City, Liverpool and Chelsea but Spurs had, quietly, made an impressive start to their own campaign and were at their brilliant best at a raucous Wembley.

After City and Liverpool had won, the writing was quickly on the wall for Maurizio Sarri’s men in the day’s late fixture as Chelsea went 2-0 down inside 16 minutes to goals from Dele Alli and Harry Kane.

Spurs added a sensational third when Son Heung-min carried the ball from inside his own half, beat two men with ease before finishing neatly.

Substitute Olivier Giroud added a late consolation for Chelsea but Spurs’ win moved them on to 30 points, now two points clear of their London rivals.

“We created a lot of chances. If we had been more clinical we could have scored more, it was a great performance by everyone,” Alli told BT Sport.

Worryingly for the rest of the league, City manager Pep Guardiola felt his side could have played much better.

“We are a humble team and today we weren’t at our best, too many touches, our passing was not good enough but our running was fantastic,” he said.

Juergen Klopp’s Liverpool had to be patient at Vicarage Road but were rewarded when Mohamed Salah, Trent Alexander-Arnold and Roberto Firmino netted late goals that subdued Watford. The only downside was captain Jordan Henderson being shown a red card for two bookable offences but Klopp was more focussed on his side’s spirit.

“I think it (the result) tells the story because we stayed stubborn, they defended and counter-attacked so we had a few really good moments we didn’t score which is not a big problem if we stay on track.

“How we closed down the game was just brilliant especially the third goal.”

Elsewhere, Manchester United failed to close the gap on the top four as they were held by Crystal Palace – the sixth time they have failed to win in the league at Old Trafford this season.

“Frustrating,” United manager Jose Mourinho said. “The objective was to start well this period of eight matches until December. We did not win one point, we lost two. We did not have enough aggression or intensity to kill.”

Claudio Ranieri celebrated a winning return to the Premier League as his Fulham team moved off the foot of the table with a thrilling 3-2 victory over Southampton at Craven Cottage.

Two goals from Aleksandar Mitrovic helped Fulham record their first top-flight win since August to make it a dream first game in charge for Ranieri.

“It was important to come back and come back with a victory. It is a little step but important for the enthusiasm and everything.” the Italian said.

Brighton thought they were heading for all three points after Glenn Murray put them ahead early in the first half and James Maddison was sent off after 30 minutes.

Everton moved into the top six as Gylfi Sigurdsson’s close-range finish after 59 minutes sealed a 1-0 win over Cardiff City who remained in the bottom three.