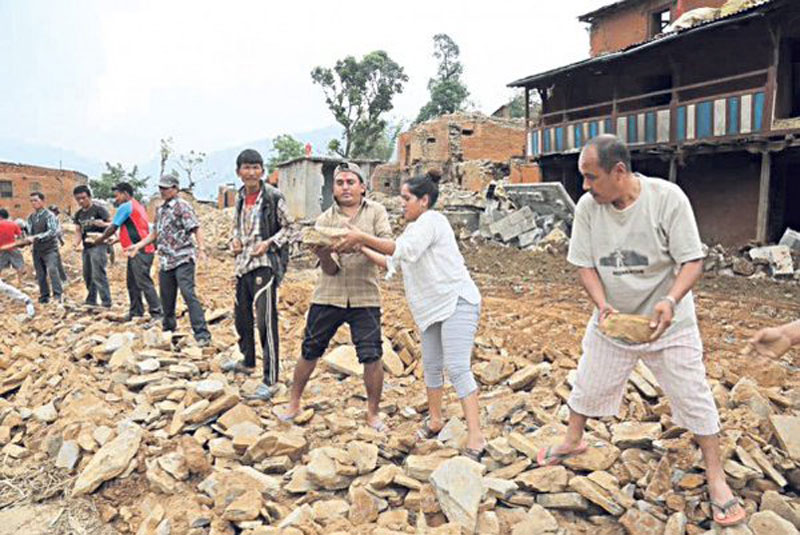 It’s important to assess if we have done enough to inform people to save their lives and properties if another big earthquake hits Nepal
It was just another cozy Saturday morning until the clock nearly struck 12 pm and things started falling off and apart, bringing down houses, temples, and towers. Trapped in between and under these fallen parts were lives of newborns, toddlers, adolescents, youngsters, mid-aged, elderly, and disabled. It was not a battle people of any age were really prepared to fight with. It was the earthquake of April 25, 2015.

Around the 19th Earthquake Safety Day on Sunday, January 15, it is worth recalling the lives taken and properties lost; the efforts from all spheres to bring normalcy back, support the most affected, and rebuild houses and other infrastructures better and safer.

Then ask those involved in providing short and long-term support to the earthquake survivors—are we preparing for the next big one?

Unlike many other natural hazards, earthquakes strike suddenly and without warning, and in a matter of seconds, it can take lives of thousands and properties worth trillion rupees.

It was known that a large-scale earthquake was imminent in Nepal but no one could exactly predict when, thus people in urban areas thought making earthquake-resistant houses would be expensive and those in the rural areas did not know much about the resilient structures. Thus buildings started gaining storeys in Kathmandu and open spaces simply disappeared. Thanks to uncontrolled and unplanned urbanization.

When finally the earthquake struck in April 2015, people struggled to find spaces where they could live in makeshift shelters. Roads, pedestals, and miserably remaining agricultural land became their temporary shelters. It’s been nearly two years since we saw the scariest earthquake of our lifetime but there have not been tangible efforts to preserve these open spaces. Where will people set up their tents if an earthquake of similar magnitude strikes again?

Messages most heard
After the 2015 earthquake, what common people have been mostly hearing are negative news—government not providing grants to the people who lost their houses, non government organizations spending a lot of money on vehicles and rents. The news of National Reconstruction Authority being set up and getting defunct with its Chief Executive Officers being reinstated or removed made headlines. The news of months’ long blockade also made headlines of national and international media—its effect on the already affected population and the need to lift it. But what has not been heard enough is the ways to win the battle against earthquakes.

There are serious questions that need convincing answers. How can people living in highly clustered areas minimize risks of earthquake? Should they wait in the house until the shake stops or should they run through the narrow alleys that have wooden planks crisscrossed to support the cracked old houses?  Or should they just drop, cover, and hold on? We have also seen that the earthquake safety messages were not very effective as the people who were outdoors on April 25 went in their houses to duck their heads thinking it would be safer but unfortunately were crushed by their own houses.  So what should be the strategy?

The government and non government organizations must assess people’s knowledge about building back better. Does it mean living in concrete houses or houses made from prefabricated materials? Can resilient houses be built at affordable cost? Should houses be only two storied? Does building code apply to only those who do not have access to power? If not, why are buildings built in lands not authorized for construction still standing intact? If a family doesn’t have land documents for various reasons, should they be deprived from government support to live in safer houses? It will be two years since the earthquake-affected families have been looking for this kind of information.

The tectonic plates underneath Nepal are dangerous, the collision of which could wreak disaster anytime. A recent report in a British journal Nature Geoscience says a major tremor could hit Gorkha district within years rather than centuries. How prepared is Gorkha district? And how prepared is the country to withstand such a disaster? In order to raise awareness and inform public about the safety requirements to deal with earthquake, the government started marking Earthquake Safety Day, on the day the 1934 earthquake badly affected Nepal. The 8.4 magnitude earthquake of that year left more than 5,000 people dead, 25,000 injured and around 60,000 houses destroyed.

After the 7.8 magnitude earthquake hit Nepal, Chile was hit by what is the world’s strongest earthquake until today—8.3 magnitude earthquake in September 2015. However the casualty was minimum—13 fatalities. What was magical about Chile? It was the same country where 28,000 people had lost their lives in 1939’s earthquake. Well, Chile had learnt its lesson. Chile’s building codes required the buildings to survive a 9.0 magnitude quake, which resulted in less damage of properties and lives. Additionally, Chile was successful in getting about a million people timely evacuated to safer places. Nepal could definitely learn from Chile.

What can be done?
Considering the Chilean example, the Department of Urban Development and Building Construction should ensure that the new houses being built can sustain earthquakes of high magnitudes. Likewise, disaster preparedness should be mainstreamed at schools, hospitals, public places, media houses, and anywhere possible.

Geological surveys should be done at places severely affected by earthquakes. Some people I met from Kerauja of Gorkha district shared with me that they suffered more than the people of the epicenter, Barpak. Inaccessible by roads, the people in Kerauja were already affected by earthquakes and then landslide struck and they were completely displaced. They don’t even know if the land of Gorkha is geologically safe for settlements.

Som Gurung from Kerauja said, “We have been displaced, and we don’t know where to go.”

Media should, as a part of their social responsibility, continuously give message to the public on disaster preparedness.

These volunteers were in the forefront in places like Kirtipur carrying out search and rescue operation, setting up camps and providing first aid treatment immediately after the earthquake struck on April 25, 2015. Likewise, pre-positioning of water plant at NARC (Nepal Agricultural Research Council), Tribhuvan University, and the Teaching Hospital became vital to respond to the survivors. Water from NARC was supplied to people living in the IDP camps in Tundikhel for drinking purpose, two days after the earthquakes.

At the household level, people should be able to know the risks of earthquake and the ways to mitigate the damage by doing minor things such as fastening or securing tall, heavy or expensive objects that can move, break, or fall like bookcases, home electronics, and items hanging from walls or ceilings with nylon straps or relocating them away from beds and seating.  Lastly, the government must enact a new Disaster Risk Management Bill

While we can watch the level of Koshi River rising to predict a flood, we cannot know well in advance if earthquake is approaching. Intensity will be unknown too. People can predict a tsunami after an earthquake, but the earthquake itself does not give any hint of its arrival. The nightmares people still suffer after experiencing the earthquakes of 2015 will continue to haunt them until the day they can ensure an earthquake-safe environment.

PALPA, Dec 24: HIV patients' failure to take medicine regularly and to follow doctor's prescription has taken its toll on their... Read More...

MoFA asks missions to drop use of word 'Nepalese'

KATHMANDU, Aug 29: Ministry of Foreign Affairs on Sunday has asked Nepal's embassies and the offices of consulate general around... Read More...

Fertilizers will be provided to farmers: MP Dong
14 hours ago
Legal practitioners stage sit-in at the main gate of SC to bar suspended CJ Rana from resuming office
15 hours ago