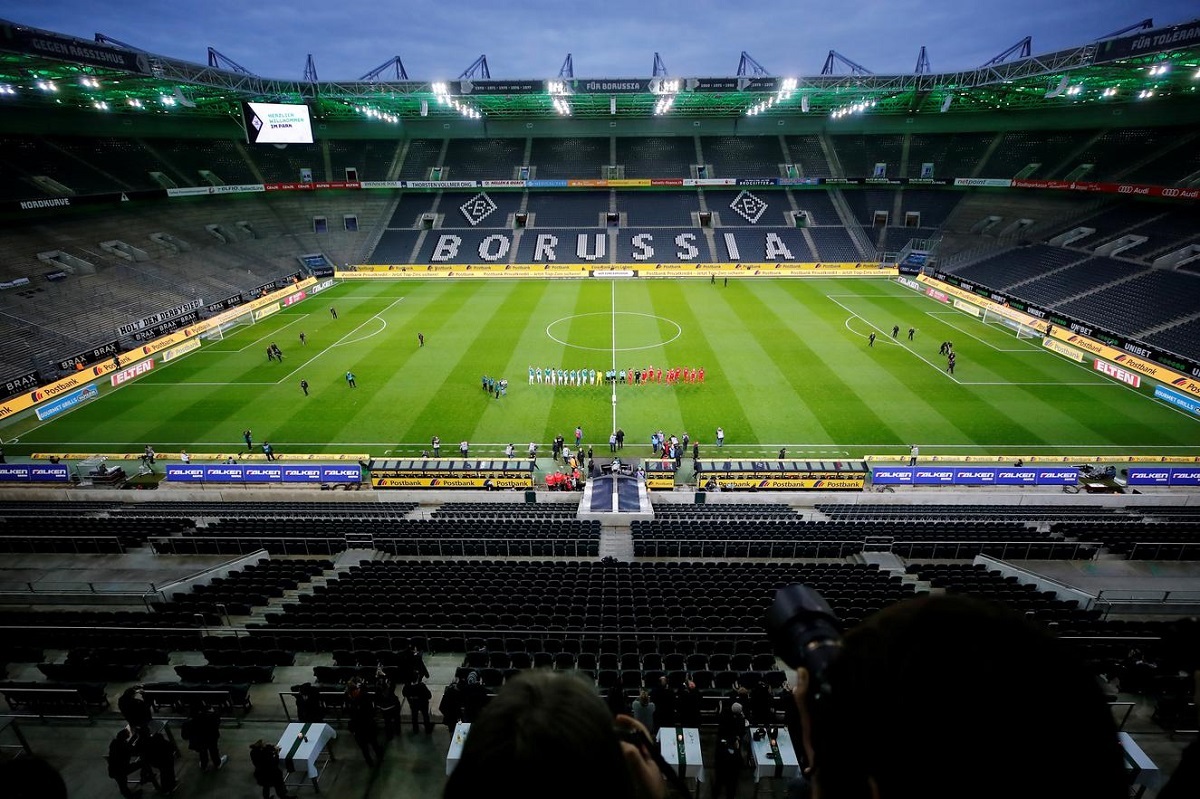 FILE PHOTO: Soccer Football - Bundesliga - Borussia Moenchengladbach v FC Cologne - Borussia-Park, Moenchengladbach, Germany - March 11, 2020 General view as the players from both teams and officials line up on the pitch before the match that will be played behind closed doors while the number of coronavirus cases grow around the world REUTERS/Wolfgang Rattay/File Photo

BERLIN, May 16: The gaze of the sporting world will fall on Germany this weekend as the Bundesliga becomes the first major soccer league to emerge from the shutdown caused by the coronavirus pandemic.

All 18 clubs will crank back into action in what could act as a catalyst for other leagues to follow suit.

Strict health and safety protocols will be in place and stadiums will be empty for the so-called ghost games.

Topping the bill will be the Revierderby between Borussia Dortmund and Schalke 04 — a fixture that would normally be played out in front of 80,000 raucous fans.

This time there will be eerie silence with only around 200 people pitchside and in the stands, including medics, security, hygiene staff and certain media personnel.

Everyone except the players must wear a mask.

“It will most certainly be the most unusual derby in history,” Dortmund’s head of pro players Sebastian Kehl said this week. “This game lives off fans, their emotions, the intensity of the stadium. We will not experience any of that.”

A heavy police presence is expected outside the

Westfalenstadion to make sure fans desperate to get closer to the action, or anti-lockdown protestors, do not gather — a situation that could throw the restart into doubt.

“We will not allow the derby to be used for any political stirring whatsoever,” Dortmund mayor Mayor Ullrich Sierau told a news conference on Friday.

“If it means a person doesn’t die because of the virus, then we’ll gladly do without the next match.”

While opinion is still divided about the rights and wrongs of top-tier soccer returning while no vaccine is yet available for the killer virus, from a sporting perspective the Bundesliga title race could still turn into a classic.

Dortmund are in second place with nine games remaining, four points behind leaders Bayern Munich who are seeking an eighth successive crown. RB Leipzig are a further point in arrears.

Bayern travel to Union Berlin on Sunday with the hosts likely to be without coach Urs Fischer, who on Wednesday left the team’s mandatory seven-day isolation camp ahead of the season restart. Leipzig host Freiburg while Borussia Moenchengladbach, still in the hunt a further point behind in fourth place, travel to Eintracht Frankfurt.

One change brought in because of the circumstances will be clubs being allowed five substitutions — a move designed to help clubs cope with what could be a pile-up of fixtures.

After a two-month hiatus and no other live action this weekend, a TV audience of one billion is expected to tune in for the weekend’s Bundesliga fixtures, according to Bayern CEO Karl-Heinz Rummenigge.