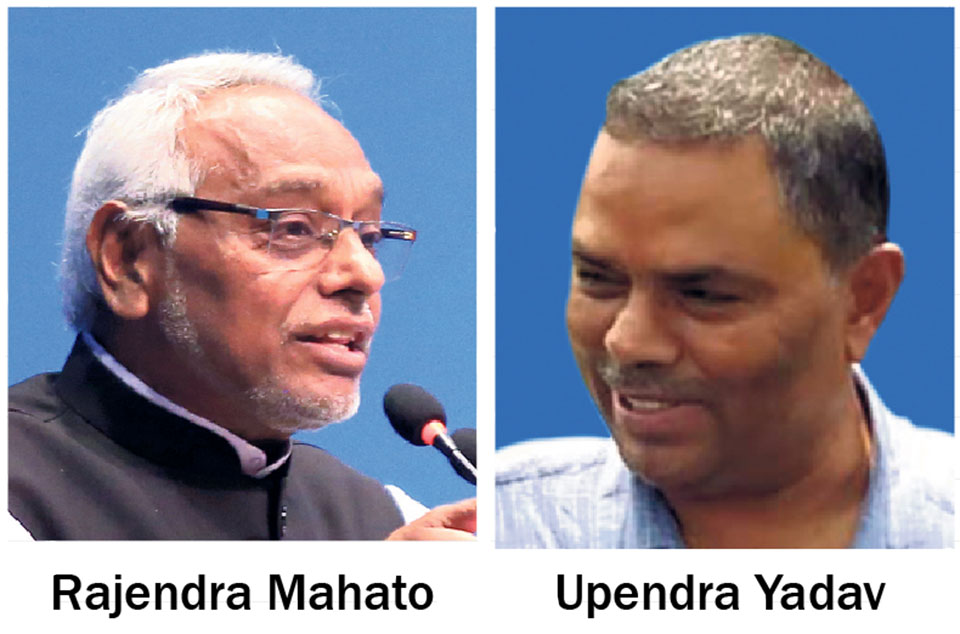 KATHMANDU, July 28: Informal talks between Samajwadi Party Nepal (SPN) and Rastriya Janata Party Nepal (RJPN) to take forward the proposed merger appear to be going nowhere with leaders failing to reach an understanding on leadership and support to the government.

It's been almost two years since the merger was first proposed but formal negotiations are yet to take off, mainly due to RJPN's precondition that SPN walk out of the government first. RJPN leaders are also calling for a prior understanding on the leadership.

Rajendra Mahato, an RJPN presidium member, said that they were still waiting for SPN's response on the matter. RJPN, he added, would take an appropriate decision once there is clarity on the matter.

The precondition has put SPN in a fix. Top leaders are neither in mood to walk out of the government anytime soon or distance themselves from a likely merger.

An SPN leader said that the party ranks and files are against an immediate withdrawal from the government although it remains the possibility once a merger is sealed.

“This has been clearly communicated to RJPN leaders,” he said.

SPN leadership has not been able to make its mind clear on the leadership issue. RJPN leaders say that both parties should have equal status in the merger. They say that there should at least be clarity on leadership model and management of six-presidium member.

Talking to Republica earlier this month, Mahato had said that the informal talks were failing to bear fruits due to SPN's dubious stance. He said that the party was yet to receive clear answers on their precondition.

Senior SPN leader Ashok Rai said that efforts are still underway to start formal merger process. He said that top leaders of SPN including Upendra Yadav and Baburam Bhattarai were having discussions with RJPN leaders.

SPN, which was formed after merger between Federal Socialist Forum Nepal and Naya Shakti Party Nepal, is working to form its committees and political documents.

RJPN and SPN, a coalition partner in Province 2, had first initiated talks before the federal and provincial elections. But it failed to gain momentum due to infighting in the RJPN.

RJPN had earlier formed talks panel in March but the talks have moved at 'snail's pace' since the formation of SPN.