KATHMANDU, June 4: Amid the rising trend of road accidents in the Kalanki-Koteshwor stretch of the Ring Road, the Metropolitan Traffic Police (MTP) has started a campaign to measure and control the over speed of the vehicles with the use of laser-equipped speed gun.

The MTP has said that the campaign is expected to control reckless driving thereby reducing road accidents along the Ring Road.

Traffic police personnel will detect the vehicle’s speed with the use of laser-equipped speed gun along the Kalanki-Koteshwor stretch of the Ring Road.

The unruly drivers will be taken action in accordance with the Motor Vehicles and Transport Management Act, 2049 (1993) section 164 (6). The traffic police will fine up to Rs 500 for the unruly drivers.

"Recent trend shows that most of the road accidents occurred due to the over-speed. With this new system, the unruly drivers will face the music as per existing laws," DSP at the Metropolitan Traffic Police Krishna Dutta Bhatta told Republica Online.

In the initial phase, the MTP has started the system at major intersections along the Ring Road such as Satdobato, Sanepa, Koteshwor, and Kalanki which are considered as the most accident-prone areas in the Kathmandu Valley.

According to data provided by the Metropolitan Traffic Police, a total of 863 road accidents took place along the Kalanki-Koteshwor road section in the past ten months. In these road accidents, 14 people lost their lives in the same period. 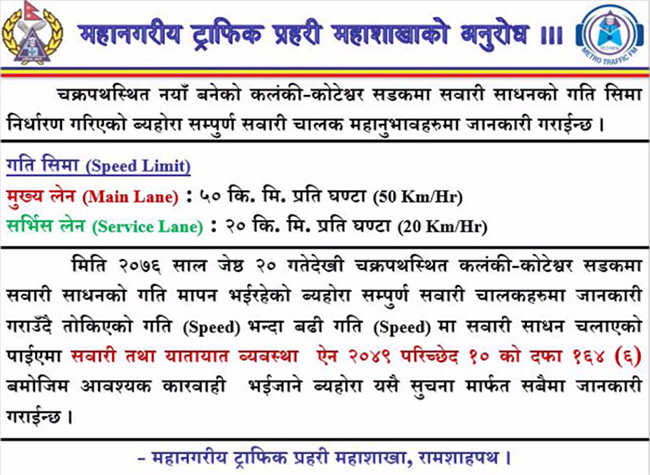 Motorcyclist killed after being hit by Scorpio
4 minutes ago